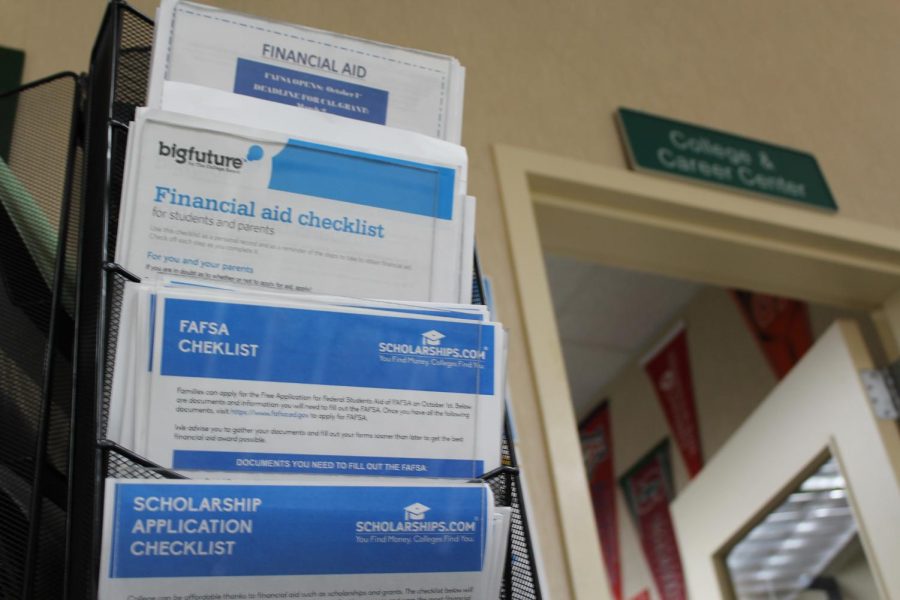 The College and Career Center at GBHS has informational papers regarding financial aid on a paper stand just outside.

Students often dread the fall semester of their senior year for one specific reason – having to complete college applications.

Little do students know that the most stressful part of senior year comes long after applications are sent away – when decisions come back in March.

Seniors accepted into their dream universities and colleges will in some cases turn down offers because the tuition and fees don’t  within their budgets.

“(If I get into one of my top three choices, I) definitely will consider turning down the offer,” senior Brad Davito said. “Some of the schools I’ve applied to will be really expensive. Depending on how much aid I get, I don’t want to put too much pressure on my family over paying for (college).”

Even if the school might be a better fit for the student, the cost might  make attendance a non-option.

“It seems like I have to choose between a more expensive out-of-state school that I’m interested in, or a more affordable school in California that I’m not as passionate about,” Davito said.

Some students will have to put their hopes on hold. But there has been a system put in place to help bridge the gap between a student’s wildest dreams and reality – it’s called financial aid.

Financial aid comes in many different forms and sources.

“The first step should be filling out (the Free Application for Federal Student Aid),” college and career center director Teri Keeney said.

FAFSA can be filled out by all prospective and current college students to receive grants from the federal government. The amount of funds granted to any given student is determined by personal and parental income. The higher a family’s income, the smaller the amount of money a student is likely to be given.

It seems like I have to choose between a more expensive out-of-state school that I’m interested in, or a more affordable school in California that I’m not as passionate about,”

The amount of money a student receives after completing the FAFSA is independent from the price of tuition for any given college. Meaning that if FAFSA grants a student $4,000 per year who is attending a state school, that same student would still get $4,000 if she decided to attend a more expensive private school.

Scholarships are funds awarded to students from institutions, organizations, businesses and universities – money that doesn’t have to be paid back.

“You definitely want to Google search the scholarships at your school – a lot of them will be automatically applied for, but some of them won’t be (and) you might have to apply for them separately,” Keeney said.

Scholarships are awarded for a variety of different achievements and subjects – the key is to find the ones that match up best with each unique individual and apply for them.

“There are several websites to go to for resources, like Scholarship 360 and Sally Mae, College Board scholarships and Going Merry, to name a few,” Keeney said.

“The higher GPA you have, the more likely you’ll get a better scholarship or money off your tuition,” Keeney said. 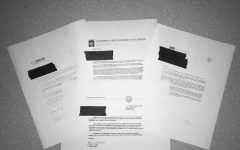 Outside of scholarships, there are alternative opportunities to receive aid through individual schools.

“There is work study where you work in exchange for financial aid,” Keeney said. “They might say ‘we’re gonna cover $4,000 per semester, but you have to work so many hours. Pretty much all campuses offer a work study program.”

These opportunities are generally not widely advertised and often require inquiries at the admissions officers at a given college.

“You can talk to your admission adviser to plan it out beforehand,” Keeney said.

If all attempts to receive financial aid are exhausted and a student’s financial bridge still hasn’t been crossed, there are other options available.

“There are loans, but you do not want to go into debt so that should be your last resort,” Keeney said. “Student loans (are) the biggest debt (category) in the country.”

There are two types of loans available for students to consider: parent and student loans.

“Student loans can be subsidized,” Keeney said. “Meaning you don’t need to pay it back until you finish or quit school, and interest doesn’t start until then either.”