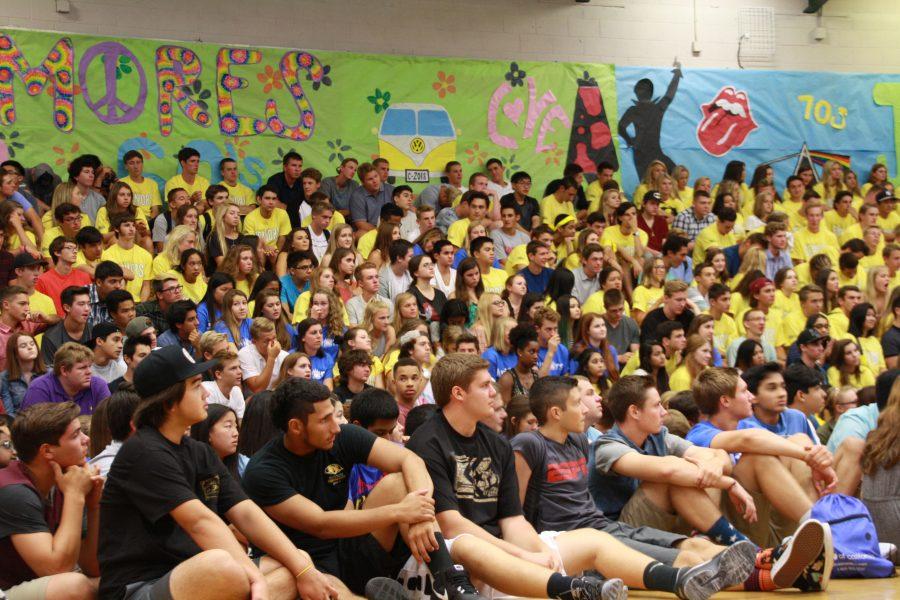 Seniors start the year with an energetic rally, but when times goes on towards college letters emotions ranging from frustration to relief are rising.

Students prepare to embark on the next four years

As May 1 approaches, the decision that has been looming over most seniors’ heads for the past four years is closer than ever.

In two months, these young adults will have to decide where they will spend their next four years as they pursue a college degree.

After having finished the application process in the fall, college acceptances have begun to trickle in.

“I applied to 15 different colleges and am just beginning to hear back from a few,” senior Cate Wolfe said.

Many seniors applied to numerous schools and are not quite sure how they are going to make their final decision.

“Every student is different in regards to where they see themselves after high school,” said counselor Navjot Singh. “When deciding on a college, we have students looks at multiple different things. For example, do you see yourself at a large campus or a small campus? Do you want to stay in California or go out of state? Do you want to play sports? What majors do they offer?”

Justin Mazzola said he is going to consider a few major aspects of the colleges he applied to, to help with his final decision.

“Some students may not get into their dream school and then have to decide between schools they received offers from, but at the end, we want to make sure the student is happy with their choice and is ready/excited to start the next chapter of their life.”

“I am going to consider location, the reputation of the school, ranking of the business program and the community and feel of it,” Mazzola said.

“I’ve visited most of them,” Mazzola said, “and there is definitely a top three for me, so if I get into one of them, my decision will be a lot easier.”

Wolfe said she also has a few favorite colleges from her list of schools where she applied.

Now that the deadline is getting even closer, seniors say they are beginning to get more nervous.

“I check my email every day for college decisions,” Mazzola said, “ I feel a lot more stress because I really want to get into my top schools, and it is very nerve-racking waiting for the decisions to come in.”

English and IB World Religion teacher David Tastor said he saw a lot of emotions from students when he taught seniors.

“I think that the hard part is that you have kids who have busted their butt, and have been told the only reward for busting their butt is UCLA or Cal or Stanford or Penn, but the reality is you bust your butt for whatever comes your way,” Tastor said. “You cannot control any of what happens in an admission office.”

Most college acceptances go out in the month of March, so a majority of seniors are going to be hearing back from a lot of the colleges they applied to – including notifications from the University of California and California State University campuses.

“I am beginning to feel more stressed because UC applications are coming out in March,” Wolfe said.

After hearing from all of the schools students applied to, they will have to make their final decision.

I think that the hard part is that you have kids who have busted their butt, and have been told the only reward for busting their butt is UCLA or Cal or Stanford or Penn, but the reality is you bust your butt for whatever comes your way,”

Singh recommends visiting all options either online or in person.

“We (as counselors) recommend that students take virtual tours or go visit the campus with family and friends during spring, summer or winter breaks, and we also have admission representatives come from various schools and programs in the College and Career Center during the school year,” Singh said. “This gives students opportunities to meet with the admission representative and ask questions about the campus.”

Wolfe said visits and a focus on her future area of study will help her make the final choice.

“I think I will make the decision on my own by touring the colleges and researching my major within each school,” Wolfe said.

Ultimately the final decision is up to students – but it isn’t easy.

“Choosing a best-fit school is difficult for students,” Singh said. “Some students may not get into their dream school and then have to decide between schools they received offers from, but at the end, we want to make sure the student is happy with their choice and is ready/excited to start the next chapter of their life.”

Tastor has a similar perspective.

“I tell students to really ensure what it is like to be away from home, make sure the area is an area where you want to be, that the school offers what you want,” Tastor said.

He said his main concern is for students to make sure they will be happy with their decision and school.

“For kids to be in that place where they feel less than –because they haven’t heard yet, or their friends got in, or ‘I have a higher GPA than that kid’ – and it just becomes really catty instead of just accepting the gift you’ve been given,” Tastor said.