The start date of the commemoration was chosen to be Sept. 15 as it marks the independence days of several Latin American countries such as Costa Rica, El Salvador, Guatemala, Honduras and Nicaragua though Mexico celebrates on Sept. 16 and Chile on Sept.18.

In Mexico, the month is kicked off with a long-standing tradition—el grito de independencia, a shout of celebration of lasting independence by the president as thousands gather below him in the square to scream along.

2021 marks the 211th anniversary of the ‘Grito De Dolores’, or ‘Call of Dolores’, that effectively ended the Mexican War of independence.

In the US, people celebrate with various festivals and recognition of the holidays that fall within the month.

The US government continues to recognize the significance of Hispanic contributions to history and daily society, through exhibits in the library of congress and Smithsonian museums, and through various presidential proclamations and discussions.

In the last 10 years, the Hispanic population has increased by 23% in the United States in comparison to the overall population which grew by only 4.3%, making this month more important than ever. 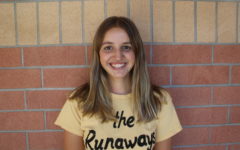 Elise is a senior and Co-editor-in-chief. This is her third year on the Gazette staff.