Course has seen sharp decline in enrollment, with just three current students in the class 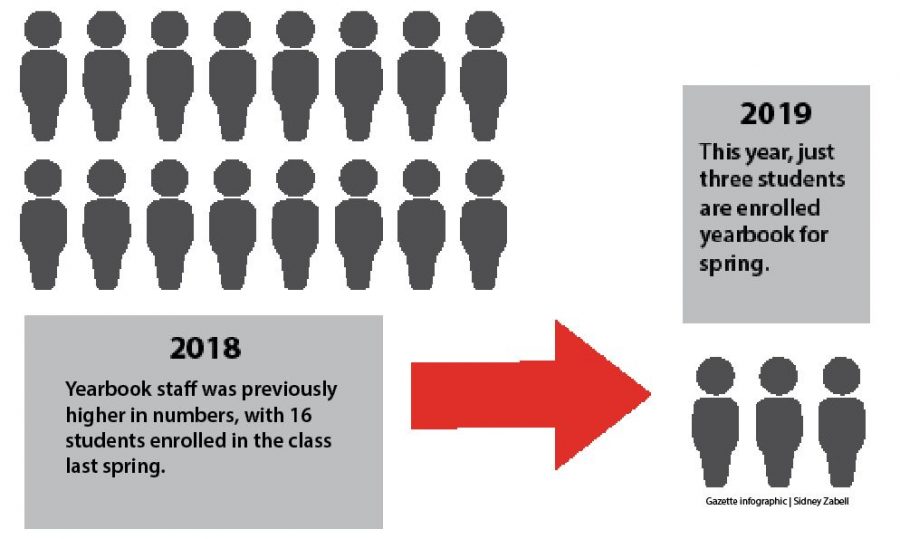 The yearbook elective may have declining class numbers, but they have determination to complete this year’s yearbook!

The Ursus yearbook staff currently consists of just three students, compared to the typical spring staff of more than 20 students.

After combining with the Introduction to Journalism class, there are now 17 students – 14 intro journalism students and three yearbook students – working collectively to complete the 2018-19 yearbook.

Yearbook teacher and adviser Bernadette Cranmer said the size of the yearbook class and other electives at Granite Bay High School has decreased sharply, especially among upperclassmen, as a result of their determination to take weighted classes in the race to finish with the highest possible class rank.

“In my opinion, the pressure for students to have a certain rank in their class and the pressure for students to take so many (Advanced Placement and International Baccalaureate) classes, even if they’re not interested in them, is what’s destroying all these electives,” Cranmer said. “We’ve got students taking four AP classes at a time, which leaves no room for supporting any of the electives that we’ve got here at GBHS – and we’ve got some fantastic ones.”

Junior Ashley Altmann, a yearbook student who plans to become the staff’s editor in chief next year, agreed that many students are pressured to take more weighted classes, but she also thinks some students can’t handle the workload of the yearbook class.

“I do think many people are wary of the class due to the workload, which is a lot, but fail to recognize that if more people signed up, the work for each person would be more evenly distributed and easier,” Altmann said.

Some former yearbook staff members said they decided the tasks and the stress involved in taking yearbook weren’t for them, and that the class was different than they anticipated.

“I didn’t like how I didn’t get to express the creativity that I thought I was going to,” said former yearbook student Clare Thompson, a junior. “I thought I was going to be designing more things, but it ended up just being given a template and saying put photos on a page, put text on a page. If you didn’t get everything done, it had a huge impact on your grade and affected everyone else in the class, and I didn’t like having that much pressure on me.”

Cranmer said if yearbook were to count as a visual and performing arts class, more students would consider signing up for it.

“I think it would be great if it counted for VAPA,” Cranmer said. “Instead of students taking photography or guitar or other art classes, they could take yearbook and it would count toward requirements.”

Cranmer is working hard to ensure a high-quality yearbook is completed, even with so few staff members. This would be even harder to achieve if it weren’t for the great deal of assistance the yearbook staff has received.

“The Gazette staff has written some stories for us,” Cranmer said. “Journalism 1 is doing some interviewing for us. We’ve got alumni and parents giving us photos. I’m shooting photos and we even have students who were on staff last year that are coming back in and helping us put the pages together.”