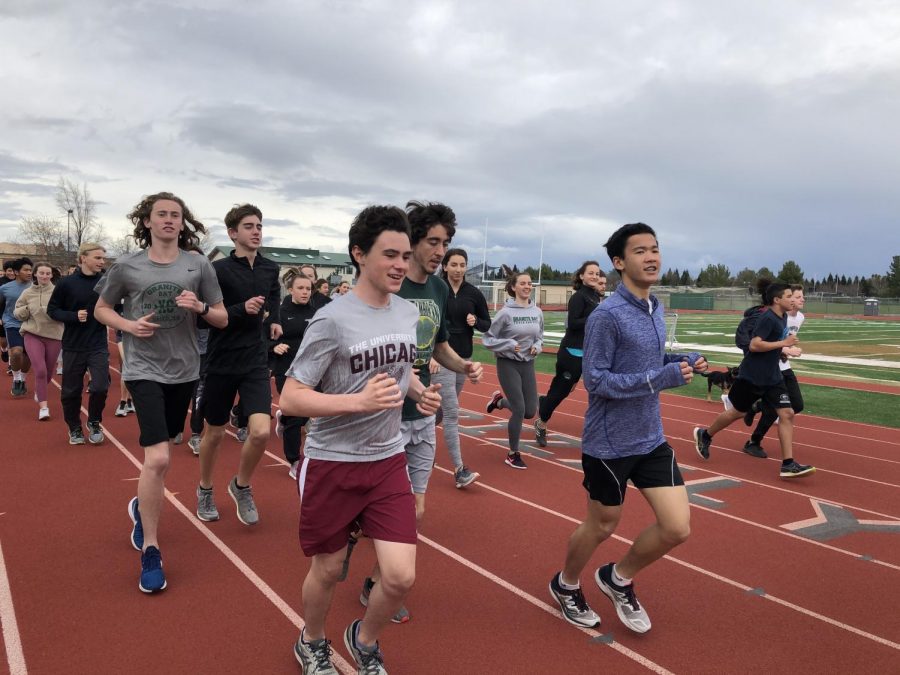 The track and field team runs warm-up laps for an after-school practice session.

Track and field drop off

As Granite Bay High School athletics carry on into the spring season, participation gradually decreases, particularly within the track and field season. Several juniors and seniors who have ran track for the past two or three years have decided not to continue with the sport this year, much to the dismay of the coaches and teammates who are by their side throughout the season.

While track participation is decreasing, many athletes who are on the team continue to express their affection for the sport.

Junior Eva Shaw is an athlete who has done track as well as cross country all three years of her high school.

“(I) Started track because it optimizes my energy levels so I can ultimately focus better on my academics and also helps me to make better connections with the friends and people I already know,” Shaw said.

Shaw believes track is advantageous for many reasons.

It’s really positive, everyone wants to help each other out, and everybody wants each other reach success,”

“It gives me experiences and new opportunities that are only beneficial.” Shaw said. “I also think the pain and the team work ethic working together is also really good for the long term.”

While some may view the sport as too physically challenging to be enjoyable, Shaw and other athletes have said that the experiences gained from participating in track are very beneficial.

Sophomore Alex Miller, who is  currently a distance runner on the track team, has also expressed her satisfaction with the track program and its environment.

“It’s really positive, everyone wants to help each other out, and everybody wants each other reach success,” said Miller. “It’s definitely more of a family atmosphere, because even though it’s an individual sport, there’s a lot of caring about your teammates and wanting them to do well, as opposed to wanting to beat them.”

Despite several athletes in track who have expressed their happiness with the program, there has still been a decrease in participation.

While reasons could vary from person to person, some have theorized that different priorities have been the cause for the loss of athletes. Some students believe it becomes more difficult to play a school sport in high school.

I wanted to work a little bit and get a job resume going. Also I’m taking online classes right now, and track was just one of those things that had to go.”

“I think part of it is because as you progress through high school you’re getting less and less time to do things, so people are prioritizing school work over sports,” Miller said. “I have noticed that a lot of upperclassmen drop out, but hopefully freshmen will get interested in it again next year.”

Tristan Paperno, a senior on the track team, has also noticed decrease in athletes.

“There has been a decrease in participation in track.” Paperno said.  “Some of the reasons I’ve seen are people wanting to focus more on academics.”

The academic rigor and extracurricular activities of junior and senior year may be why many athletes quit the sport.

“Lots of senior and juniors opt out of track, either because they get employed or they get too involved with their academics,” Shaw said.

The expectations are generally higher academically for students during their junior and senior year. Many juniors and seniors decide to take one or more Advanced Placement classes, which can significantly increase a student’s workload.

In addition to AP classes, volunteering, clubs, college preparation, and a variety of other tasks that fill up a senior or junior year, playing a sport can become a little bit too much to handle.

If a sport is hurting your grades then maybe take a step back, but if they aren’t and you’re having fun, do sports,”

Senior Cate Snedecor, who ran track previously, made the decision to leave the team this year.

“I decided to not do track this season because over the years I found a greater passion for long distance running, and I wasn’t as excited about track,” Snedecor said. “Also I have four APs this semester so I was a little overwhelmed doing track with school right now.”

While athletes such as Snedecor who discontinue a sport often do so for multiple reasons, academics seem to be the leading factor among these athletes.

Even if the sport is a fun and an important aspect of the athlete’s life, a student’s grades and academics are often what come first.

“If a sport is hurting your grades then maybe take a step back, but if they aren’t and you’re having fun, do sports,” said Snedecor.

Even a captain of the track team may have to reassess their priorities when considering what workload they can handle.

Nick Beck, a senior who was a captain of the track team last year, has quit the sport this year.

Beck enjoyed challenging himself to improve during the track season.

“I did it because I was naturally good at running, and I knew that I could get better if I just worked on it, and I heard that the coaches were really good,” Beck said.

Though track had been a large part of his high school experience, Beck had certain motivations to leave the team.

“I wanted to work a little bit and get a job resume going,” Beck said. “Also I’m taking online classes right now, and track was just one of those things that had to go.”

No matter the reason, school and other school-related activities often, if not always, come before sports, and track is no exception.