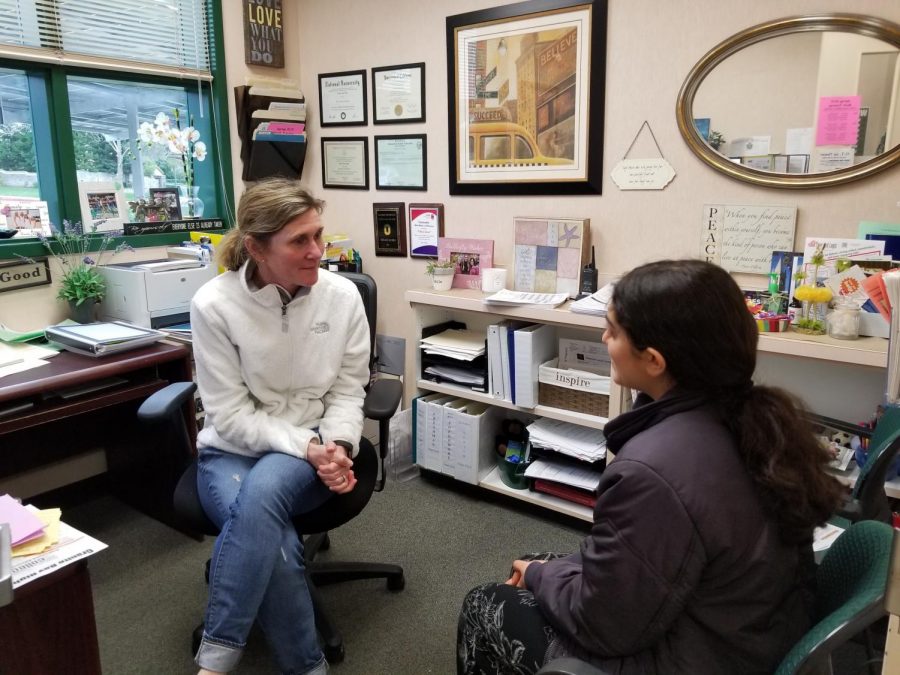 Counselors give insight on future classes to students to help them pick out their courses for the 2019-2020 school year.

“We shifted our sequence of registration dates this year,” counselor Tiffani Gieck said. “We are concluding our eighth-grade enrollment night prior to our in-house registration process. Our school is still allocating the same amount of time, it is just rearranged.”

One of them is for “internal registration” – another way of saying class registration for current and returning GBHS students – and the other is for “incoming freshmen,” McGregor said.

“(These processes) interact with each other,” McGregor said. “That ties into staffing and hiring and all the schedule building. … So it all is really interwoven.”

McGregor said the timing is the same for the administrators, it just feels different for the students.

We’ll reevaluate it in the end and then shift to thinking about doing it next year,”

Current GBHS students had mixed reactions to the later starting date for 2019-20 registration.

“I feel like with a more delayed class scheduling date, it gives  students more time to actually think about what classes they want to take rather than having us rush to choose what we want to do,” junior Esther Foksha said.

However, despite the extra time, this later date might give students to think of next year’s classes, they might be even more stressed than they would be without the extra thinking time.

“It gives us more time to think about our actions, but at the same time, it kind of brings us to have to do more at the same time because February is usually so crowded with a bunch of activities, like extracurriculars and other classes as well,” Foksha said. “And midterms are coming up, so everybody is just really stressed. For (juniors), the SATs are happening as well.”

Other students didn’t even realize the window was two weeks later.

“I reckon a lot of people probably didn’t notice or realize,” McGregor said. “That’s kind of my sense, that they don’t remember last year‘s (class-selection window.)”

But she thinks the delay in the process this year will help in “preparing students more in deciding what class to take,” because last year she was stressed on what classes to take because she did not know her future plans.

it kind of brings us to have to do more at the same time because February is usually so crowded with a bunch of activities, like extracurriculars and other classes as well,”

Reburiano also said she needs the help of a counselor to decide what classes to take.

“I think there should be more guidance and more information about the class and teacher,” Reburiano said. “Some students don’t know how much (the) workload (is) or how hard the class can be until they take it.”

One way GBHS counselors can provide guidance for course selection is through registration advising meetings.

“Counselors do a transcript review of every student prior to our 1:1 Registration Advising meeting, so we are prepared when meeting with a student and solidifying their course selections,” Gieck said.

There is also an updated course catalog that is available on the GBHS website.

“We encourage students/families to review the course catalog where there is a wealth of information on course planning, including course descriptions,” Gieck said.

Ultimately, the goal of switching up the timing is, simply, to improve the course selection process.

“We are always looking to optimize the process, and so sometimes we have an idea that we think might help everything go smoother,” McGregor said. “This is one of those times.”

So will this year’s pattern of incoming freshmen registering first, and current students second, continue next year?

“We’ll reevaluate it in the end and then shift to thinking about doing it next year,” McGregor said. “Just doing the things the same way they’ve been done is not usually a good way to go.”