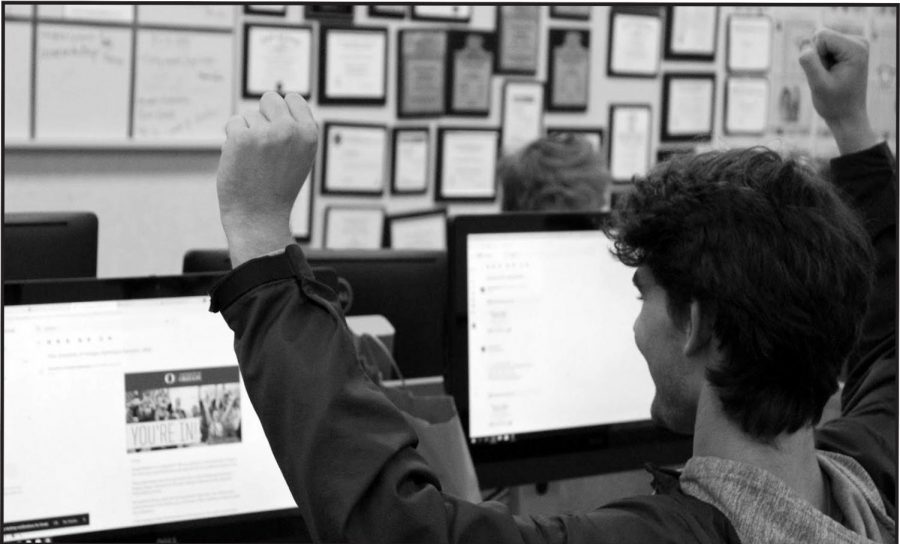 Seniors celebrate when they get their college acceptance letters, but this year they’ve been celebrating alone during the coronavirus lockdown.

Every year, Granite Bay High seniors rush to complete early college applications by Nov. 1, hoping to be admitted to their top university.

This group of ambitious students are certain where they want to attend college because “early decision” applications are binding. However “early action” is not and might be a better option for those who are uncertain what their dream school might be but still want to find out if they can get in early.

With about 450 colleges in the United States that offer early applications, the application decision process is expedited.

Deadlines for many early applications fall on Nov. 1, and students can hear back about their application decision as early as December and as late as January.

Getting the jump on the college application can pay dividends, and these group of students are a prime example. In some cases your chances of being admitted to the school can be increased. So students shouldn’t sleep on their dream school – applying early can put the odds in their favor.

“I applied to Boise State, University of Arizona, University of Colorado (at) Boulder and Washington State,” said Thompson, who was accepted to early early-application school and whose top choice is Boise State. “My family, who I’m really close with, lives there,  and I go there a lot, so I’m familiar with the area.”

My family, who I’m really close with, lives there,  and I go there a lot, so I’m familiar with the area”

Being close to relatives when students go away for school can be a deciding factor in where a student chooses. Cat Lauth applied to the University of Washington, University of Texas-Austin and Baylor University.

“I got into Baylor a few weeks ago, which has been my top school … but the other schools won’t get back to me for a bit,” Lauth said.

Baylor was her top pick for reasons similar to Thompson’s reasons for picking Boise.

“I was born in Texas and have family there,” Lauth said, “so it would be really nice to live by some relatives, but I also took a tour between sophomore and junior year and fell in love with it.”

“BYU has a bunch of people with the same values as me, and my parents and grandparents went there,” Wade said.

It’s been a goal of  Wade’s to attend BYU to carry on the family legacy.

“I applied over summer and found out at the end of August,” Wade said, “and I’ll be going for the winter semester starting Jan.7.”