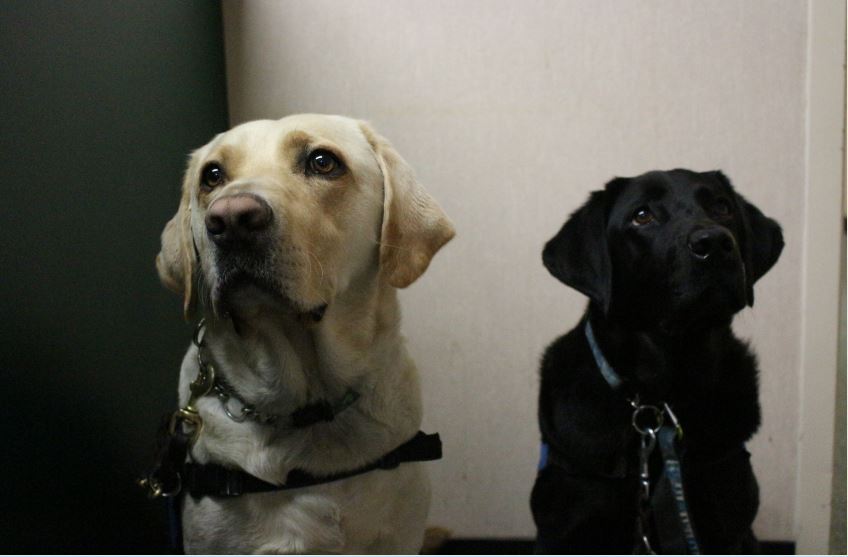 Shamrock and Rielta, GB’s service dogs, focus on their owners’ healths while waiting for instructions.

When most people think of medical equipment, they think of crutches, wheelchairs, oxygen tanks, stethoscopes, thermometers, etc. Their first thought is not typically a service dog.

Currently, on the Granite Bay High School’s campus, there are two service dogs – Rielta, who aids junior Madelaine Ghufran, and Shamrock, who aids staff member Aimee Betgeorge. Ghufran and Betgeorge are type-one diabetics and are alerted by their service dogs if and when their blood sugar begins to drop or rise. Service dogs are relied on for guidance for the blind or to alert an oncoming seizure as well. Therefore, a distracted service dog puts its owner at risk of getting hurt if they miss a signal.

“People tend to disrespect me and my service dog almost every day. Some of the most common things people do that interfere with [Rielta’s] job are petting her without asking, calling her name or trying to give her commands,” Ghufran said. “It just distracts her so if I don’t know if somebody is petting her, I don’t know if she’s paying attention to me, and she might not alert me.”

This puts Ghufran at risk if her blood sugar changes significantly in those few distracted moments. Therefore, she wouldn’t know to properly control it.

“It’s really frustrating because a lot of people know that you’re supposed to ask before you pet a service dog, but a lot of people don’t think it’s that important to follow the rules,” Ghufran said.

Having to worry about this sort of situation can be burdensome and stressful for people with service dogs.

People tend to disrespect me and my service dog almost every day.”

“We’ll be out in public and people will touch him or they’ll let their kids come over and play with him and that actually happens quite a bit so I’ll just have to explain,” Betgeorge said. “A lot of times, it’s kids who understand more than their parents.”

On top of this attitude towards service dogs, a shocking influx of “fake” service dogs is currently a disturbing trend. Fakers purchase a service dog vest to put on their pet so they can bring them with them while they run their errands or travel. By passing their pet off as a service dog, they are granted access with their pet to certain places such as stores and restaurants which they aren’t supposed to be.

It really just takes away from the legitimacy of service dogs.”

“People have tried to deny me entry but I have to then tell them that it’s a legal service dog and it is illegal for them to not let me into their establishment. So people have definitely tried, but I’ve always been able to get in. It’s not common. It’s every now and then but when it happens, it is really frustrating,” Ghufran added.

Participants who train to have a service dog are taught how to work and deal with these scenarios by learning all the rights of having a service dog.

“It would be so nice if people understood when they go to pet him or when they go to do things it definitely distracts them… I mean that really is life-threatening.” Betgeorge said.