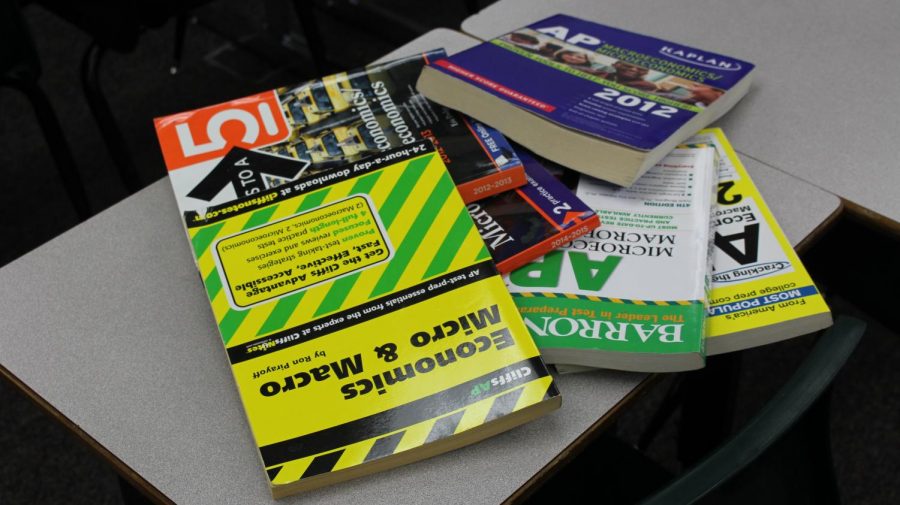 AP classes are popular at GBHS, some of them having classes with body counts of upwards of 30 students.

Students struggling to get a desired grade in AP or IB courses have long been able to find solace in the promise of a higher grade if they received a high-enough score on their eventual test.

However, Granite Bay High administrators are considering putting an end to this teacher-implemented policy starting next year.

In the mathematics department, AP Calculus and IB Mathematics teacher Scott Becker gives out grade changes based on the grade students have in the class and the score they receive on the test.

When students receive their grade on the College Board or IBO portal, they can then submit a grade change request to Becker.

However, under the new grade change policy, this would no longer be possible.

In Becker’s case, regardless of the grade received on an AP Calculus or IB Mathematics exam, a student’s  corresponding quarter grade can’t be changed.

Becker said he disagrees with the new proposal.

“For our AP and IB tests, one of the main focuses in the course is to prepare students for that exam,” Becker said. “That’s sort of the culminating demonstration of what they’ve learned. If a kid is struggling at the beginning of the class, but they’re able to then demonstrate at the end that they’ve learned all the things that they’re supposed to learn, I don’t personally have a problem going back and giving them a bump on one of those grades.”

The grade changes are definitely useful because they motivated me to get a 4 instead of a 3 or a 5 instead of a 4 on an AP test, which is essential for teaching strong work ethic and helped me learn,”

While Becker is not in favor of the policy change, AP European History teacher Michael Valentine feels differently. He said the new proposal will encourage equity between different teachers instructing the same subject.

For example, if a teacher refuses to change a grade based on a particular score on an AP or IB test, Valentine said the student might ask, “Yeah, but that teacher does it and you don’t. Why don’t you round up?”

“I don’t (change grades), but they do it, you know? But that’s them,” Valentine said. “You see, it gets rid of (differences in grading.)”

One of the reasons Valentine doesn’t award grade changes is the large pass rate of his class and the immense amount of work it would entail.

“Last year, I had a 70 percent pass rate,” Valentine said. “Imagine trying to fix those 70 percent of my students grades. How (will) that work?”

It isn’t the only problem he faces, however. Valentine said he would have to round up grades on a case-by-case basis.

“Okay, so you got a 3, and you had an 85 percent,” Valentine said. “But a 3 is like, a C, right? So does that mean you get to round up? What’s the difference between that and someone who got a 5? Does that mean a whole grade? That’s just a can of worms I don’t want to open up. (It would mean) I’m never done (with grades).”

Makaela Levine, a senior, is in favor of grade changes from AP/IB tests.

“The grade changes are definitely useful because they motivated me to get a 4 instead of a 3 or a 5 instead of a 4 on an AP test, which is essential for teaching strong work ethic and helped me learn,” Levine said. “It incentivized such a stressful time for me.”

Levine is against the new grade-change ban, even as a graduating senior. She also agrees with Becker that the point of an AP/IB class is to prepare students for the respective test.

“This is the first I’m hearing of this, and it’s big dumb,” Levine said. “If you don’t do well in the short-term, but you clearly indicate in the long-term that you know your stuff and know what you’re doing on an incredibly difficult test, then your grade should reflect that.”

On the other hand, Faraaz Godil, a junior, can understand the administration’s rationale.

“I can somewhat see how this decision is justified, as (an) AP score doesn’t reflect class performance always,” Godil said. “They are two separate numbers that indicate two separate things”

That being said, however, he said  there is no need for students to be unable to benefit from grade changes.

“Personally, I think that if you excelled on the test, your grade in the class should be changed,” Godil said. “However, this should also be based upon the teacher’s discretion on your work ethic.

“If you were slacking in the class just to get a good score on the AP test, that decision should be up to the teacher.”