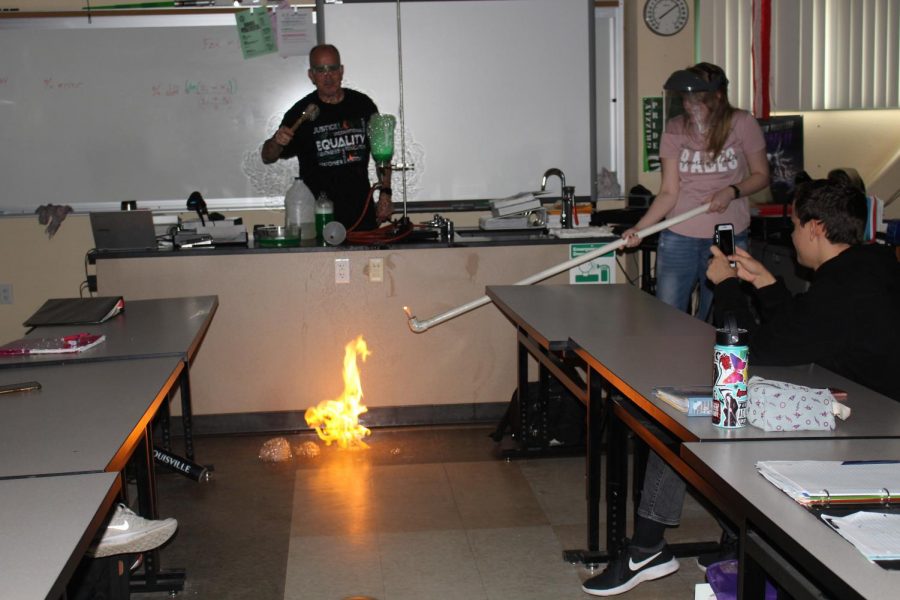 Junior Ivy Fralix launches a ball of flame during a lab in Stephen Miller’s fourth period CP Physics class, students must be prepared for activities like this in NGSS Physics.

The typical order for Granite Bay High students to take their science courses would be biology, then chemistry and then physics.

Next year, GBHS students will be taking physics before chemistry. NGSS Physics is replacing chemistry for the required sophomore science class.

“Taking physics is going to be a requirement, so (a student) could either take NGSS Physics or AP (physics) I,” current AP Physics C and NGSS Biology teacher Andrew Phillips said.

Current sophomores who have yet to take physics appear to like the new course placement.

“I think physics is really useful in life because almost every other class (I’ve had) references it,” sophomore Ashley Gleason said. “I think it’s a much better use of (the incoming sophomores’) time.”

Teachers are also excited for this new course.

“I love teaching physics because it’s  a very interactive subject, and I think that the course that is being designed is going to reflect that,” Phillips said.

A major part of this updated physics course is the different teaching method.

The new class will be more project-based and “intended to be more like constructing opportunities for students to learn through interacting with science through analyzing data,” Phillips said. 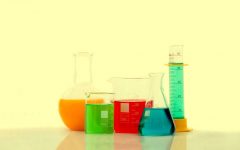 This difference aligns with a changing job market that demands more creative problem solving and less simple following of directions.

“Career fields now are now more progressive,” Phillips said. “You don’t know the answer when you start – your job is to figure out the answer.”

This new style of teaching is intended to help students execute skills that are necessary in science and other areas of life, rather than instilling only niche information in the minds of students.

“ ‘The mitochondria is the powerhouse of the cell’ is of very little use to anybody except meme creators or career biologists,” Phillips said.

CP Physics and AP Physics C teacher Steve Miller said the curriculum of the class will also be altered.

“We’re still doing what we can to cover the major areas of physics,” Miller said. “What’s going to be different about it is the fact that we’re integrating some earth science components in it.”

According to Miller, earth science principles will be integrated in NGSS Physics, NGSS Biology and eventually NGSS Chemistry in a “district-wide initiative.”

“Earth science is really valuable and important,” Phillips said. “It often gets overlooks as sort of an intro class for people who aren’t really ready for bio. That’s not really fair to students and not necessarily fair to earth science as a field.”

In the long-run, earth science is intended to be seamlessly incorporated into each stage of a student’s high school science education.

“The idea is that we incorporate earth sciences into all of our other classes where applicable,” Phillips said. “We’ll link solar, earth and space sciences with motion and gravitational forces in physics.”

We’re still doing what we can to cover the major areas of physics. What’s going to be different about it is the fact that we’re integrating some earth science components in it.”

However, both Phillips and Miller mentioned that the semantics of the course are not set in stone.

“There’s a few more projects that we’re doing and we’re trying to coordinate things across the district.” Miller said.

Class sizes are also expected to be larger, as this class will also be available for students in other grade levels to take.

Also, because of the pending retirement of biology and physiology teacher Chet Dickson, the school will be gaining a new staff member.

Though as with any new class, there is also concern.

“The math is one of the things that people are most concerned about for having sophomores take physics,” Phillips said.

He isn’t concerned about the math component, however, and said that he’s seen sophomores be successful in physics classes.

In addition, the new NGSS Physics class will be less mathematically rigorous than the previously offered CP Physics course.