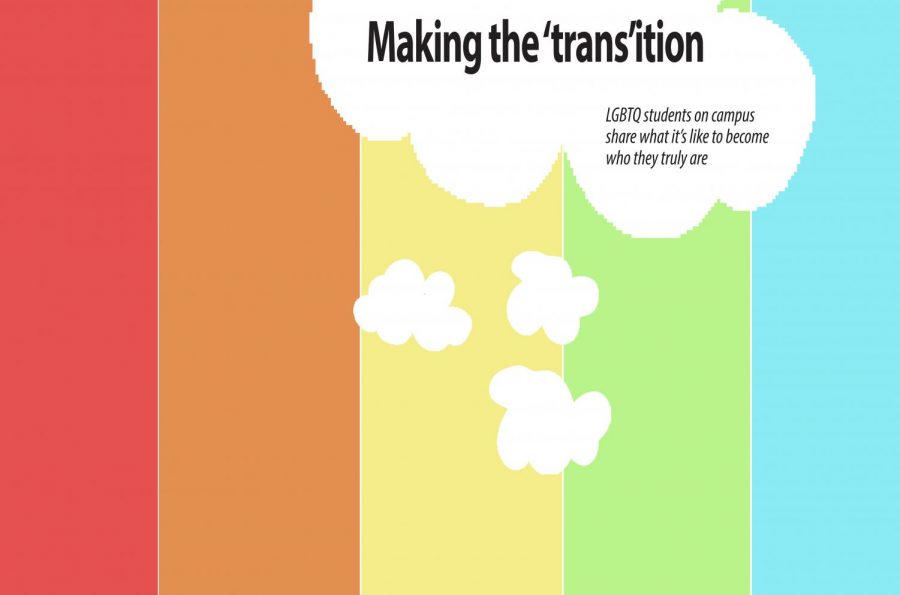 Students of the LGBTQ community share their experiences and struggles with gaining acceptance in society.

Over the course of the twentieth century, traditionally underrepresented and marginalized groups have come out as victors in the battle for a place at the societal dinner table. Unfortunately, while their limelight is undoubtedly deserved, prejudice shines just as bright.

An example of such which lamentably hits close to home is with Granite Bay High School’s transgender student body. In a video which aired originally on GBTV, teachers read first-hand experiences of transphobia and threats of physical harm as reported anonymously by LGBTQ+ students.

“Most of it was through social media, although there was some (harassment) face to face,” said a former Granite Bay High junior girl. She openly transitioned in the middle of her freshman fall semester, allowing those who had known her before to follow along in her progress.

The proper usage of preferred pronouns can go a long way in feeling accepted as a trans student, and those who harassed her used this to their advantage. “(People were) using the wrong pronouns purposefully, giving rude and negative comments,” she said. “The glares people gave me really hurt the most, but I was able to excuse the misuse of pronouns if they weren’t really aware or didn’t understand.”

Unfortunately, those who harassed her aren’t alone in their efforts to target transgender students on campus. Jayde Barnett, a current senior, says they’ve experienced similar persecution, challenging their gender fluidity.

“I ignored it because I know their bullying came from an unwillingness to learn, so it was easy to brush off,” they said. “You don’t have to have dysphoria to transition. (…) You can be the person you want to be without having your validity questioned.”

I ignored it because I know their bullying came from an unwillingness to learn, so it was easy to brush off”

Fortunately, Granite Bay is equipped with tools aimed at aiding LGBTQ+ students, some of which being the Gender and Sexuality Alliance (GSA) and the Wellness center. Both offer support for those who may not be receiving necessary support from friends and family.

“My family still doesn’t vibe with it. It’s been two years and my mom is finally realizing I’m not going to change,” says Nate Stebbins, a sophomore boy who transitioned at the end of eighth grade. Despite their negativity, he knows that he made the right decision.

“Transitioning was essential for my well being. If I didn’t make the changes I did, I probably would’ve hurt myself in complete self pity and hatred,” said Nate. “I’m literally just a male. I don’t know why people get so pressed about it.”

While disheartening, this harassment is not the end of the story. Many classrooms are now adorned with safe space stickers for those worried about being targeted, and GSA works to make strides in acceptance of LGBTQ+ students on campus.

“Other people’s opinions of your individual identity don’t mean anything. You will eventually find people who accept you.”