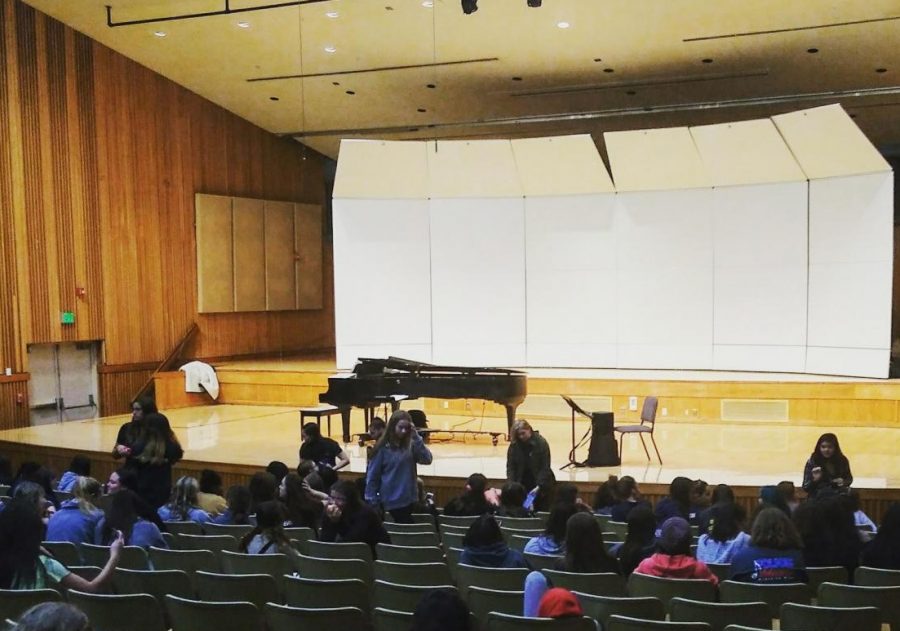 In the theater, the students were split into their sections, anticipating the day of music to come.

The day began like any other day of school. However, two factors made this day exceptionally pleasant.

Friday, the day of the week every student and staff desires, was the first factor. Going to a festival instead of school was the second factor.

The festival was, by far, the best part of Oct. 4.

Granite Bay High School choir teacher Susanna Peeples organized a field trip for the girls in her choir class to Sacramento State University (Sac State).  The boys in the choir had gone to their own festival last Friday.

After an extensive and monotonous bus ride, with the only excitement being a happy birthday song from the bus driver sang, the choir arrived at Sac State.

The auditorium was divided into four sections; Alto two, alto one, soprano two, and soprano one.

After everyone was seated correctly, the choir director, Donald Kendrick, gave a brief speech.

Then, Kendrick led the students through a series of exercises to warm up their voices.

Now that they are ready to sing, the college choir performed two songs for the audience. They sang with such elegance, and the songs were spectacular.

Next, it was time for the students to sing.

The first song, “Truth”, told the audience to be strong, be themselves, and to believe in themselves.

The second song, Solace, was magnificent and serene..

Everyone worked hard, paid attention, gave their best effort, and had a wonderful time.

As the finale of the festival, two college singers each sang two last solo pieces: a sad lullaby and a joyful love song.

The lullaby was about a grandmother caring for a sick baby, and the love song was about a woman confessing her love to her special someone.

In what seemed like no time, the festival was over and the students were off to lunch.

Lunch was over in a blink of an eye.

Then, it was time to head back to the school bus and the Granite Bay Choir said goodbye to an incredible and unforgettable day.