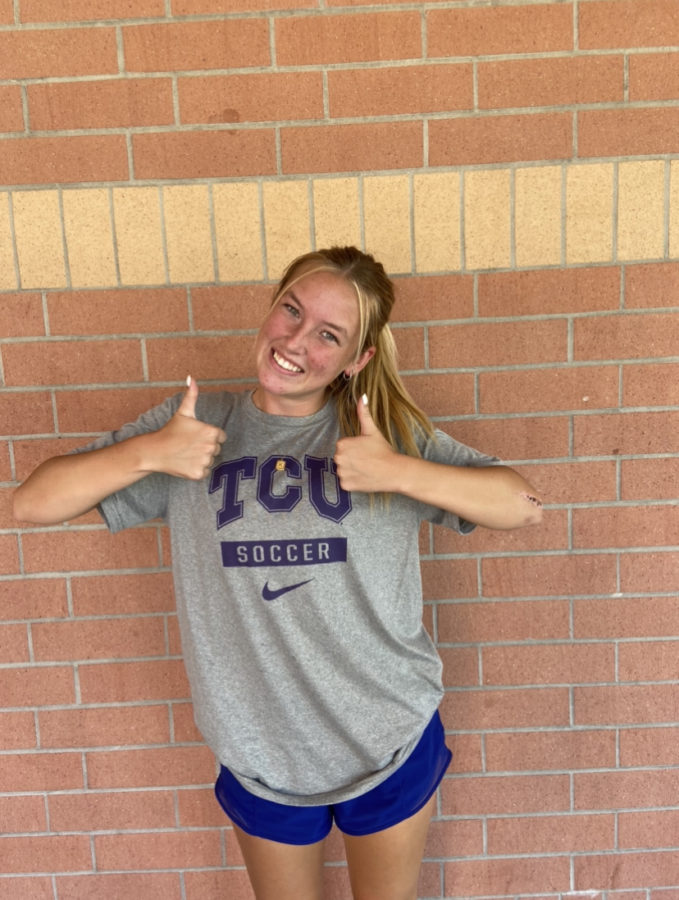 What inspired you to be a Grizz Nation Leader?

“The Grizz Nation Leader my freshman year was Summer Holt and I remember as a freshman looking up to her. It was the biggest dream of mine in the back of my head to be like ‘Oh my gosh what if one day I could be like her and lead the student section’. I looked up to her so much and I did not think it was realistic at all … people I know who don’t like sports still come to games because they want to be a part of the Granite Bay community and the Student Section. I realized it was so much bigger than football, so that’s … what really piqued my interest.”

Have you ever had an experience where you have felt extremely supported playing soccer and if so, can you tell me a story?

“So last year, I had been on this soccer team for 7 years … and it’s all 2004 girls and I always since fifth grade was the girl who was the grade younger … even though I had technically one more year of … soccer left it was going to be my last year with them. I was really looking forward to this season because it’s our last year together and then I got a concussion. I collided with a girl … and slammed my head back and blacked out … and then I was out for two and a half weeks and my first game back I tore a tendon in my ankle. So it was just back to back … I missed four months of club so I only had two months. At the very end of the season I got to enjoy my last season with my teammates, but that whole time I was injured I still showed up at every single one of the games and I realized that … I don’t even have to be playing to feel supported by my teammates they were always so supportive … I’d get disappointed and down on myself because I wasn’t able to play but the way that they were able to pick me up and the positive ‘you’re doing so good’ … I found myself looking at the glass half empty a little bit because not a lot of stuff was going right at the time but my teammates really helping me … they taught me to be that person for other people too.”

Does feeling supported drive you to be a part of Grizz Nation and support our teams?

“I think that as an athlete … you’re training almost every day of the week, you’re putting in hard work at practices and games, and it’s really rewarding having all these people come out and support you … I know it’s such a fulfilling feeling having people show up who care about you and who support you, no matter wins or losses.”

Why do you think it’s important to have a support system like Grizz Nation at a high school?

“I think that all these athletes are playing for themselves , they wouldn’t be playing the sport if they genuinely didn’t want to … It’s probably not the most fun thing in the world to go to practice … but all of them putting in this hard work and then the

y get to play a game and whether they win or they lose, whatever happens just knowing that they have their classmates behind them … When they make good plays [for] us to cheer them on and recognize all the hard work they’ve been putting in … [we] endlessly support them and let them know that we’re proud of them.”

What does being a Grizz Nation leader mean to you?

“I can’t even describe what an honor it is to be able to lead the student section … it’s such a fulfilling feeling being able to hopefully encourage people to come out and support our athletes.”