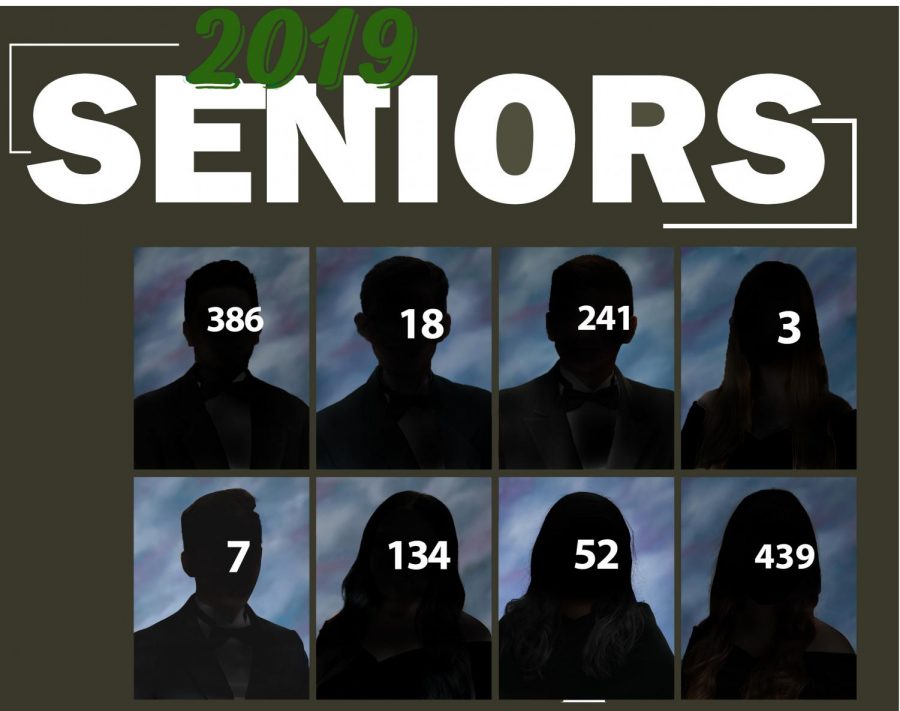 Students at Granite Bay can be viewed as basing their images off of their class rank, leaving some to feel overlooked because of their their lower rank.

The rivalry and resentment on display as a handful of overachievers battle it out over tiny differences in GPA has led school administrators to join the conversation of eliminating class ranking in favor of identifying a small group of high-scoring students as co-valedictorians and salutatorians.

“When I first started four years ago, we started talking to other principals about really (needing) to get class rank off the transcripts,” said Granite Bay High School principal Jennifer Leighton.

The Roseville Joint Union High School District is of the most competitive districts in the state, and GBHS is the most academically high-achieving school in the district. According to the 2018 School Accountability Report Card, 26 percent of the senior class had above a 4.0 grade-point average – but this high achieving atmosphere does not come without a culture some describe as cutthroat.

“Class rank has intensified an already competitive student academic environment,” said honors English 10 teacher Anthony Davis. “Kids get so competitive about being No. 1 or in the top 10 that they care more about their rank and the competitive aspect that ‘I have to beat the kid sitting next to me’ that they pay less attention to what they are actually learning.”

“For the class of 2020, it has caused a lot of problems,” said senior Aditya Mishra. “It is hypercompetitive, a lot of the kids are constantly stressed.”

The competitive climate has often influenced students to cut corners around what it means to be a high-achieving student and the accompanying values.

“I think it is a big problem here,” Leighton said. “I think we see (cheating) a lot in our higher-level, AP kids.”

Not only does the culture pressure students to cut corners, but it can be demoralizing for students who are far above the national average on things like their SAT scores but remain buried by a lower class ranking.

It can be a disadvantage to students to have numerical class rank when you are higher achieving compared to those you might be competing against across the nation,”

“It can be a disadvantage to students to have numerical class rank when you are higher achieving compared to those you might be competing against across the nation,” superintendent Denise Herrmann said.

Site administrators have seen that class rank has had a direct effect on students’ attitudes toward learning.

“I think sometimes we have kids that care more about class rank than actual learning, and it pulls away from the actual purpose of why we are here,” assistant principal Jessup McGregor said. “As an administrator, I am here to ensure safety, (education) and happiness in these students to the best of my abilities – some students sacrifice safety and happiness to have a higher class rank.”

GBHS administrators and Herrmann are on board to begin the process of eliminating the traditional numerical class rank system.

“I’ve seen it successfully implemented at so many other school districts,” Herrmann said. “The schools who got out ahead of this effort and went away from class rank were not harmed at all and in actuality enhanced their (college) acceptance rates, and they were creating a less competitive environment.”

The schools who got out ahead of this effort and went away from class rank were not harmed at all and in actuality enhanced their (college) acceptance rates, and they were creating a less competitive environment”

Still, some critics of ditching the class-rank system argue that competition is inevitable in the workplace, and so it shouldn’t disappear in schools.

Herrmann says that criticism is misplaced.

“One of the No. 1 things businesses and workplaces say they want are students who can collaborate and have teamwork skills,” Herrmann said. “Then we put students in a position where we want them to collaborate but they are competing with each other … and that is counterproductive for what we are saying the students should be focusing on.”

The hope for implementing this model would be to eliminate the number identification of students while still recognizing their academic achievement.

Those opposed to eliminating the class-ranking system sometimes cite the fact that college applications appear to require students to list their class ranking. But because not all schools do a class ranking, that’s something that can generally be overlooked by college admissions officers.

College (representatives) are not considering class rank as a priority in their decision making,”

“College (representatives) are not considering class rank as a priority in their decision making,” said Teri Keeney, the GBHS college counselor. “You could be ranked 150th here but ranked fifth at a different school.”

Class rank is generally not an accurate indicator of a student’s talent as there is a vast discrepancy in the quality and depth of curriculum between high schools across the country.

“Is a 4.5 GPA the same as a 4.5 from Bear River High? No,” McGregor said. “Colleges understand the schools kids are coming from and have their own weighting system.”

Also, if there were cases where colleges, scholarships or jobs did require a numerical class rank, there would still be a private record.

“We would take it off the transcript but still have the ability to give the rank to a student if (students) needed it,” Leighton said.

Eliminating class rank wouldn’t just mean taking a number off a transcript, it would also require a change in the valedictorian process – which administrators evidently have already been looking to reform.

During the 2018 graduation ceremony, co-valedictorian Ryan McAvoy took to the podium, replaced his graduation cap with a water polo cap and proceeded to deliver an unapproved “roast” about many other students in front of an audience of thousands of parents and grandparents.

“After last year I was done,” Leighton said.

We are going to value diversity of voices,”

The replacement model would likely feature no valedictorian or salutatorian speakers at all. Instead, speakers would audition and be selected by a panel of teachers and administrators.

“We are going to value diversity of voices, we’re not going to have people automatically speak –  the door will be open for many different voices,” Herrmann said. “It leads to a much more authentic graduation … you (are) addressing your classmates because you had good ideas and you could articulate yourself well, not that you (are) entitled because you happen to be the person who got high grades.”

Mishra, who is currently in the class of 2019’s top 5 rankings and is a possible candidate for valedictorian, is not opposed to the idea of changing the class ranking system and the valedictorian/salutatorian selection process.

“I think we should get rid of the (valedictorian honor) 100 percent,” Mishra said. “Even if someone is at the very bottom of a class and you’re at the very top, it doesn’t matter – you guys have all been alive for the same amount of time.”

The school would potentially still give high honors to a group of students at the senior awards ceremony, but it would not be based solely on GPAs.

“At senior awards we do recognize standouts in certain areas, that would be an opportunity to show who is showing leadership in the area of STEM or who are the most artistic students and thinking in clusters of awards where at graduation the school cultures are trying to get away from that being competitive as well,” Herrmann said.  “In a class of 400 you might have 15 kids recognized for having that more well-rounded stellar experience than just No. 1 and No. 2 speaking at graduation where grades are the only thing that we value.”

Although there has been support for these reforms, they won’t be in place for this school year.

Things move slowly so that lots of people can have input, because if one person is making decisions then a lot of things can go wrong quickly,”

“Things move slowly so that lots of people can have input, because if one person is making decisions then a lot of things can go wrong quickly,” McGregor said.

Also, it is unlikely that any one school will spearhead reforms before the rest of the district decides to move ahead.

“If we are going to do away with class rank, salutatorian and valedictorian, I would want to make sure that conversation is happening across the district,” Herrmann said.

Hermann said the process requires  input from students, parents, faculty and administrators all across the district.

“I want to have a student committee and some faculty get together this spring, and we could talk about what this could look like, not for this May’s graduation but setting the stage for this to be implemented in the following years,” Herrmann said.

If there is support from these groups across the district this spring, the district might see these reforms implemented as early as the fall of 2020.

“I want students at the end of the day to feel like they were heard, like they have input and that their thinking was represented in the final model,” Hermann said, “and that 10 years from now we can say yes, this added to a more positive culture and climate at our school.” 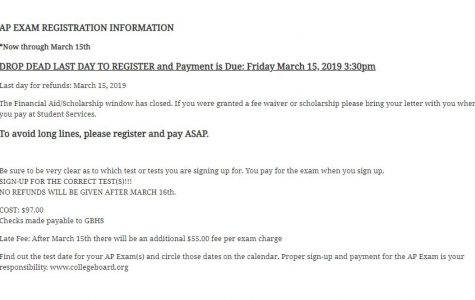 Registration dates change for AP and IB tests for ’19-20

Advanced Placement and International Baccalaureate exam registration usually consists of waiting in long lines for hours sometime during the spring term to turn in checks written for significant amount of money, payable to Granite Bay High.   Next year, the process changes when registration moves to the fall – and it remains to be seen what the effects will be.   “We are moving up the r... 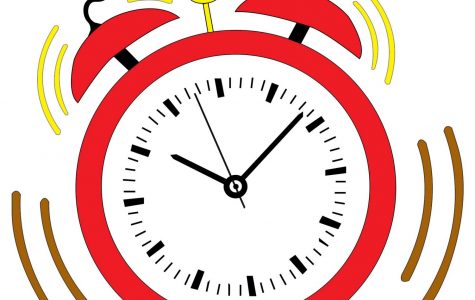 Collaboration days are one of the perks that tired students look forward to as a reprieve in the school week. The extra hour of sleep provides comfort and rest or the chance for students to wake up early and be productive.   There has been rumors regarding changing the schedule and moving the collaboration day to after school on Mondays instead of the hour before school on Wednesdays. ... 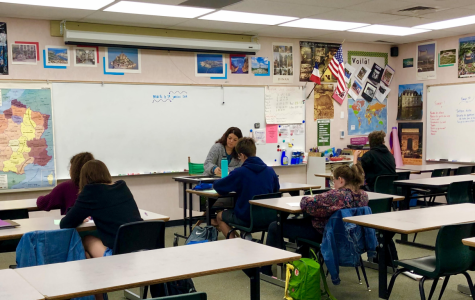 ‘Grizz Time’ could be on its way out

‘Grizz Time’ has been subject to debate since its relatively recent implementation at Granite Bay High School.   The 28-minute intervention period was put in place to give time for students to seek help from teachers and catch up on their studies. Since its inception at the start of the 2017-2018 school year, there has been a wide range of opinions regarding its purpose and effectiven... 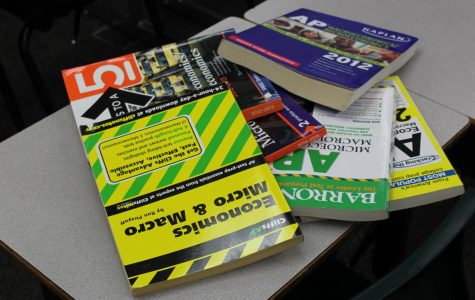 Students struggling to get a desired grade in AP or IB courses have long been able to find solace in the promise of a higher grade if they received a high-enough score on their eventual test.   However, Granite Bay High administrators are considering putting an end to this teacher-implemented policy starting next year.   In the mathematics department, AP Calculus and IB Mathematics teacher Scott Be... 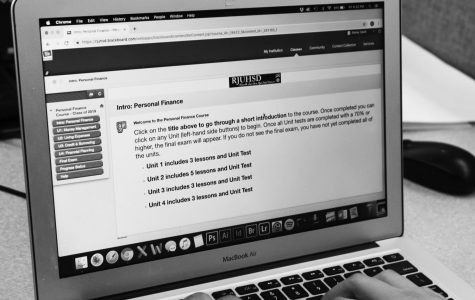 The infamous and entirely online personal finance course, required in order for all Roseville Joint Union High School District seniors to graduate, will soon be taken partially on campus.   Starting with the class of 2020, students must take the course’s final assessment on campus with the supervision of a GBHS staff proctor.    Several different assessment sessions will be offer... 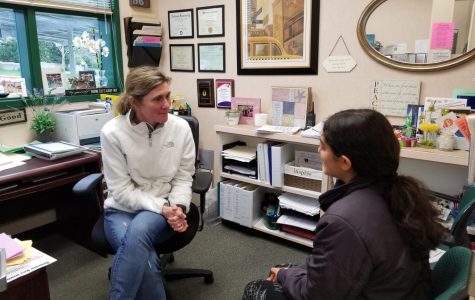 On Feb. 21, the class registration process for Granite Bay High students went live – two weeks later than last year.   “We shifted our sequence of registration dates this year,” counselor Tiffani Gieck said. “We are concluding our eighth-grade enrollment night prior to our in-house registration process. Our school is still allocating the same amount of time, it is just rearranged....