California state department of education official, several teachers from other schools cited poor conduct of GBHS students in their complaints 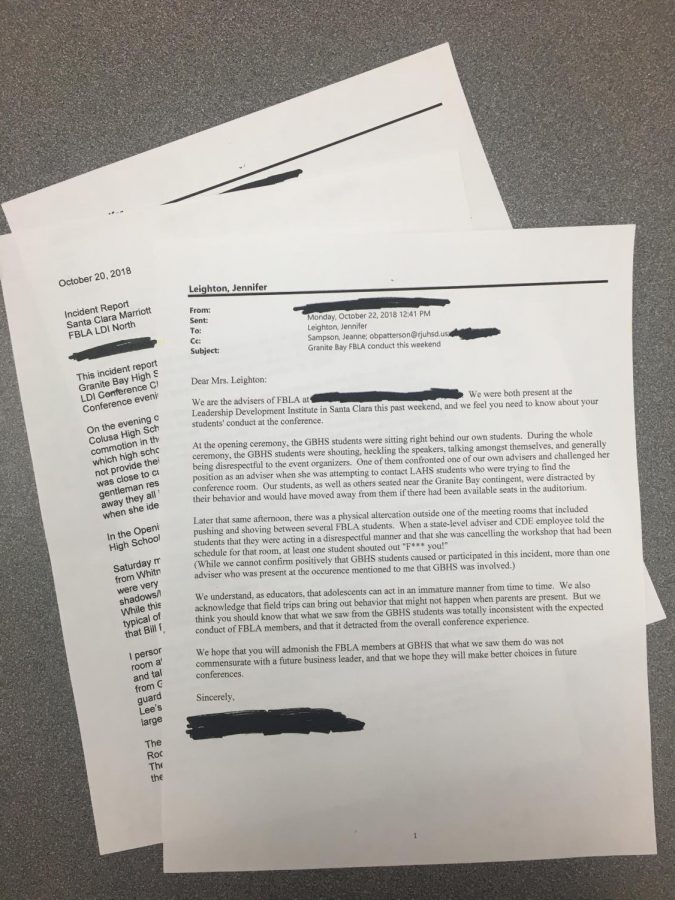 A California state department of education official collected evidence and statements about inappropriate conduct by Granite Bay High students at the state FBLA conference in October in Santa Clara. The information was then sent by the official to GBHS administration. Administrators also received an email from another FBLA teacher/adviser that complained about GBHS student behavior. You can read the documents by clicking the link located down and to the left on this page.

The events took place at the Marriott Hotel in Santa Clara during the weekend of Oct. 19-21.

On Sat., Oct. 20, principal Jennifer Leighton received an email from Molly Anderson, the state department of education program consultant for FBLA and DECA, another business club in many California high schools.

The email included a two-page report detailing the actions Granite Bay FBLA was accused of by several advisers from other schools.

In addition to those complaints, Leighton and the two GBHS club advisers, business teachers Bill Patterson and Jeanne Sampson, also received an email directly from another school’s adviser.

The Gazette obtained an edited copy of the email that did not include the name of the adviser or the school..

That adviser said the behavior of GBHS students during the opening session was unacceptable.

“GBHS students were shouting, heckling the speakers, talking amongst themselves and generally being disrespectful to the event organizers,” the adviser wrote.

The email from Anderson reported that multiple advisers from different high schools who attended the Leadership Development Institute complained about the conduct of GBHS club members.

“(During the opening session), Mike Messenger from Los Altos reported unruly behavior from (GBHS) students,” Anderson wrote in her email.

During a session titled “Stocking Up” led by Whitney High adviser Alyssa Gonzalez, Gonzalez said a GBHS boy was making shadow hand gestures while others laughed.

Gonzalez finished her statement by saying that “Bill Patterson must have his hands full with that bunch.”

However, what was possibly the worst part of the GBHS FBLA stay in Santa Clara, according to the advisers, happened in a hotel hallway before a session titled “Escape Room.”

“The group of students was waiting to get into a popular session … where they had learned that the session would be limited to 60 participants,” Anderson wrote. “There was a large group of students, approximately 120, that was completely blocking the hallway.”

It was at this point where GBHS students got noticed out of the large group.

“(GBHS students) had their cell phones out and were playing loud music and singing in an unruly fashion,” Anderson wrote. “(The music was being) played on their phones as well as a speaker held by a Granite Bay student over his head. The title of the song was ‘First Day Out’ by Tee Grizzley.”

The song features profanity-filled, misogynistic lyrics, including liberal use of the n-word.

Once the doors opened, chaos ensued.

“Students shoved their way in, pushing and shoving students, causing several to trip and one to completely fall,” Anderson said.

The session ended up being cancelled, and students were scolded about their behavior.

“I believe that the behavior of the GBHS FBLA chapter members present was unacceptable repeatedly during the course of the conference and, in large, incited the mob mentality that resulted in the Escape room being cancelled,” Anderson wrote.

Late Saturday afternoon, Patterson was informed the GBHS FBLA group was essentially banned from participating in the rest of the conference. Students ate a pizza dinner Saturday night in a hotel room, supervised by Patterson, and then left the next morning for Sacramento by train.

Sampson and Patterson both declined to comment about the incident because the students were subjected to school discipline, which is confidential.

A total of 17 GBHS students attended the convention, and 14 boys – 12 seniors and two juniors – were implicated in the disruptive behavior. None of the boys were suspended from school.
They had to participate in a restorative justice circle, led by assistant principal Brian McNulty, and were not allowed to attend the Homecoming football game or dance. Earlier this week, the participating senior FBLA members were put on senior conduct.

Because of the incident, the GBHS administration has suspended the FBLA club.

While admitting he and others acted poorly, senior Fernando Gonzalez said the portrayal of the group was blown out of proportion.

“I thought (the officials) over-exaggerated (the incident) and took (the blame and punishment) to a whole other level, and it was unnecessary,” Gonzalez said. “It seemed like it was their first time seeing teenagers have fun.

“I understand profanity isn’t OK and talking over others isn’t OK, but they were trying to say we started a riot and that they could have called the cops on us.”

Gonzalez noted there were factors that would have made the GBHS students stand out.

“Ninety percent of the kids there were predominantly of Asian and Indian descent and freshmen and sophomores,” Gonzalez said. “They all stood about 5-foot-5, and we were all around 6-foot to 6-foot-2. We stuck out like a sore thumb and were the ones that were immediately blamed.”

In addition to school discipline, the GBHS FBLA program ended up suffering other consequences, including one student, a senior, whose college letter of recommendation from International Baccalaureate business teacher Sampson was revoked.

“It’s not fair at all, the timing was awful,” Gonzalez said. “It was a week and a half before most of his private university deadlines. He was working on his applications when we were in our hotel room.”

Gonzalez said it was a significant penalty because of the importance of a college letter of recommendation.

Senior Jake McKillop, a former  student in Sampson’s I.B. Business class, said he thought the revocation of the letter was surprising.

“I feel as if it is surprising – this student has never has been punished before, or anyone else in the program, so when I heard about it, I would never have guessed the repercussions would have been so severe.”

Advanced Placement psychology teacher Natalie Elkin said the decision to revoke a letter isn’t one  an educator would take lightly.

“We (as teachers) take the risk for vouching for (a student) – what does it say about my integrity when I know a student has cheated or lied in some significant way?” Elkin said. “(The university now knows) my letter is a lie. That means my integrity is challenged because a university wouldn’t trust anything I say anymore.”

After being suspended from the convention, the GBHS FBLA chapter has taken steps to do better as an organization, including starting a fund and donation drive for the victims of the Camp fire in Butte County’s community of Paradise. According to Senior T.J.Patterson, the club gathered blankets, pillows and in total, $200 in gift cards.

“It wasn’t just FBLA – it was Granite Bay’s reputation that went down,” Gonzalez said.

McKillop, for one, appreciates the efforts FBLA members are making to show contrition.

“While the FBLA kids did what they did at the conference, many people will remember the Chico donations, they set aside time, and it is genuine,” McKillop said. “While everyone isn’t going to change an opinion about them, it did mine.”

Editor’s note: The original version of this story included the names of all of the students who were disciplined, information that was obtained by Gazette/GraniteBayToday.org staff writer and editor Max Schwartz. However, the Gazette has now changed its policy about printing the names of students involved in disciplinary proceedings, and so this version of the story, and all electronic versions, do not include the names. 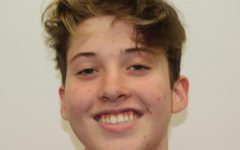