Your perfect soulmate could be someone’s cell-mate 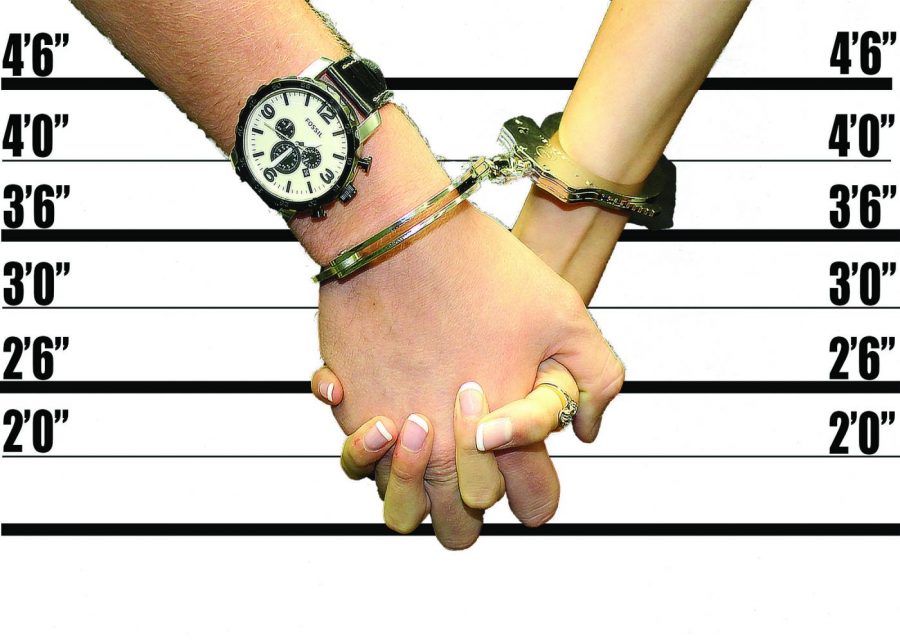 In California, sexual intercourse between an adult and a minor is illegal, even if the age difference is only one year.

High school is a time for students to not only expand their education, but a time for them to learn lessons from their friendships, schoolwork and relationships.

But how hard should those lessons be? A slap on the wrist, a bad grade, a falling out with a friend – or maybe a conviction for statutory rape.

Students in sexual relationships – often seniors – can face this concern. If students are in a relationship where one of the partners turns 18 before the other and they are engaging in sexual activity, the older partner can be prosecuted – no matter their gender.

There is a misconception that only men can be prosecuted for statutory rape. That not true, and yet men are still the ones who are stereotyped as the ones who will get charged.

They’re also often the ones who tend to get more tense about the subject when they turn 18.

“I think guys usually worry more because they are often labeled as the predator in those types of situations,” said a senior girl who asked to remain anonymous and whose significant other is turning 18. “Many times relationships consist of an older guy and a younger girl… (and that) age difference (can) be less than a year, like it is for (my boyfriend and I), or more substantial as it is with some older couples.”

This is because the legal age of consent in California is 18. Even if the minor thinks they are consenting, legally they are not.

Any third party can report the relationship as a crime if the one being reported is in a relationship with a minor and if both partners are sexually active.

Many other states have enacted the Romeo and Juliet laws, which are laws that modify the statutory rape laws for teens from 13 years of age to 19 years of age engaging in consensual sexual activity. The laws were created to protect relationships from ridicule when there is a minor age difference between the partners.  These laws vary from state to state. Yet, in all states, same-sex relations were excluded from being protected.

In states such as Hawaii and Maine, the age difference that is allowed between a minor (at the age of 16)  and an adult is five years. In California, Florida and North Dakota, where the age of consent is 18, there have been no modifications. In these states, an adult in a sexual relationship of any kind with a minor is engaging in illegal activity.

“I think there should be (provisions to the law that make allowances for consensual relationships),” she said. “I think that more provisions like this should be made across the country so people in situations like us don’t have to worry about it.”

Statutory rape cases are often the result of complaints from the parents of the minor in the relationship,  but there are ways to try prevent this from happening.

In California, under state Penal Code 261.5, an adult in a consensual relationship with a minor won’t necessarily be forced to register on the  sexual offenders list. The punishment for each conviction is different. The can either be charged as a misdemeanor or as a felony.

If an adult is charged with a misdemeanor, the possible penalty is a fine of up to $1,000 and either probation or a sentence of up to a year in county jail.

For a felony, however, the penalties are potentially much more severe. The adult can end up with as little as probation or as much as three years in prison. (If the adult is 21 or older and the minor was under 16, sentences can be much longer.) The possible fine can be as much as $10,000.

“It comes with the trust,” he said. “I can’t imagine (my girlfriend’s) parents ever wanting to do that to me, especially because they would understand that (the relationship has been) consensual all the way through. And I can’t imagine … my parents doing that to her.”

The girlfriend said the criminalization of relationships where one of the partners is a minor is somewhat irrational.

“I don’t think it should be labeled as a crime when we’re both consenting individuals who make our own decisions, and neither of us expect things to change because of a birthday,” she said. “In other cases such as non-consensual instances or an older individual taking advantage of someone who is, say, 13, I think that it is necessary.”

Elkin explained that teens in relationships don’t usually think about all the precautions or their actions because the frontal lobe of their brain simply hasn’t fully developed, making it hard for them to make the best judgments.