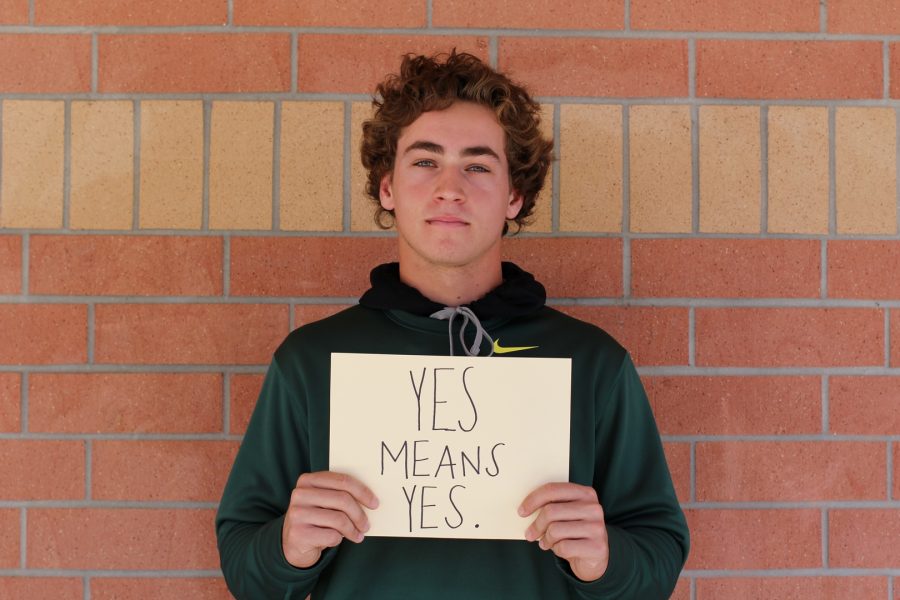 California is saying “no” to sexual assault and “yes” to consent. Jerry Brown, California’s state governor, recently signed the ‘Yes Means Yes’ bill, which will go into effect for all colleges and universities that accept state financial aid.

Sexual assault has in fact been present in the lives of some GBHS students.

“I was with a boy who wanted to hang out,” a recent GBHS graduate said. “We were driving around and had nothing to do (when) eventually he approached a park and pulled over.”

The graduate said the park had no lights and the boy she was with insisted they hook up sexually.

“I said no and wanted to go home, but next thing I knew he locked the doors and he grabbed me and told me to calm down. I kept saying that I didn’t want to do this but he proceeded to undress me,” the recent GBHS graduate said. “What I remember most is him constantly telling me to be quiet and calm down. Once I started being loud he put his pants back on and drove me home. He said that if I told anybody then he would tell the whole school I was just a slut who wanted it.”

Acts of sexual assault in the Granite Bay community seem to most often occur, in some form, at parties that take place at private homes in the area on weekends.

“At every party there is at least one instance where it happens to one girl or even a guy,” said junior Ally Rubino. “At least twice a party, maybe even more.”

Junior Bailey Chairez-Nelson said she had seen at least three acts of sexual harassment or assault in the past year first-hand. Acts of sexual assault also tend to happen when alcohol is present and people are intoxicated.

“Because there are a lot of parties in the Granite Bay area and I know a lot of people that don’t really control themselves when they’re drinking, so they tend to make stupid mistakes,” Chairez- Nelson said. “There are big consequences for that.”

Although acts of sexual assault seem to be happening regularly in the community, it is not an issue regularly discussed throughout the hallways of GBHS.

“We don’t really talk about sexual assault in our community because it’s kind of taboo, it’s kind of like we have that mentality of the victim is the perpetrator,” said senior Erin Caracristi and president of the STOP Sex Trafficking Of People club. “I know it’s very, ‘Don’t ask, don’t tell’ here … because we don’t think that could happen inside the bubble.”

This “bubble” complex of the Granite Bay community might be one of the reasons why acts of sexual assault aren’t common knowledge.

“I think we talk about (sexual assault) pretty openly, but no one is really aware of it,” Chairez- Nelson said. “It really comes with the image of the school of like,‘We don’t do these kinds of things.’”

While sexual assault isn’t talked about on a consistent basis, it is still a known issue that affects many GBHS students.

“I think that there are girls at our school that have had stuff happen to them where they don’t feel comfortable talking to anyone about it,” Rubino said. “I think that’s an issue because … girls and boys should feel more comfortable to (say), ‘This is what happened to me over the weekend, and it’s somebody at this school.’”

Rubino said girls who have been assaulted might feel embarrassed or shy and choose not to speak up, thus falsely giving predators the misconception they can get away with anything they want.

The lack of discussion about sexual assault at GBHS can also cause misconceptions about such acts.

“I think that most schools degrade how often it happens and they make it seem like you will only be assaulted if you’re alone in a dark alley,” the recent GBHS graduate said. “But the reality is that it can happen anytime, even with someone you trusted.”

The topic of sexual assault is also not addressed regularly at GBHS for students.

“I think we should raise awareness like yes does mean yes and if they say no, don’t do it, even if they’re intoxicated, don’t do that,” Caracristi said. “There’s this whole mentality like, ‘Oh he couldn’t control himself,’ and ‘Oh, she was wearing that dress,’ ‘Oh, she was drunk,’ ‘Oh she was flirting with him,’ like it’s always her fault, it’s never his fault. We need to … lay down the rules.”

Educating students at a young age about sexual assault and safe and consensual sexual acts might have a direct influence on decreasing sexual assault.

When educated, by the time students reach college they will be readily informed and most likely less susceptible to sexually assault. During the duration of their college careers, one out of five women will be the victim of a completed or attempted sexual assault, according to a 2007 study by the Department of Justice. The ‘Yes Means Yes’ bill is seeking to end sexual assaults on state funded college campuses.