To Dress or Not to Dress? It’s Up to the Pets 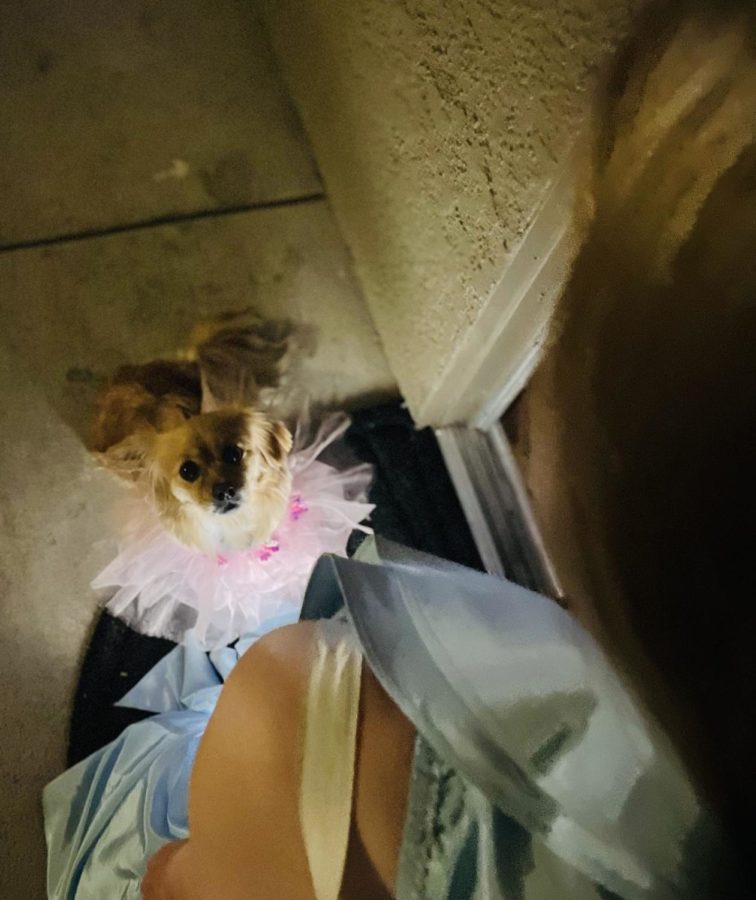 Luna, the Pekingese and Chihuahua mix, stares curiously at the camera, wondering why she has a costume on.

Snickers, a chihuahua poodle mix, huddles in the corner as he watches the enemy advance at his sister, Ezra. She sits there, wagging her tail, obviously unsuspecting of the predator’s main attack: giving its prey a whole new look.

As spooky season looms over Granite Bay High School, pet owners like that of Snickers and Ezra are eagerly awaiting the chance to dress up their furry friends. However, this sibling pair perfectly embodies “not all pets are made the same,” a phrase that most students and staff argue affects their final verdict on the ethicality of dressing up pets.

In a recent poll from Granite Bay Today, 89 out of 181 students’ response to dressing up animals “depends on the pet,” while 68 were completely for this festivity and 24 were against it. Along with this, pet parents like Lee Randolph, a senior and committed dog trainer on campus, explain that the reasoning behind their opinion has a lot to do with the mental and physical comfort of each and every type of furry friend.

“It’s ethical in my circumstance (to dress up pets). My dog, Ezra, has been trained very highly to wear clothes and to tolerate a lot of different things,” Randolph said. “Whereas my other dog, Snickers…(is) terrified of everything. I would not dress him up because it would just scare him.”

Without desensitization training, dressing up your animal may be difficult.

“Some pets aren’t used to having things on their body. The texture of different materials can bother them,” Randolph said.

Veterinarian Katrina Estes works at Rocklin Ranch Veterinary Hospital, and has put accessories on her dog in the past. Like Randolph, she feels that a pet’s response to an outfit should influence the decisions owners make when dressing them up.

“I have no problem with dressing up pets as long as they’re okay with it,” she said.

As Randolph communicated, some animals may feel physical discomfort while in a costume, a viewpoint Estes shares. Furthermore, Estes adds that our pets can experience social distress similar to us.

“(For) some animals…, (dressing up is) a super positive reinforcement…(because) they’re going to get attention,” she said. “You have introverts…, and (when) we put a dress on (that pet) and pass it off to our twenty relatives…, that animal’s going to hide either more, or be fearful.”

The viewpoints of both student and veterinarian don’t end there. The two explain that a pet’s body language including tucking of the tail, constantly moving of eyes, or even freezing or lowering of their body is a sign of discomfort.

In particular, Randolph warns that ignoring these signs can have noticeable consequences.

“Worst case scenario, your dog bites someone,” they said. Similar to Estes’ thought, Randolph says that forcing a pet to wear something can cause it to “create a negative association with…that certain thing.”

For Estes, preventing these effects can be simple as long as pet parents pay attention to the body language of their furry friends.

“I would say (the choice to dress up or not dress up pets) is (from) personal experience of being a vet for how many years I am…(and) trying to learn animal behavior,” she said. “(But) to some extent, it’s common sense, not in a rude way.”

Julie Ford is a PE 9 teacher at Granite Bay High School that, when given the chance, enjoy’s dressing up her dogs. For her, common sense plays a role in her view on pets in costumes.

“Yes, (my opinion) is dependent on the pet. I wouldn’t dress up a giraffe,” she said in an email.

However, Ford argues that her dogs are suitable for costuming festivities –  in her opinion, her pups show little distress when placed in a costume.

“My dogs don’t mind (being dressed up).  My dog and I were dressed in a referee’s uniform one year. His said “rufferee” and he wore it proudly,” she said in the same email.

Ford is not the only one who recalls an experience that added to her opinion. Randolph remembers when their friend made a simple yet perspective-changing initiative at a costume competition.

“(My friend’s) dog had a little witch hat on, but (the dog) kept pulling at it to get it off…my friend saw that she was uncomfortable with that and took off the little hat,” Randolph said. “Making little adjustments like that can make a big difference for everyone.”

Garrett Golden, a freshman at GBHS, believes that a pet will feel awkward no matter the costume.

Like experts Estes and Randolph, Golden argues that the physical comfort of a pet also comes into play. However, Golden’s opinion depends greatly on the handling of the animal and less on the costume itself.

“If you’re rough and not gentle with (your pet), they obviously won’t like that.” he said.

Yet, why go through the worry of trying to determine what might anger your pet? Put simply, why dress them up in the first place?

Words including internet, Snapchat, and Instagram were popular answers among interviewees.

As Estes purposely mentioned multiple times, understanding the comfort level of our pets is the most important part of dressing them up. The addictive nature of social media distracts us from recognizing this.

“(You) show (your pet) off to your friends, or even take pictures of it and put it on Instagram. The(re’s) instant gratification,” Estes said. “People are really bonded to their pets and they feel like that’s enhancing that bond. It’s not always enhancing the bond with the pet honestly.”

To further this, Randolph stresses the importance of being assertive while having fun.

“Don’t totally ignore (your pets).., pets are part of the family. They’re part of our community.”