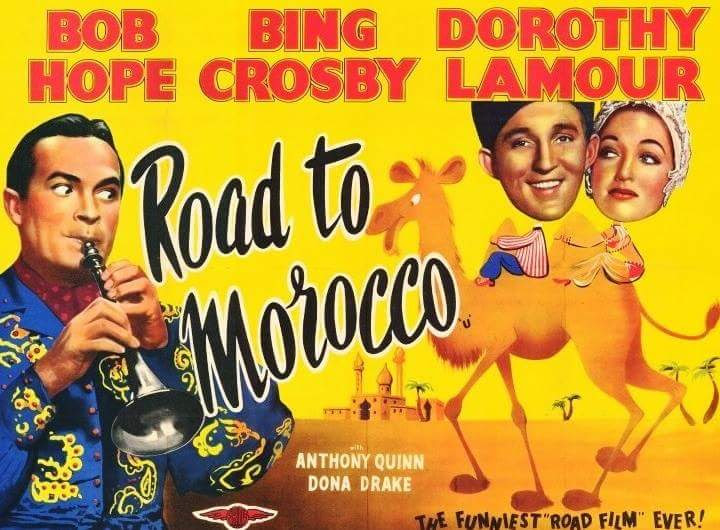 Entertainment in the 1940’s had so many great aspects that today’s society lacks.

Individuals like Glenn Miller and The Andrews Sisters we’re breaking new ground in music and cinema was making leaps and bounds in a new and exciting direction.

Bing Crosby and Bob Hope were two such individuals whose influence is still felt today due to their creativity and showmanship.

Road to Morocco showcases the awe-inspiring dynamic between the innovative duo.

The third movie in the “Road to…” series, Road to Morocco follows Jeff Peters (Crosby) and Orville Jackson (Hope) as they make their way into Morocco after being shipwrecked.

From the opening scene as the two sing the fourth wall breaking theme song, Crosby and Hope satirize the state of American society – the film is ahead of its time.

The relationship between the two main characters is that of selfishness, which allows for Crosby and Hope to stab the other in the back for personal gain.

The cutting wit of the two actors really makes this the perfect comedy. This is the type of movie that one can watch topically and love just as much as the analytical viewer.

With the majority of the script improvised, the overall atmosphere of the film becomes so much more genuine. The viewer really sympathizes with the two friends as they stumble from situation to situation.

There are so many jabs at the stereotypes of different cultures in the movie; from Americans being oblivious and insensitive, to individuals in the Middle East being overly traditional no matter the absurdity of the tradition.

Hope and Crosby also make frequent funny, yet true observations about Hollywood, such as the silliness of having too many sequels and advertizing in films.

All hilarity and social commentary aside, the film is just a great story of adventure and camaraderie. There’s something so entertaining in seeing two Americans sticking out like a sore thumb in a different country.

I’m not the only one who fell in love with this masterpiece. In 1942, this was the number four film in the nation and the number one adventure movie.

This film raises the bar as far as comedies go. It popularized the fourth wall break, which draws you into the film by constantly reminding you of where you are.

I loved this film because it’s a refreshing break from the redundant and topical comedies that we’ve grown accustomed to today. Filmmakers can learn a thing or two by watching the “Road to…” movies.

This picture exemplifies how an incredible dynamic between two actors can elevate the quality of a film.

Watch this movie. End of story.