The Tribe is given new football regulations 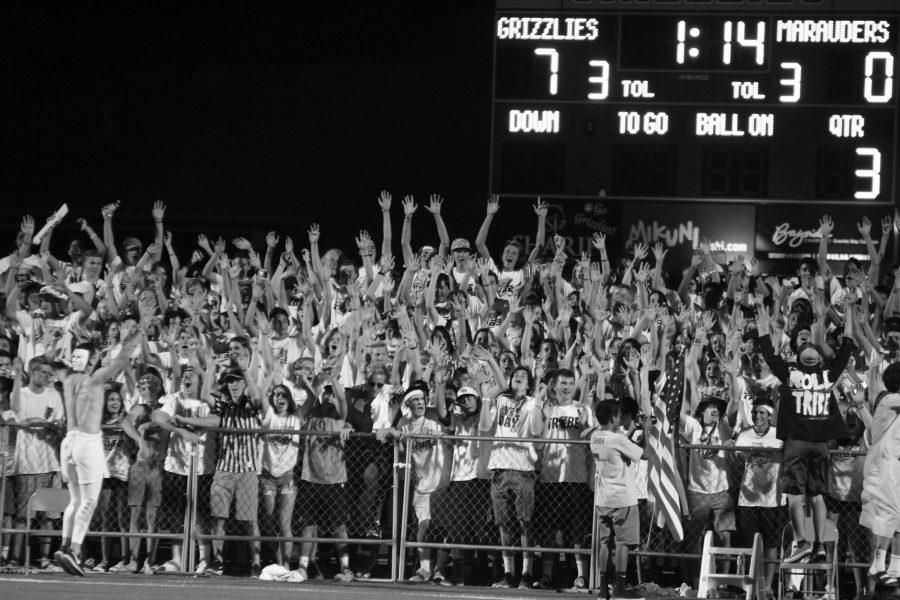 The last football home game for Granite Bay High School was a different sight for many fans and viewers.

The Tribe, GBHS’s student section, wasn’t in its normal cheering area behind the endzone, instead they were in the stands.

This change was made due to a damaged fence where the Tribe previously rooted on their team.

“Originally at the beginning of the year they wanted us to move up to the stands because we broke the fence last year,” senior Tribe leader Joey Scotti said.

However after talking with the administration and the football team they decided it would be best to stay on the field.

The Tribe leaders have responded to the move in a positive manner pointing out that it actually helped them get the crowd into the game and provide fans with a better viewing area, especially for homecoming.

“We tried staying positive about (moving to the bleachers),” senior Tribe leader Charlie Tooley said. “It kinda worked out since it was homecoming so we could see all the floats and the whole event.”

They also felt the change benefits the team.

“I think from my point of view we were louder up in the stands.” Scotti said. “Initially we were kinda disappointed with it, but at the same time I think it is better because everyone’s in a tighter area and it’s easier to get the chants across.”

While the change has only affected their last home game of the regular season, the leaders say that if the team has a home playoff game or another sporting event on the football field then they are going to stay in the stands.

However, not everyone agreed that the stands were the optimal viewing area.

Senior Hailey Dredge, who has enjoyed being a member of the Tribe since her freshmen year, doesn’t like the move to the stands as much, despite thinking that the Tribe has improved as a whole this year.

“I like the field better because I feel like everyone’s more into the game,” Dredge said. “In the stands there was a lot of talking and not as much chanting as there would usually be.”

She also agreed with the leaders that moving to the stands for homecoming is a good idea.

“I think it enhanced (homecoming) cause we got to see (the floats) better and the people on the floats got to see (everyone in the stands together),” Dredge said.

Senior Alex Rocha agreed with Dredge in that the spot was great for homecoming, but felt it wasn’t the same as being on the field.

“You have a better view of the … homecoming ceremony where they crown the king and queen, but a worse view of the game,” Rocha said.

Tooley believes that while the view might not been as good, the experience was more exciting.

“Since we were all together we enjoyed it more, we thought everyone had more fun,” Tooley said.

The leaders are also looking forward to the upcoming basketball season, a busy time for the Tribe.

“The Tribe is very different than what it is at football games because basketball is more of an up and down sports rather than football where there’s a lot of breaks,” Tooley said.

Tooley is excited for their signature tradition of dancing to the song “Original Don” during halftimes of special home games against rivals or big opponents.

As the year is progressing the Tribe leaders want to encourage everybody to try cheering on some sports they wouldn’t have thought of watching before.

“We want to get people to go to a variety of sports,” Tooley said. “It’s not necessary going there and doing chants, it’s more just being there for moral support and cheering them on.”