The Struggles of Students With MALS 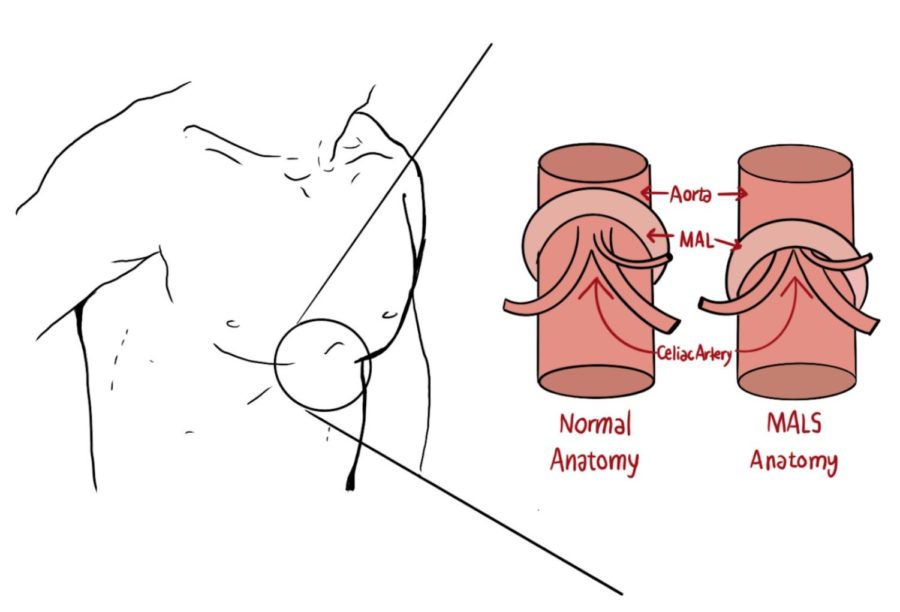 A diagram that shows where and how MALS affects someone's celiac artery.

Sitting in class, Ashley Fullmer’s vision starts to get blurry and her stomach is in excruciating abdominal pain. Trying her best to pay attention and not cause a scene, Ashley sits there as silent as possible while suffering.

The struggle that students with MALS and/or POTS have to deal with is worse than people might think.

MALS; Median arcuate ligament syndrome is a very rare chronic illness and with a quick Google search, there was very little about this illness. MALS is a chronic illness in which the nerves are being pinched over the celiac artery. POTS, which stands for postural orthostatic tachycardia syndrome, affects circulation of blood throughout the body. It involves the autonomic nervous system, which controls and regulates vital bodily functions, and the sympathetic nervous system, which activates the fight or flight response.

“For MALS I experience pain after eating and when touching my stomach, nausea, vomiting, limited movement due to pain in my upper stomach and 24/7 stomach ache (and) chronic upper abdominal pain.” Fullmer, a junior at Independence High School said.

MALS most often occurs in thin, younger women and can cause a range of such symptoms. MALS is often found in patients who also have POTS—over 50 percent of POTS patients are found to have MALS. MALS is found to be more common in female POTS patients.

“I had to miss a lot of school because of it. … I couldn’t eat during or before school without the pain being worse than the feeling of hunger. And so I would either have to choose to deal with the pain at school or feeling dizzy and hungry and lightheaded.” Fullmer said.

Students with chronic illnesses miss a lot of school, often because they need to go to the hospital, recover at home or attend regular medical appointments. This leads to decreased academic performance and difficulty getting around the school environment, particularly in participating in school activities.

“MALS is so extremely rare, and so, unresearched that, like, 90% of doctors have never even heard of it.” Olivia Stenson, a junior at GBHS with MALS, said.

Of the 7,000 known rare diseases, approximately 95 percent have no treatment. Many rare diseases and disorders aren’t studied by medical researchers and often, patients are treated “off-label”.

“Healthcare is one of the only places where you pay ridiculous amounts of money for, in some circumstances, no action and no results. A cured patient is a lost customer.” Emily Fullmer, Ashley Fullmer’s oldest sister, said when asked what resources she wished she had for her sister when she started experiencing symptoms.

It is very common for such patients to have a delayed diagnosis or a misdiagnosis, which can result in the patient becoming confused and potentially distraught when the course of treatment recommended doesn’t work. They may feel it’s a personal failing and even develop feelings of guilt or shame when they don’t make progress under the diagnosis.

“During (the) MALS surgery, my surgeon removed all of the dead and damaged cells that were being compressed by my diaphragm, since my diaphragm was too low in my body,” Fullmer said. “It was killing and compressing alert nerves that were surrounding some major arteries that branched off of my aorta. … My nerve damage was an eight out of 10 … Recovery has been hard but rewarding. I know it will pay off in the long run.”

Stenson has a different experience with recovery than Fullmer did.

“The surgical pain was never as bad as my MALS pain, it never got to a point of how I would feel every single day so I do not regret surgery at all and I’ve already seen so many improvements, it’s like I’m a whole different person, that’s like really crazy,” Stenson said.

“I want people to realize that I’m more than just a sickness, I’m in a lot of ways the same (person) that I was before, and I don’t want people to treat me differently because of it.” Fullmer said.