The siege of the seagulls. 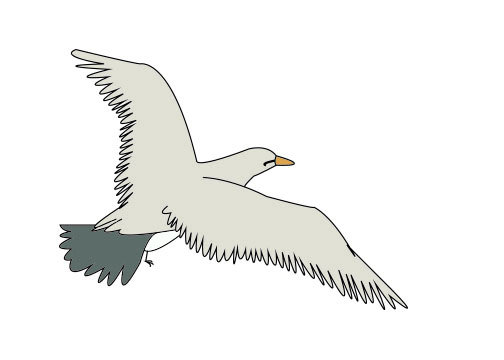 Some call it a right of passage, others consider it an omen.  Still, more scream hysterically.  Most of the Granite Bay High School student body considers it a mildly disgusting nuisance.

Pooping is not normally acceptable outside of designated areas on campus, except if you are a seagull. Not only are they granted the privilege to poop wherever they want, they can even let their bowels loose on students.

The seagulls have been a part of campus life at GBHS since the inception of the school. In fact, according to assistant principal Brian McNulty, ideas for lunchtime activities have stemmed from their presence.

Senior Michaela Setiawan has built both a fascination and respect for the birds.

Her infatuation with the seagulls started when her friends and her were trying to avoid getting “hit” by the birds’ flying feces when they noticed that a few of the birds were “special.”

“There are two birds that don’t have any legs,” Setiawan said. “There’s also another seagull that has one leg dangling when it flies.”

Over the course of the next few months, Setiawan and her friends took up bird watching during their free time at lunch, attempting to spot these mysterious no-legged birds land.

“I haven’t witnessed them landing before,” Setiawan admitted.

Although her admiration for the handicapped birds is evident, Setiawan also has a certain level of appreciation for the rest of the seagulls.

“I love having the seagulls on campus,” Setiawan said. “Their presence is beautiful and adds character to our school.”

Junior Nikki Zavesky has a polar-opposite attitude towards GBHS’ feathery friends (or foes).

“I hate the seagulls flying around campus all the time,” Zavesky said.

Zavesky’s dislike of birds has been a part of her life since she can remember.

Although the problem has never interfered with her punctuality, Zavesky views the birds with a certain animosity and fear.

“I have to run into class terrified and I embarrass myself,” she said.

As Setiawan keeps her eyes peeled for seagulls without appendages, she also makes sure to stay outside the birds’ target zones to avoid the presents that the birds drop from time to time.

Zavesky too keeps a safe distance at all times.

“When I see a seagull I will most likely scream and run away if I feel like I’m in danger of it attacking me,” Zavesky said.

While Setiawan is relatively happy with the current situation, she admits that she is yet to be pooped on by one of  the seagulls.

“That’s why I can have such a positive attitude towards them,” she said.

Zavesky, although in the same no-poop club as Setiawan, believes that measures should be taken in order to minimize the seagull presence on campus.

“I don’t know if there are such things as bird exterminators, but if not, people should at least not leave food around so they don’t swoop down,” Zavesky said.

Setiawan agrees that there is room for improvement to help both students and seagulls alike on the GBHS campus.

“We shouldn’t leave out trash or anything that attracts them,” Setiawan says, “because it increases the amount of people getting pooped on.”