The lasting effects of public postings 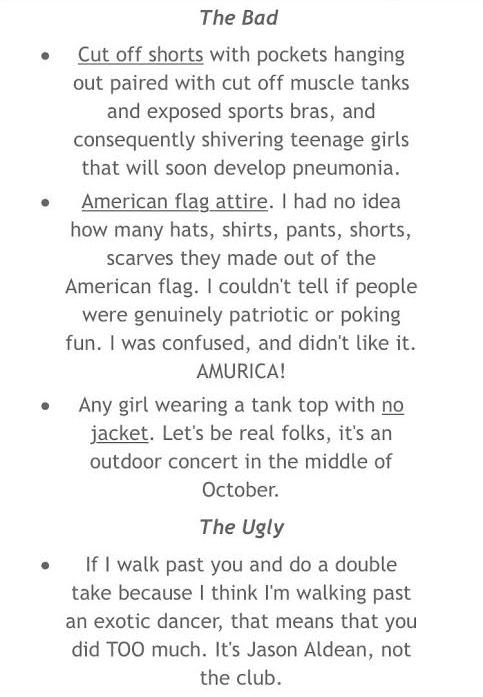 The image above is an excerpt from a post on Melanie Anvari’s blog, “justcallmelolatoday.” This post was published in 2013.

In most cases of judgments involving students and faculty members, it’s the student who is being judged and the faculty member who does the judging. But the recent discovery of a fashion-based blog produced by assistant principal Melanie Anvari has flipped that typical scenario.

Anvari had created a personal blog which was meant, she said, as a quasi-Joan Rivers’ “Fashion Police” mixed with Stacey London’s “What Not To Wear.” She intended it to serve as a kind of helpful-hint website – fashion policing from behind a screen. But students at GBHS who discovered the blog – which has since been deleted – were surprised and even offended by blog posts dating back to 2009-10, although the blog was last updated in late 2015.

“This was a while ago, 2009-2010 – a while ago – and, for the first part of college, I wanted to go into writing and … journalism,” Anvari said. “I started the blog because I was at the moment where I really wanted to be … a fashion (critic). Like the show (“Fashion Police” with) Joan Rivers and her daughter. I thought something like that would be the coolest thing.

“I started it because (I thought), ‘That’s it, that’s what I’m going to do if teaching doesn’t work out. I’m going to do this.’ I missed writing. When you’re in journalism, you change your style of writing to fit whatever you’re trying to do, and that was that style of writing. Since then, I definitely switched (my) blogging from ‘What Not To Wear’ type (of) fashion (posts) to more lifestyle-(themed posts), but I just started running out of time and my priorities shifted.”

The older posts, dating back to 2009, gained the most popularity as they were the most critical. Screenshots of these posts circulated among students and especially among seniors.

Sonia Matheus, a senior, said she first came into contact with Anvari’s blog after a friend showed her screenshots  of old posts.

“When I first read the pages sent to me, I just had to laugh out loud – it was utterly ridiculous,” Matheus said. “Not only were some of her comments degrading, but they were words that I wouldn’t expect to see come from a professional. I’ve never come into direct contact with Anvari, (so) the blog is the first time I had indirect contact with her, therefore I can’t tell you how she portrays herself as a person/professional. However, reading those comments really turned me off – I wouldn’t want to speak with anyone who openly degrades people, no matter if it was a thing of the past.”

Although these posts, along with the blog, have since been deleted, screenshots of the posts remain in circulation and have been distributed by students and others via text and group messages. Portions of the blog are still cached on the internet and can be found using Google.

The theme and content of the blog focuses mainly on criticizing the clothing choices of strangers.

They also include fashion tips: “General tip: DRESS FOR YOUR BODY TYPE. Not all (women) can pull off certain types of dresses, don’t kid yourselves! … Take someone (shopping with you) who will let you know that clingy fabrics are not the best choice for larger-sized dresses, this way you can save yourself from being on this blog.” (published in 2009)

Additionally, they give personal pointers: “Personal choice: I never wear leggings with a shirt that is too short. After all, leggings cling to EVERYTHING! … Moral of the story: ‘Cover the cookie or else he is gonna want to eat it,’ as quoted from my … stripper dance class.” (published in 2009)

By contrast, the tone of Anvari’s blog changed by 2015. In a post in November 2015, Anvari discussed how, in a conversation with a friend, they were “laughing up a storm” while using a free social media app called Bitmoji. She also posted photos and commentary about decorating her apartment with her boyfriend.

Some students who read the older posts were surprised that, given the ease of finding the blog online, it apparently didn’t come up when Anvari was being hired as an interim assistant principal. It isn’t clear whether the blog was discovered by the hiring committee or taken into account during the hiring process.

“I am going to pass on this one,” Severson said in an email. “Not sure I want to be even a part of this story.”

According to the Professional Standards for all district employees, “inappropriate employee conduct includes, but is not limited to … using profane, obscene or abusive language against students, parents/guardians, staff or community members.”

All district employees are held to the standards listed and expected to perform in such a manner as to meet these expectations.

The fact that the blog is so accessible shocked seniors Macayla Thomas and Ryder Sanders, who both said they thought it should have been a factor in the hiring process.

“I was very shocked to see that something like that would still be up when she is going out looking for jobs,” Sanders said. “I was also shocked that our admin did not find it in the hiring process.”

Anvari said she generally does not think an online presence should necessarily be relevant in the hiring process, as long as a person’s personal and work life remain separate.

Ironically, Anvari is partially responsible for enforcing the dress code on campus.

“If she were to enforce dress code, her words on the blog make it look like she could be dress coding people based off of her standards of what’s appropriate,” Matheus says, “(rather than) what is actually prohibited.”

Anvari said the purpose of her blog posts was never to harass or offend individuals by name, and especially not students.

She also said that, as the only female assistant principal, it is her goal to strive to become an ally for the female population, especially senior girls. Anvari said she wants to repair what might be a broken relationship with senior females.

However, some male seniors might have been offended by particular blog posts. Sanders, for example, said he was upset by comments on a blog post from 2013 about American Flag Attire that classified all such clothing under the category “The Bad.”

“I had no idea how many hats, shirts, pants, shorts, scarves they made out of the American flag,” Anvari wrote in her blog. “I couldn’t tell if people were genuinely patriotic or poking fun. I was confused and I didn’t like it.”

Sanders said he thought these comments were “disrespectful and rude” because being patriotic, even through clothing, is not something which should be “frowned upon.”

Most teachers don’t have a significant digital footprint – or if they do, it isn’t generally accessible to students. Given her relatively new status as a GBHS staff member, some students are asking if her blog posts have had a lasting effect on her professional reputation.

“I have never had any personal interaction with Anvari, but … it made a lasting impression,” senior Macayla Thomas said. “To me, it is highly unprofessional to have … a blog that comes off as very superficial and judgmental which we need less of, not more.”

Other students, however, disagree.

“The screenshots that I saw – (because the blog) was taken down before I could see it – were all from five or six years ago,” said a senior girl who asked to remain anonymous. “If you think about it, everyone has done stupid things in their past, and this was nearly a decade ago. If it was more recent, I would probably be more upset about it, but it’s in her past and hopefully she’s different now.”

According to Anvari, while she said she does not regret any of the posts, she also said she deleted the blog because she heard students were upset – and the second students either misinterpreted or took offense is when she knew it had to go.

At the time, Anvari said she meant every word she said, but when posting online, it is important to think of how comments can be perceived from others’ point of view. Also, she said she wishes students would talk directly to her instead of talking to other students about her.

“I don’t think I did anything wrong, I just want to fix how people are feeling,” Anvari said. “What I wish is that people would come talk to me instead of talking about it with other people. And I say that to students all the time too, because the biggest conflicts can arise when people talk about (things) with other people instead of involving that person.

“I would never, ever … talk about my students that I work with – that is so unprofessional. I just want people to talk to me about it so they can understand. I don’t want to hear that they talked to (others first). That’s not going to solve anything, it’s just going to make it worse.”

The members of the millennial generation – those born roughly between 1980-2000 – face a new threat of outward surveillance, a new form of scrutiny that can haunt them even from their past. A millennial’s online presence, depending on what they’ve posted, might hinder employment opportunities and relationships – a more modern problem not seen often by older generations.

This problem is especially groundbreaking because with the speed and efficiency of modern technology, a person’s whole past – regrettable or otherwise – can effortlessly appear on the screen of any leisurely Google-user.

According to a report published by On Device Research, a market analysis firm, one in 10 young people 18 to 34 who are looking for a job have not been employed because of their activity on social media. Yet 70 percent of those surveyed also said they had no concerns about the impact of their personal social media accounts on their chances of finding employment.

Additionally, 66 percent said the threat of social media impacting future employment opportunities would not hinder their use of it.

“I think the lesson about online presence is to just be careful,” Matheus said. “Nothing really gets fully erased on the internet, and the web is a much different and a more comprehensive place than has ever been created. Of course people can publicize their opinions in America, but it is important to put things into context. View everything in context, and of course use your brain.”

For Anvari, the lesson is to remember that whatever is being posted is permanent.

“Once you put it out there, it’s there,” Anvari said. “You know what you meant by it and you know what you intended to say with it, but other people may perceive it differently. But at the same time, in life you can’t have regrets. That’s why I say I don’t regret (the blog). I thought about it and I meant every word I said and it was never meant towards anybody.

“I think this is a really great, teachable moment. Because … you’re constantly learning and growing as a person because every day is a new battle and a new struggle (and) … the cool thing out of this (situation) is that it’s not what you’ve done before, it’s where you go from there.”