The Granite Bay Theatre: Much Ado About Nothing 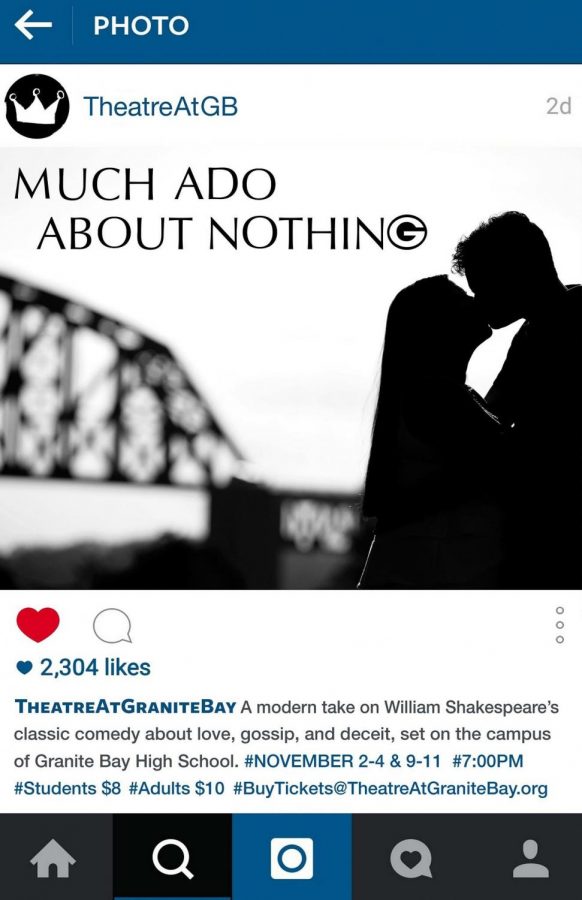 Shakespeare is back in Granite Bay, and this time it’s Much Ado About Something.

The Granite Bay High School Theatre program hosts its fall play — a modern take on Shakespeare’s “Much Ado About Nothing.”

The story takes place on campus at GBHS, where football players are adored by their peers and ASB runs the activities.

The tale follows young lovers and their difficulties impressing their interests. The audience sees the trials and tribulations of being an adolescent who searches for love. The modern adaptation of the classic play brings the writings of Shakespeare to life. With a cast of 40-some people, and a run time of 2 hours and 20 minutes, the show never waits for the viewer to catch up. The old English rewards the observant viewer with subtle humor and foreshadowing throughout.

“Our challenge was putting flare on Shakespeare’s play’s so that we’re not just watching people run around in tights,” said drama teacher and Granite Bay Theatre director Kyle Holmes

In an age where individuals seldom use such verbose words in their speech, the setting at GBHS takes away some of the complexity of the dialogue and makes it easier to understand.

Since the play has been adapted from a script written in the 1500s, the characters have been altered, too.

One of such characters is the ASB president Leonato, played by senior Olivia Caserta.

The professional drama class spent time in and out of school to ensure that the adaptation could be as good as possible.

Students worked together create their own world in which the play took place. Although the script remains pretty true to the original, they had to decide how a setting of GBHS would fit into the story.

“Unlike other schools and other theater programs, the Granite Bay Theatre program is completely student run, there’s no involvement from parents or otherwise,” said supporting lead actress Georgia Seagraves.

Not only was the script adjusted to be as realistic as possible, but the set was as well.

Because the story takes place at Granite Bay High, the set has been made in its exact likeness.

Holmes and the cast wanted to make the set look the same as GBHS in real life. Everything down to the brick color is the same.  The set even includes four monitors that simulate posters and the screens of phones.

“There are 1,037 bricks, we have a Gazette newspaper rack, and we have a trash can used on campus,” Holmes said.