Synthetic Turf: Are You At Risk? 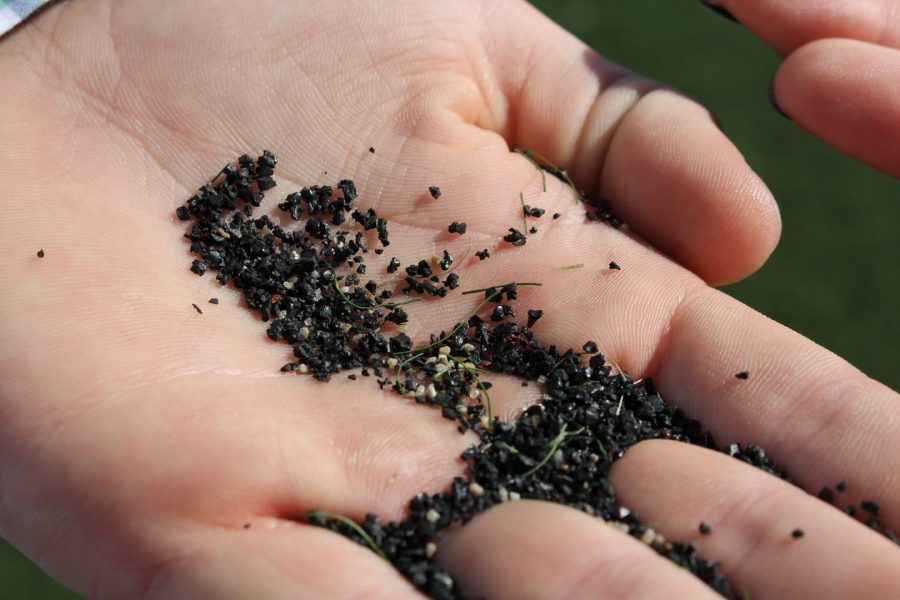 At the University of Washington in Seattle, Washington, the women’s assistant soccer coach and goalkeeper trainer, Amy Griffin, discovered that 13 players (11 of the 13 being goalkeepers,) have been diagnosed with severe cancers. At first, most attributed the fact that these players possessed cancer and spent years on artificial turf as a coincidence.

However, as Griffin and others found out, was that the amount of sweat and blood coupled with the grained up residue that clings to skin as well as the loose pieces of cut up tires, gets into the pores and blood of athletes that causes an assortment of diseases and potentially cancers later on..

Artificial turf is comprised of granular materials like crumb rubber or tires and flexible plastic pellets, to add a padding to the field. Ingrained in these pellets are metals often times like lead as well as Zinc, and run the risk of containing harmful substances like arsenic, cadmium, chromium and selenium.

The link between the health risks of artificial turf and athletes is becoming all too real.

“As an athlete, it’s concerning when I look at a turf burn and realize how easily it can get infected, but when I’m in a game, it never even crosses my mind,” Holt said. “Slide tackles and hard falls are just a part of the game. The pain comes after the adrenaline of play, and the majority of athletes are good about cleaning their wounds at the time, in hopes to prevent infections.”

Because the blood stream is exposed quite often as turf tends to rip open the skin, the toxins that are embedded could lead to diseases like mrsa in the short run, and potentially cancers in the long run.

Orthopedic surgeon and specialist in sports medicine, Doctor Hunter Greene, works closely with many local athletes with injuries and infections from sports play.

“A lot of it depends on the generation of the astro turf, it has evolved over time. The original astroturf was basically like playing on concrete, so there were a lot of injuries that came from that. some of the early injuries were named after that (like) turf toe and (that) occurs when athletes wear cleats on those early turfs,” Greene said. “If the school or club has an earlier turf field, so those athletes are playing on those fields, so they are definitely at risk.”

Seemingly, healthier options for athletes from the major turf-using sports like soccer, football and lacrosse could be implementing natural grass fields to help prevent these sorts of infections as well as other injuries.

Sophomore Ryan Byars plays GBHS lacrosse and football, so he spends the majority of his time practicing as well as playing directly on the turf.

“If it is really (that) big of a deal and can cause damage to our bodies, then yes I think (turf) should be removed from all sports,” Byars said. “I’m sure there are plenty of other healthy options and the school should take charge in this because it seems like a big deal, so they should change it up a bit.”

Greene works directly with athletes of all ages and expresses concern about certain kinds of turf fields that tend to cause injuries as well as infections, like mrsa, turf toe and intense burns.

“We see a lot of turf burns, from just the abrasions you get from the artificial turf surface and more recently, the other thing that is concerning and something that really worries me that has culturalized is mrsa. That can be cultured off the field and some people have gotten that,” Green said. “There is risk when you scrape yourself that the infection can come from the field. So that is one of the biggest concerns.”

The black crumb rubber that is layered under the fake grass, tends to be around ten degrees hotter than the actual air and encompasses the field. Goalkeepers in soccer hit and pound the ground more than any other sort of athlete, so the heat and turf beads are a primary concern for them.

Junior Laura Perjanik plays goalkeeper competitively, as well as for GBHS, and has discovered that turf is harmful to her well-being.

“I’m a little concerned, being that I spend a lot of time diving on turf as a goalie,” Perjanik said. “I don’t think (turf) should be (taken) away altogether, but if given the choice, between natural grass and artificial turf, schools and cities should choose the safer natural grass.”

Posed with the decision between turf and grass, cities, high schools, colleges and professional stadiums have chosen a wide range of different types playing surfaces. However, some athletes do prefer a natural surface to prevent these kinds of health risks.

“Every player has their favorite surfaces to play on depending on personal preference,” Holt said. “For me individually, I enjoy playing on Bermuda grass (because) I am aware of the dangerous diseases and cancers that can come from the toxins from artificial turf surfaces.”