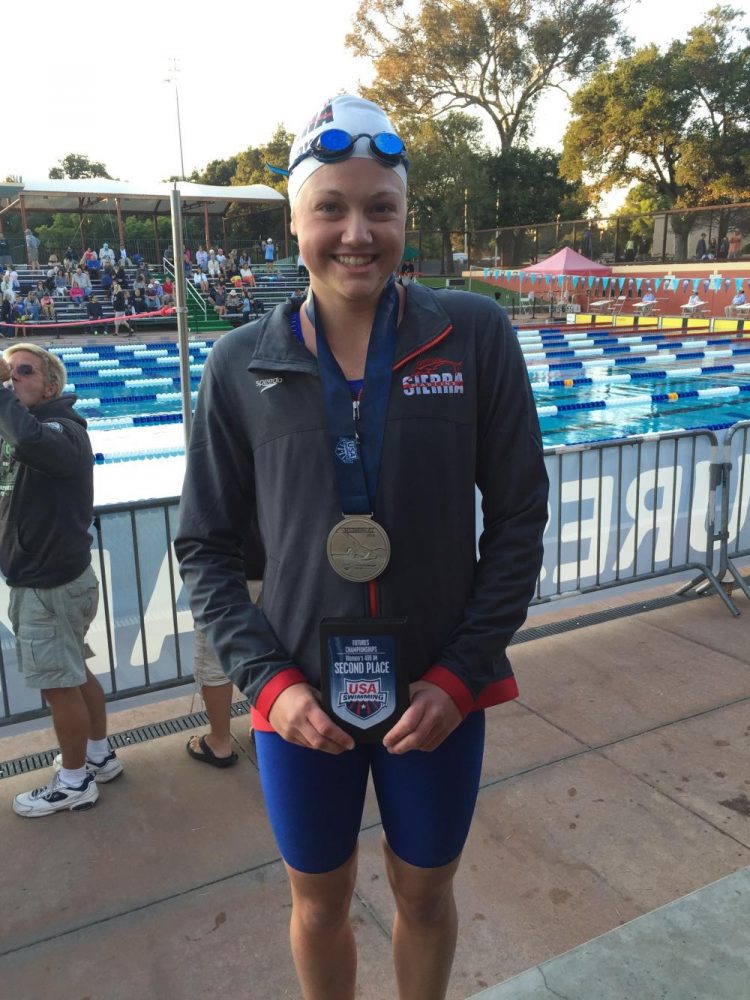 Granite Bay High School’s swim program has a strong record of having some of the fastest swimmers in the area – the girls team has been undefeated in the Sierra Foothill League Championships for 20 years.

Standout sophomore Chloe Clark has only aided in the program’s success during her time at GBHS. The extremely accomplished swimmer competes year-round for the Sierra Marlins Swim Team in Folsom.

Clark broke three school records in her first year of GBHS swim –the 50-yard freestyle at the 2016 league championships, as well as the 100 freestyle and the 100 backstroke during the 2016 section championships – all as a high school freshman, age 14 at the time.

“It was really fun for me to watch because I was a swimmer at high school sections when that record was set,” Alyssa Clark, Chloe’s mother, said. “(Chloe’s) time of 53.23 (seconds) ranked her eighth all time in the 13-14 age group in the 100 backstroke.”

Chloe Clark says her events differ from her club to school seasons.

Chloe was put into swimming at age 5 by her parents because she loved being in the water so much.

“We tried to expose her to lots of different sports,” Alyssa said. “When she was 12, she choose to focus solely on swimming. We let Chloe lead the way.”

Chloe is now on both the Sierra Marlins Swim Team, a competitive year-round program, and the GBHS varsity girls’ swim team. She practices solely with the Marlins, but she still swims at meets for the high school team.

“It’s just (her) drive to be the best she can be and to get out and race,” said Scott Shea, the head coach and CEO of the Sierra Marlins Swim Team. “She’s probably one of the best athletes that I’ve coached. She’s excited about racing, (and) she’s excited about challenging herself.”

According to Shea, the Sierra Marlins Swim team is ranked among the top 100 in the county, and placed fifth at Junior Nationals last year at Texas A&M in College Station, Texas.

“We have practices every day after school, on Saturdays and two morning practices a week before school,” Chloe said.

All of this practice adds up to about 16 hours of practice per week. Because of this rigorous schedule, Chloe has to miss out on some of the normal high school experiences.

“She plans her social life around swim practices and competitions …  and you can’t forget the two morning workouts before school each week,” Alyssa said. “As a family we try to honor her commitment to the sport because she is so dedicated. We make sure that (she) still (has) a lot of great childhood experiences even with Chloe’s busy schedule.”

With her intense schedule, Chloe has been forced to make sacrifices.

“I haven’t been able to go to Winter Ball because I’m always gone at my meets,” Chloe said. “My meets are more important to me, so I just have to realize that I have a different high school experience than other people.”

During the summer of 2016, Chloe made the Olympic Trials cut time in the 400 IM at the Futures Championships meet at Stanford. This means that she can go to the Olympic trials in 2020 – the next summer Olympics.

Chloe said she was happy to finally get her cut because she’d been trying to get it for so long.

“It was just me and this girl racing out ahead of everyone,” Chloe said. “Eventually at the end, she out-touched me so I was really mad when I touched the wall, but when I saw the time and I saw that I’d gotten my cut, I was so happy.”

Now, Chloe will continue training for the Olympic Trials and will be going as long as she continues to swim at that level.

“Once I did it, I started crying (and) it was such a good experience,” Chloe said.

Chloe’s coach said he noticed a few other meets where she swam some of her best races.

“I feel that she had a couple really great breakout swims in December (2016) at Junior Nationals,” Shea said. “She finished second in the 200 IM as a 15-year-old, and that’s pretty impressive, with a time that would have qualified her to go to NCAA Division 1 Championships. She would have qualified now, at 15, for a meet that she’s not going to swim at for another three years.”

Shea says Chloe has a drive that pushes her to be so successful in swimming.

“She works very hard,” Shea said, “(and) hard work will beat talent every day if talent doesn’t work hard. I feel that she’s got talent and a really good work ethic to be a very great swimmer.”

Chloe’s mother, Alyssa, added the feeling she gets from watching her daughter compete is indescribable.

“Watching her face after an amazing swim will never get old,” Alyssa said. “She looks up at the scoreboard and smiles, then looks back down at her lane number, then back up on the board with a look that says, ‘Did I really just do that?’”

Yes, Granite Bay’s Chloe Clark really did just do that.