Students, teachers participate in March for Our Lives protest 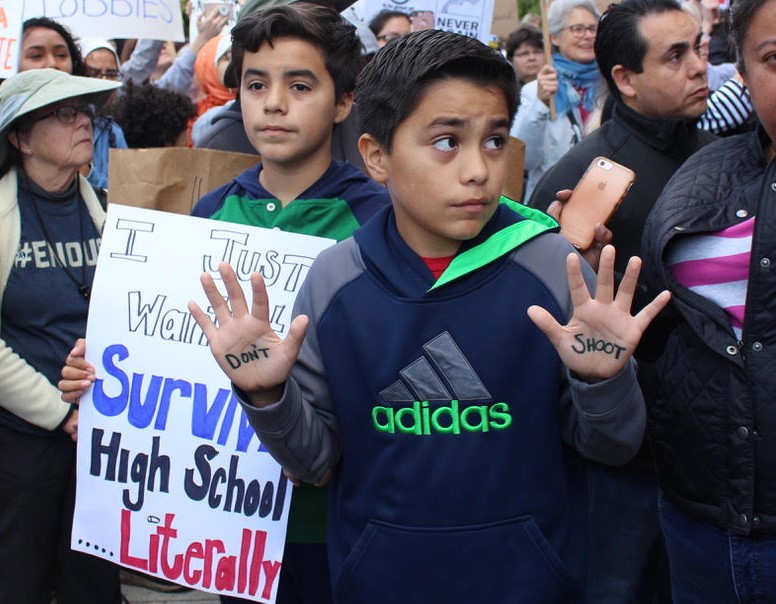 Two boys were among the hundreds of protesters at the California State Capitol during the March for Our Lives protests.

March 24 marked a unique day in U.S. history – millions of youths gathered across the country in what some believe to be the largest single-day protest ever, with an estimated 800,000 in attendance in Washington, D.C.

Thousands rallied together in Sacramento in an effort to encourage gun reform and safety after a deadly school shooting in Parkland, Florida, on Feb. 14 that killed 17 students at Marjory Stoneman Douglas High School. Schools across the U.S. have been on heightened alert as school shootings are becoming a norm.

Granite Bay High teachers and students helped organize a group of roughly 40 students, teachers and graduates to march for gun reform at the State Capitol.

“I think the cause is extremely important because gun violence affects so many families,” social science teacher and march attendee Jillyan McKinney said. “Everyone should feel safe in schools and everywhere else they go. This isn’t a partisan issue, this is an everyone issue.”

McKinney was a senior in high school at the time of the Columbine shooting, and she said that incident  changed her perspective on gun violence forever. McKinney knew she wanted to go into education – and Columbine, and events since, have shaped her views on school safety.

“At the beginning of my career, while teaching at another school, I was faced with an armed man on our campus who had just committed an armed robbery,” McKinney said. “He was using the school as a hiding place, and we were put into lockdown.

“I was eight-and-a-half months pregnant and found myself locked in a common planning center bathroom scared to death. I felt completely helpless and unprepared. I have never been the same since that moment.”

Since experiencing a non-drill lockdown early in her teaching career,  McKinney has ensured her students are aware of what to do in an emergency early in every school year.

“Many think that they are immune from gun violence, but it’s a topic that can’t be ignored any longer,” McKinney said. “It’s imperative to recognize that gun violence strikes all communities and deserves our attention.”

McKinney said her parents emphasized the importance of speaking out and using her voice for change during her youth.

“I have three kids, two of whom are in public school,” she said. “I have always known there are dangers that are associated with high school-aged kids, but after (the Sandy Hook shooting), that perspective shifted for me. I hate that I have to be scared to drop them off at school. School should be a place of learning and growth, not an institution of fear.”

The Sacramento event was organized by 17-year-old Emily Stone, who graduated from Independence High School in December and will attend University of San Francisco for political science in the fall.

“Our goal with the March was to raise awareness of not only the national gun violence issues but also the local ones, most recently the Stephon Clark shooting,” Stone said in a text message. “While this march was sparked by school shootings, we want to reduce all shootings.”

Although Stone was unable to personally attend the march because of a prior scheduled trip, she was impressed by the unity of those who participated.

“We had such a diverse attendance – all races, religions, genders (and) political parties were there, but they all came together to support the same thing, which I think is so important to our success,” Stone said. “I loved seeing how involved the youth was and how our generation has stepped up to the plate. … Kids are capable and determined to see change.”

As the mother of two children in public school and working in a school, Roseville High counselor Philomena Crone also chose to attend the march.

“I feel like my life’s passion is to keep kids safe, so I wanted to be out here to be in solidarity with people who are like-minded,” Crone said. “I want change. I want a multi-leveled system to keep our schools as safe as possible.”

“I never thought this would become an issue the way it has over recent years,” Angelone said.

While Angelone said her role as a teacher hasn’t necessarily changed in her 14 years of teaching, one thing has – the number of school shootings happening seemingly more and more frequently.

“What has changed is the increase in lockdowns, having to put a device on my door so I can lock it without being shot, having a bucket in my room so kids can pee if we are stuck inside for extended periods of time, having to have discussions with my students about how to barricade the door and having to think that it’s a possibility at any moment is what has changed,” Angelone said. “I still have the same responsibilities to provide the best education I can to my students, build relationships with them and prepare them for the future, but now I have the added fear that one day, we could be next to come face to face with a mass shooting.”

Angelone hopes her activism encourages students to speak out and stand up for change.

“I was impressed that the march was organized by kids,” Angelone said. “I loved that at the march, there were several people registering to vote. I want my students to know that democracy has to be an active thing in order for it to function the way it’s supposed to function.”

Angelone said she is not anti-2nd Amendment, but rather she hopes to keep students safe in school.

“What I am for is keeping our kids safe (by not) putting more guns on campuses,” Angelone said. “I don’t have all the answers, I just know something needs to change because enough is enough.”

Junior Jake McKillop attributes the rise in school shootings to a societal change.

“Mass school shooting were non-existent 25 years ago despite gun laws being way more relaxed,” McKillop said in a text message. “Every school shooter was somewhat of a social outcast or reject. A large majority have lived in a household without their biological father. A good percentage play violent video games. Statistics go on and on.”

“The only legislation I see to wield positive effects is even tighter background checks and the ban of bump stocks,” McKillop said. “I don’t really feel it reasonable for someone to have access to magazines that hold over 20 rounds, but it would be nearly impossible to regulate clips (or) magazines.”

“At the same time, I can’t fathom why the age limit may be increased to 21 nationally as a requirement to purchase a gun. If you can serve in the military at 18, then you should be able to buy a gun at 18.”

McKillop doesn’t see a clear-cut solution to violence, but instead he said American society must change as a whole.

“It’s of my opinion that negating the 2nd Amendment would just enable evil to manifest itself easier,” he said. “I believe guns in the possession of a responsible person do much more good than bad. In Switzerland, over a quarter of people have guns, yet the rate of annual deaths from firearms are nearly zero percent there … so I feel like the problem is more in relation to the people.”

“The UK does not permit guns freely, and the current controversy is knives. There are currently riots in the UK because of knife violence. When people intend to hurt others, they find a way.”

Many say harsher restrictions are necessary for a reduction in gun violence.

“I see the purpose of owning a gun as being a means of self defense – used responsibly, they’re a measure of protection,” McKillop said. “I think that more can be done to make sure that those who are mentally unstable don’t get guns, though at the same time, most shooters don’t get the weapon legally. … I don’t believe teachers should be forced to take arms. They’re teachers, not militants.”

Junior Bethany Brooding, who organized the GBHS campus walkout on March 14, attended the march in Sacramento as well. Brooding is heavily involved in local marches and protests, having attended the Women’s March and March for Science among others in the past.

“I noticed that there was definitely an older generation there, not only just parents but even some people who were probably in their 70s or higher,” Brooding said. “Not always, but statistically speaking, elderly people tend to vote more conservatively and have more Republican or conservative views, which doesn’t always line up with the issue of gun reform or control. So I was really surprised to see just  the demographic that was there.”

Brooding said such a large march allowed for greater news coverage and presence, so large participation was very important.

“You have to use your voice whether it be on a ballot or in the streets,” Angelone said. “If we just sit by and apathetically wait for things to change, we aren’t doing our jobs as citizens and are taking a risk in allowing our democracy to erode.”