Students shave their heads and raise donations for childhood cancer 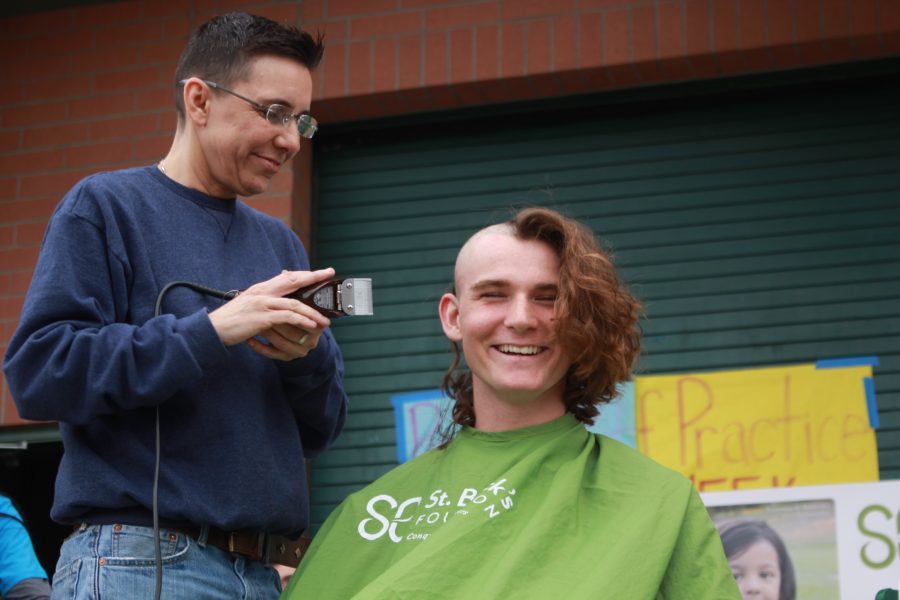 Who needs hair anyway? March 10, 2017 marked the day of the annual GBHS St. Baldrick’s event, aimed at shaving off the disastrous effects of childhood cancer.

Every year, the GBHS Gold Ribbon Cancer club organizes this event in the quad – a tradition that has been in place for several years.

All the proceeds from the fundraiser go to the St. Baldrick’s organization, which provides scientific researchers with the funding necessary to give childhood cancer patients the best treatment and future possible.

This year, juniors Candace Leung and Isabella Matthews lead the event as co-presidents of the Gold Ribbon Cancer club. Leung was inspired to assume such a high position in this club after seeing first-hand the effects of cancer on her sister’s best friend and previous GBHS valedictorian, Anina Hanlon.

“Anina had osteosarcoma when she was a younger child,” Leung said. “Thankfully, she’s in remission and she’s doing great, but meeting her and getting to know her really opened the door for me to see that this is a real issue (that) affects a lot of people across America and all around the world.”

Branching out on breast cancer

Hanlon’s touching story has led the club to greatness, fundraising around $6,500 for St. Baldrick’s this year, which exceeds their original $5,000 goal.

Much of this money came from the Jack’s Urban Eats fundraiser, where 20 percent of the restaurant’s profits that day were donated to this cancer-fighting foundation. $500 was raised by hungry and generous customers alone.

With the help of Andrew Phillips, physics and biology teacher, and his musical talents, $500 more was raised just by cash dropped in his guitar case.

Overall, the fundraiser topped the charts in terms of money raised and will definitely happen again next year, according to Leung.

The rest of the money came from the individual fundraising efforts of the shavees and volunteers as well as donations accepted on the day of the event.

“I just emailed all my mom’s friends,” Kring said. “I posted on Facebook.”

Many shavees, including Phillips, asked for donations via social media, taking advantage of the modern technological age.

In the end, Phillips individually raised $2,100 – more than any other shavee or volunteer this year. To Phillips and many others, however, shaving one’s head as opposed to just donating money holds a significance of its own.

“The idea of shaving our heads is to show solidarity with those who don’t have a choice about it,” Phillips said.

Kring shares Phillip’s passion for this cause and looks forward to shaving his head in many more years to come.

“I’ll hopefully do it every year,” Kring said.

Several participants in this year’s St. Baldrick’s event hope that their contribution will inspire their peers and classmates to think beyond physical beauty and make a small sacrifice that can impact the lives of thousands.

“I hope they (students) saw that there’s bigger things that we need to think about,” Kring said. “A lot of people are worried about their image … but none of that stuff matters when you think about it because there are a lot bigger things going on.”

Reflecting on this year’s St. Baldrick’s fundraiser and head-shaving extravaganza, the Gold Ribbon Club can’t help but look forward to the same or higher degree of success next year.

“It’s been a great year, and I can’t wait to do it again next year,” Leung said. “It’s going to be even better (next year).”