Students report that finance course is a good investment 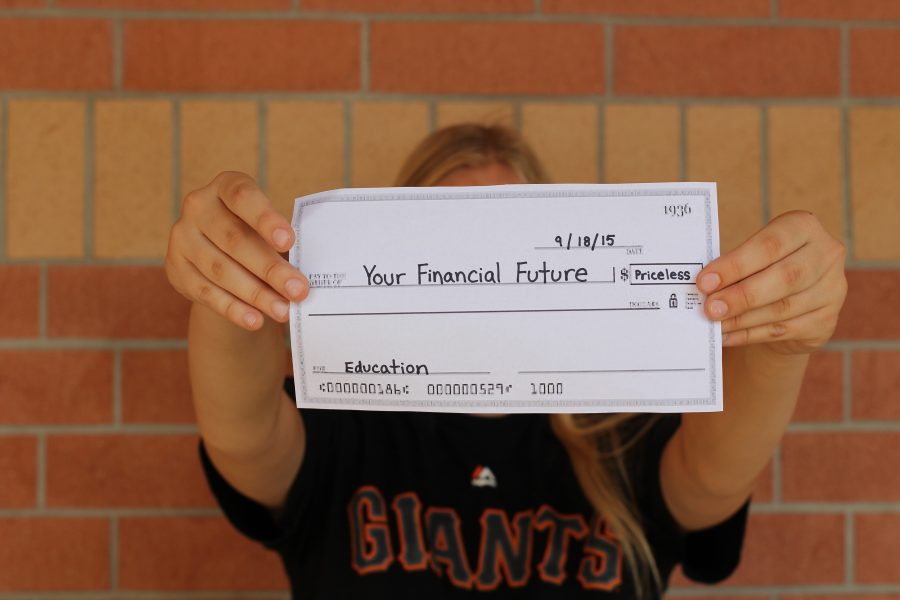 The online class aims to prepare students for their future financial endeavors. The class is 15 lessons

Why bother to take so much time earning a degree and getting good job with no idea what to do with the money?

Granite Bay High School aims to remove this question from the future of the 2016 senior class by requiring the completion of an online finance course through Blackboard in order to graduate.

“(The course should) expose every student to some basic ideas about how to manage (their) financial future,” Assistant Principal Mike Fischer said.

Fischer said the course, which has been well received by alumni and parents, provides great insight into the financial world for students.

The course contains 15 lessons broken into 4 units with a final exam at the end.

I think that there are some students who have had no exposure to what it is going to cost to (live alone)” College and Career Center Cindi Underwood said. “It really just depends on the home life and financial exposure they have had.”

Senior Ambreen Siddiqui, who has not yet begun the course, is skeptical of how useful the course will be, despite having very little exposure to finance in the past.

“I’m in Econ right now and that’s the closest(to financial education) I will get,” Siddiqui said.

Despite limited learning so far in her life on the topic of finance, Siddiqui said she thinks Economics class will prepare her well enough for the world.

“If I know how the economy works, then I will be able to function (fine) in my daily life,” Siddiqui said.

Underwood said different parenting styles and levels of involvement with students determined how valuable the course is to each individual.

Underwood said she suspects 60 to 70 percent of GBHS students have been sufficiently exposed to finance issues, but the rest of the student body are in need of the program.

According to administration, the course should take about 5-10 hours to complete.

Some students felt like the course was not promoted well enough, but Fischer said otherwise.

“We announced it to both seniors and juniors at the class meetings on the first day of school, and it was pointed out… at the senior class meeting in the theater,”Fischer said.

Despite this, Fischer acknowledges that some students will not know about the course and encourages seniors to spread the word.

Siddiqui said she does not know exactly what is on the course, but from what she has seen the time estimate seems reasonable.

While the percent of students with financial intelligence is better than in the past, Underwood said students need to be prepared for living alone of a college campus.

Underwood said one of the biggest obstacles college freshmen will deal with are credit card companies. The deals and bonuses which companies use to lure in unsuspecting teenagers can lead to debt if the student is not well educated.

Underwood’s own daughter had a similar experience with credit cards and now Underwood sees why it is so important for people to be educated.

Siddiqui said she thinks the sections on investment will be the ones which will be the most useful to her.

“The district is trying to make seniors more prepared,” Underwood said. “It is just being proactive.”