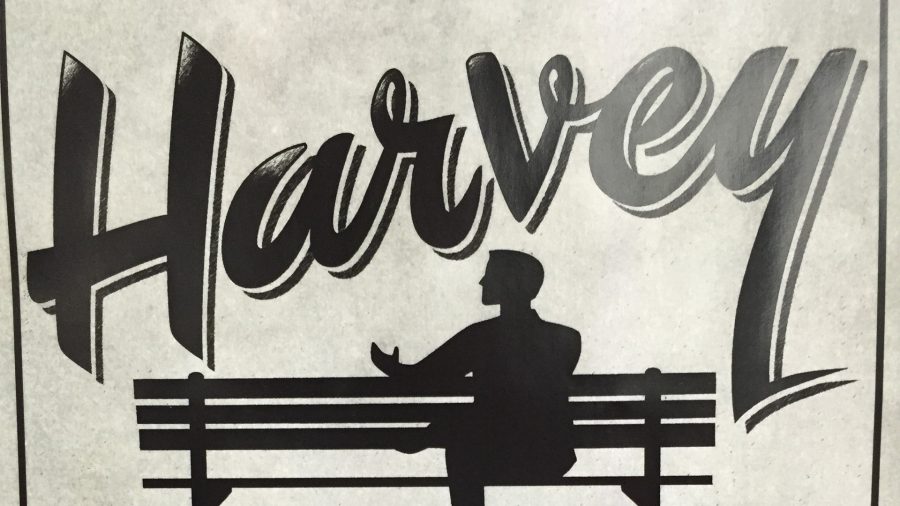 The start of winter brings with it the only student directed play Granite Bay High School will have
this year.

Jack Fish, Micky Frank and Kelli McTague, all seniors, are the three directors for the play Harvey, written by Mary Chase in 1940. This differs from the fall play and spring musical, in which Kyle Holmes serves as both director and producer.

“We get to direct it and so that means for blocking, which is like moving on the stage and acting direction, that’s all our direction. (Holmes) can put his input in but it’s basically up to us and we do costuming and public relations and all the lights and tech stuff like that. It’s a lot of work but so far it’s been going really, really well,” said McTague, who assistant directed this year’s fall play The Complete Works of William Shakespeare.

The winter plays each year are directed by seniors who have participated in the drama program at GBHS.

After two or more groups of seniors propose a play to GBHS teachers and administrators, a final choice is selected from the proposed ideas.

Student directed plays usually have smaller casts, a result of needing to be able to handle all the actors said McTague. She said things have been going better than she hoped for.

“They give me more respect than I really thought I was going to get,” said Fish, who had also anticipated
having difficulties directing.

Harvey is about a middle aged man, Elwood, who has an imaginary friend named Harvey – a six foot tall
white rabbit.

“I would say the play, in some areas, is over the top and funny. Holistically, it’s very comedic and it does
have more solemn and dramatic moments but overall, it’s just very funny and it’s family-friendly,” Fish said.

Fish is currently in pro drama and has participated in several GBHS productions.

While on the surface Harvey may seem like a lighthearted play, it can take on deeper meanings, said
McTague.

“You can take this play two ways. Either take it that this is a play about mental illness and he has a mental illness which is why he sees Harvey, or take it as Harvey is real. The main theme of the play is basically be accepting because in the 1940’s. It shows that you should accept people for who they are and don’t try to change them,” said McTague.

Harvey, identical to last year’s winter play The Laramie Project, will place the audience on the stage with
the actors. The actors will have three sides exposed to the audience.

“The audience will be onstage and surrounding the stage three quarters of the way. It’s a more modern interpretation to theater, especially because it’s an older play. It’s bringing new life to it. You’ll really connect with the actors because there’s a special connection when you’re that close and all the actors are extremely talented,” said McTague.

Fish said he agreed with McTague.

“I think it’s more fun because when the audience is very close to the actors, you feel like you’re in (the play) more,” Fish said. “It makes it more intimate.”

The lead roles for Harvey have been taken on by underclassmen, which is generally uncommon.

“We have a very young cast but that is just because they’re awesome and I’m very excited about it,” said
McTague.

He said that they tried to cast the parts as best they could, and were happy to give underclass
experience.

Elwood, the main character, is being played by Evan McGuire, a GBHS sophomore.

McGuire said he was both surprised and happy when he found out he had gotten the lead, his first major role
in a GBHS production. He was in Shrek the Musical and has also acted at community theaters.

“I’m nervous about getting my lines down. I’ve never really been good at that. If I can get my lines down I’ll be confident,” said McGuire.

“I play Veta Louise Simmons. Her character is Elwood’s sister. She is an old lady who is very proper and
dramatic and theatrical,” said Brubaker.

This is her first acting role at GBHS.

“I’m looking forward to working with everybody and the dress rehearsals and the actual shows and the excitement of all of it,” said Brubaker.

She said she is also excited to be acting in the student directed play and hopes to learn a lot from this experience.

The cast and crew said they were all excited for the play to begin and cannot wait to perform after all the
planning and hard work they have put into perfecting their performance.

“Every day of working on this production, we gain more confidence in our characters and the show itself,” Brubaker said. “I am so honored to be a part of the cast.”