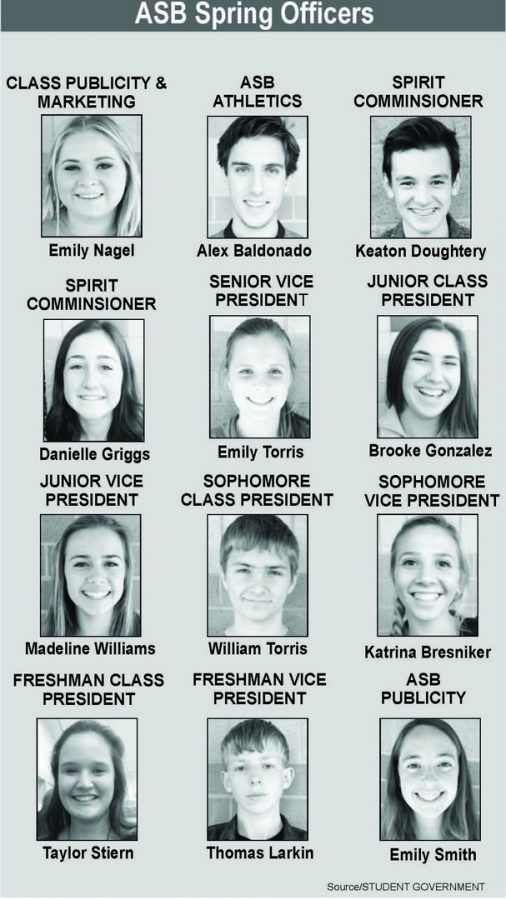 This year at Granite Bay High School, the candidates for student government elections are scarce. With only one student running in each category, and some being preselected last year, the number of positions on the ballot will be few. The lack of participation in the student government election has prompted many to question motivation to run for office within the
student body.

“I think that a lot of kids don’t think that they can change their schedules to do student government in the spring,” Givens said.

“Also kids think that you need a lot of experience which only a few jobs require.” Givens said.

“I think we could definitely publicize better,” Givens said. “Grizzly Chat is something new that we have started.” Grizzly Chat is when a student government representative comes to each second-period classroom to get feedback on school events and get ideas on how to improve
the campus. It’s a new addition that Givens said she thinks will help everyone have a voice.

Taylor Steirn, running in the student government election, will be the freshman class president for spring 2015.

“Some people will think it’s a lot of work or time … but I think it will be fun,” Steirn said.

Thomas Larkin will be this spring term’s freshman vice president. “A lot of people think that if they want to do student government that they can only do it in the fall,” Larkin said. “People don’t realize that you can change your schedule.”

William Torris will be the sophomore class president. He said he thinks people’s different preferences determine when they run for office.

Sophomores Keaton Dougherty and Danielle Griggs will be the spirit commissioners for the spring 2015 term. Griggs said she attributes the lack of participation to sporting schedules.

“Many school sports take place in the spring (so) people don’t have a lot of time to do student
government,” Griggs said.

Madeline Williams will be the junior vice president and said she hopes there is no particular reason for the lack of participation.

Williams is running because she said she wants to be more involved with the activities on campus.

“I want to be more involved in the school and hear what all of the classes have to say and give them an opinion,” Williams said.

“We already have such great school spirit, it’s just a matter of keeping that up. I really hope to reach out to the junior class as a whole and hear what everyone has to say. Not only do I want to be more involved with the school, but I want others to know that they can be too.” Williams said.

Williams also said she believes the elections are a really great process. “I think people should just try,” Williams said. “I did it just to see.”

Williams said she thinks elections are a positive school event, regardless of the outcome. “The election process itself is a good experience,” Williams said.

“If you don’t win, it will still be beneficial.” Emily Smith will be the publicity and marketing commissioner this coming term.

“The spring term is not as advertised with its fun events,” Smith said.

“This year we have Talent Show, Day at the Bay and Quad Dance, so I don’t see why more
people don’t want to run.” Smith said.

Alex Baldonado will be the athletic commissioner for the second time. He said he attributes the lack of interest in student government elections to the hectic nature of November.

Baldonado also said people are unaware of the elections, so they don’t run.

Emily Torris will be the senior vice president for the spring term. Torris said that there are some really important jobs that need filled in the spring, but there is a lack of knowledge about elections.