Stolen lunches cause frustration among students and administration 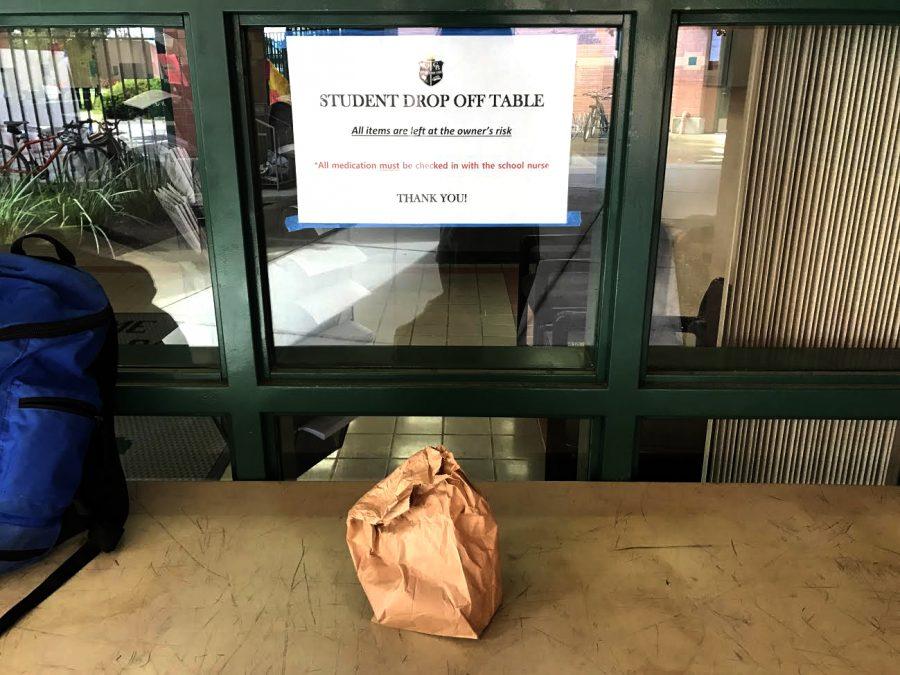 Several Granite Bay High students have recently had their lunches stolen from the drop-off table at the front entrance to the campus.

The table is there for parents to leave students lunches or items that they forgot or need brought to school.

Thieves have taken advantage of the table not being closely monitored by taking items that were dropped off for other students.

“I have had my lunch (taken) on several occasions, and I think the quality of my lunches is what causes me to repeatedly fall victim to this epidemic,” said Claire Briare, a GBHS senior.

Many students have been questioning the motives of the unknown people stealing from the table.

“I think people are taking lunches because they think it’s funny and see it as a free good meal that they can brag to their friends about taking,” said Sydney Sampson, a GBHS senior who recently had her lunch from Subway stolen.

Before there was a drop off table, GBHS staff members in the front office used to collect and then monitor what parents dropped off for their students.

But that system was overwhelming staffers, and so the unmonitored table was set up outside.

“The previous drop-off system created clutter and disruption for the office front desk, so the school had a (legitimate)  reason for moving the drop-off table outside,” Briare said.

Employees Amy Rehwald and Janay Hood at the front desk have other jobs to do besides watching students belongings, which is why the change happened.

“This is the third school I have worked at, and I have never been at a school where they were able to facilitate deliveries to kids or supervision of kids’ belongings, especially when you have 2,000 students,” assistant principal Jessup McGregor said. “The two people inside (at the front desk) have jobs that they have to do besides just greeting people – like overseeing transportation, counseling stuff and transcript request.”

McGregor said he believes students should be taking responsibility for bringing their own lunches and not forgetting things. However, he said he does think students should report the incident if it happens to them.

“(If a student reports it), the assistant principals can at least know what happened and whose it was and we can look for patterns and try to find a way we can address it,” McGregor said.

Some students have been trying different tactics to get around others taking their lunches before they can.

“I would recommend that when (students) have their lunch dropped off, to pick it up immediately so that way it doesn’t sit on the table long enough for it to get stolen,” Sampson said.

Others have even tried making their lunches look less appealing or making it look like it is not even a lunch so their items do not get taken.

“The key to a successful lunch drop off is to trick the snakes,” Briare said. “I suggest disguising the food as something less appetizing, and personally I like to place the food in a brown bag and write something like ‘lax socks’ or ‘baseball glove.’”