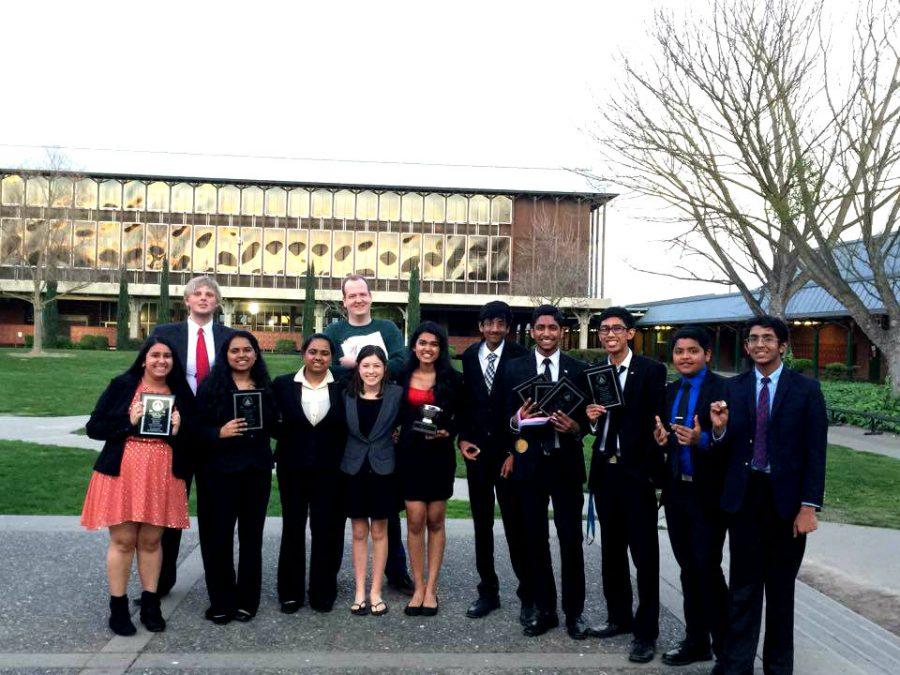 Contrary to popular belief, Granite Bay high school’s Speech and Debate and Future Business Leaders of America teams do more than just talk and talk – they win too.

The past few months have been pivotal moments for the two teams, as they have successfully passed to States and National qualifiers.

The Speech and Debate team has had a busy year, with a successful league season in the fall. During the spring term, the team participates in invitational and qualifying tournaments.

Sumana Kaluvai is a senior captain on the Speech and Debate team, and has attended numerous tournaments in the past years.

“Recently we did state quals and then we had the national qualifying state tournament at state quals,” Kaluvai said. “I qualified for Lincoln Douglas debate and was the next qualifier for extemporaneous speech. I also recied a district wide oratorical cup.”

Kaluvai attended national qualifiers where she participated in policy debate.

Lincoln Douglas debates are centered around morality and ethical principles. This year the team debated the resolution regarding whether food security is the duty of a just government.

Extemporaneous speeches, on the other hand, are centered around current affairs and politics.

“We’re given 30 minutes to prepare for a seven minute speech,” Kaluvai said.

The team prepares for the speeches by keeping track of current events.

Kaluvai plans on continuing with debate after high school.

“A lot of colleges have debate teams,” Kaluvai said. “I plan on trying them out (to) see if I like it.”

Juniors Shivani and Arthi Bobbala have also attended most of the league tournaments this year.

“I went undefeated at the first league tournament which was a great start to the season, and qualified for states this year which is really exciting,” junior Arthi Bobbala said.

Bobbala prefers debate because she finds it more exhilarating.

“In speech it’s just memorizing. However in debate you learn the spontaneous nature of it which makes it more thrilling,” Bobbala said.

This is why Bobbala says she prefers extemporaneous speeches.

“I really enjoy researching resolutions because you become more aware of the world around you,” Bobbala said. “It definitely makes you more knowledgeable, I think that it’s important not to be ignorant.”

Bobbala plans to continue debate in college with her sister as a partner.

“I love competing and I don’t think I’ll ever get tired of it,” Bobbala said.

Vinith Somanchi is a senior and captain on the Speech and Debate team, and has successfully made it to both states and nationals.

“I broke in Lincoln Douglas debate for states,” Somanchi said. “I think it would be really awesome if I broke again.”

Speech and Debate team members also say they enjoy the friendships they form through the team.

“My favorite part of competing is supporting my team mates. We all help each other out and I love watching them succeed” Bobbala said.

“When our school wins, it proves that our hard work is paying off,” Bobbala said. “Tournaments might be long and exhausting but in the end they are beyond rewarding”.

Participating in Speech and Debate is not just an elective or leisure activity, but it also develops life skills that will help the team members in various ways.

“ I have grown so much since I have been on this team,” Bobbala said. “I have not only gained more knowledge, but I have gained the confidence I need to effectively express my ideas. Being on this team has not only taught me how to win, but also how to deal with loss and failure.”
Bobbala believes that failures can hold you down and can be used as motivations to succeed.
“With hard work, determination, I realized that I could achieve pretty much anything that I set my mind to,” Bobbala said.

Granite Bay’s FBLA team also had a successful season, with most of the members making it to states.

“About a month ago we went to Susanville to participate in the northern sections competition,” said senior Bradley Chee, co-president of FBLA. “We competed against schools from Northern California.”

“(A lot of) members came home with plaques,” senior Karim Sharif said, also a co-president of the club.

According to junior Chris Reyes, the team is going to states because they placed in the top three.

“We take a test on any given concept,” Chee said. “If we make it in the top five we get to move on to states”

However, not all the tests are business related.

“I  got first in computer problem solving and third in cyber security,” Chee said.

“As a chapter we got second in sweepstakes, the best we have ever done,” Chee said.

Sweepstakes in an award given to each school based on how many plaques the team received as a whole.

“It’s the best we have ever done. We hope to do even better in the years to come,” Chee and Sharif said.

Sona Jeswani, a co-president on the team, participates in Economics and personal finance.

“I got fourth in both events and qualified for the state conference in Santa Clara,”  Jeswani said.

For Jeswani, attending tournaments is a great way to meet new people with similar interests.

“When I went to Nationals last year, I was able to network with students across the country while learning more about leadership and business,”  Jeswani said.  “Being in FBLA for 3 years has truly helped me grow as a person.  I have developed a passion for leadership and service.”