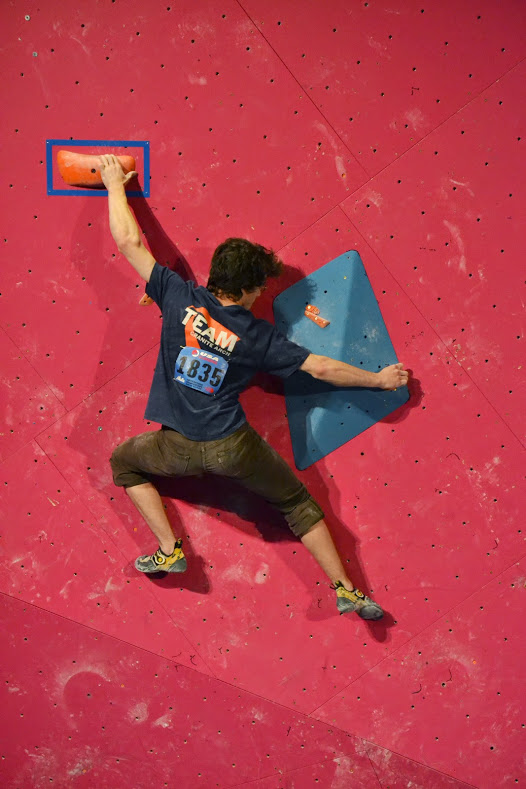 When one thinks of typical high school athletics, they think of football or soccer or basketball, but never rock climbing.

Granite Bay High School senior, Joseph Diaz defies that stereotype. Diaz, climbs competitively and has qualified for the World Championships in Arco, Italy where he will be part of team U.S.A., competing in the bouldering competition.

Diaz finished in second place in the USAC American Bouldering Series in Madison, Wisconsin last February, qualifying him as one of four Americans to represent team U.S.A. in Arco, Italy.

Where many high school athletes choose the more common sports, Diaz found a love for climbing when he was a child and has continued with the sport ever since.

Diaz fell in love with sport when he would be the only kid at birthday parties to climb to the top, ultimately kindling the fire that fuels his motivation and passion for rock climbing.

Diaz was nine years old when he began climbing – his love for climbing and his competitive attitude propelled him to stick with the sport and get him to where he is now.

For most people, the rules of competitive rock climbing are virtually unknown. In Diaz’s category, all climbers stand with their backs to the wall as a climber goes up the wall. The winners are determined by who gets the highest up the wall in the allotted time period.

Differing from many typical high school athletes, Diaz does not have the support of friends and family coming out to watch his competitions. Despite the isolation of competitive rock climbing, Diaz enjoys it.

Although he likes not having students from high school come watch, Diaz does like hearing a crowd as he climbs. Diaz admits it is exciting to climb in front loud crowds made up of hundreds of spectators watching the competition.

Despite hearing the roar of the crowd, Diaz said his mind empties when he climbs-solely focused on the task at hand.

“I’m not really thinking much (when I climb),” Diaz said. “I don’t think of the stress of what goes.”

Diaz said his family has been very supportive and were the original reason why he started competitive climbing. His cousins rock climbed and both of his parents were competitive gymnasts. His parents said they also valued high school athletics and wanted their son to get involved in sports.

“When he was growing up, we would see he had a proclivity for climbing. He would climb 60 foot trees on our property,” his father, James Diaz, said.

His parents both liked him being active but were scared by the unsafety of Joseph climbing trees in the backyard.

“We enrolled him in a gymnastics class and he didn’t like it.” James said. “He had been climbing at birthday parties at this club…and we entered him in the youth program here and was drafted onto the team he is on now.”

Joseph said his ultimate goal in rock climbing would be to win the World Championships. He had regionals qualifier May 9th for another type of competitive rock climbing that is more focused on pace and height of the climber.

After this year, Joseph Diaz will have to join the open division in the sport where the professional climbers compete because he will age out of his current division. After the World Championships, Joseph has set his sights on taking his rock climbing career to new heights.

Even though Joseph strives to become a professional rock climber, he admits that the sport is just for fun.

“In professional rock climbing, you don’t get any money,” Diaz said. “I’m working on sponsorships right now just to go to (the World Championships).”

Granite Arch Climbing Center is also having a fundraiser at their facility Friday, May 15.

If Joseph qualifies for the World Championships in the other type of rock climbing, then the Diaz family will stay in Italy for a full week as Joseph climbs in competitions two weekends in a row.

In preparation for these competitions, along with all his others, Joseph practices at multiple facilities in the area. The first of the two, the Granite Arch Climbing Center, is located off of Highway 50 in Folsom and has walls that are smaller than Pipe Works gym, Joseph’s other facility he trains at in Sacramento. The walls at the World Championships are about 65 feet, according to Joseph, and the bouldering walls will also be much higher than the ones he practices on in Folsom.

A typical practice for Joseph is to work-out aerobically for half an hour and then climb for two hours.

Despite taking place 60 feet into the air, the sport doesn’t elicit severe injuries like concussions or broken bones that are common with other sports. The worst injury Joseph has experienced is a twisted ankle.

Even though Joseph refers to injuries as a rarity, an avid rock climber’s hands are typically very calloused and cut up from the wall. Joseph, among others, wear tape to cover and protect their knuckles while climbing.

James Diaz said besides partaking in climbing, he also likes being a part of the community that is formed around his son’s sport.

Joseph said he climbs with professionals in the open division and despite the age gap and level differentiation, as a whole the rock climbing community is very close.

Although rock climbing has not been admitted as an official Olympic sport, it has potential to do so in the future. It was indicated to be a category in the 2020 Olympics but was later dropped from the list of competitions.

“The earliest possible it will be (in the Olympics) is 2024,” James Diaz said. “The U.S.A. Climbing Association is trying to make it more mainstream by making the rules consistent throughout the world (because) right now there are different rules internationally and in the U.S.”

Once there are set rules for the competitive rock climbing world, the Olympic committee will hopefully identify rock climbing as a legitimate possibility and may include it in their quadrennial games.

As for Joseph, whether it’s an Olympic sport or not, he will enjoy the sport competitively and recreationally.

Joseph has come a long way to where he is now and finally has the chance to prove himself on the sports biggest stage.

To his father; however, he will always remember his son’s first competitions and the feeling he got when his son climbed.

“I wasn’t afraid so much that he was going to fall,” James Diaz said, “I just wanted to make sure he never gave up – and he never did.”