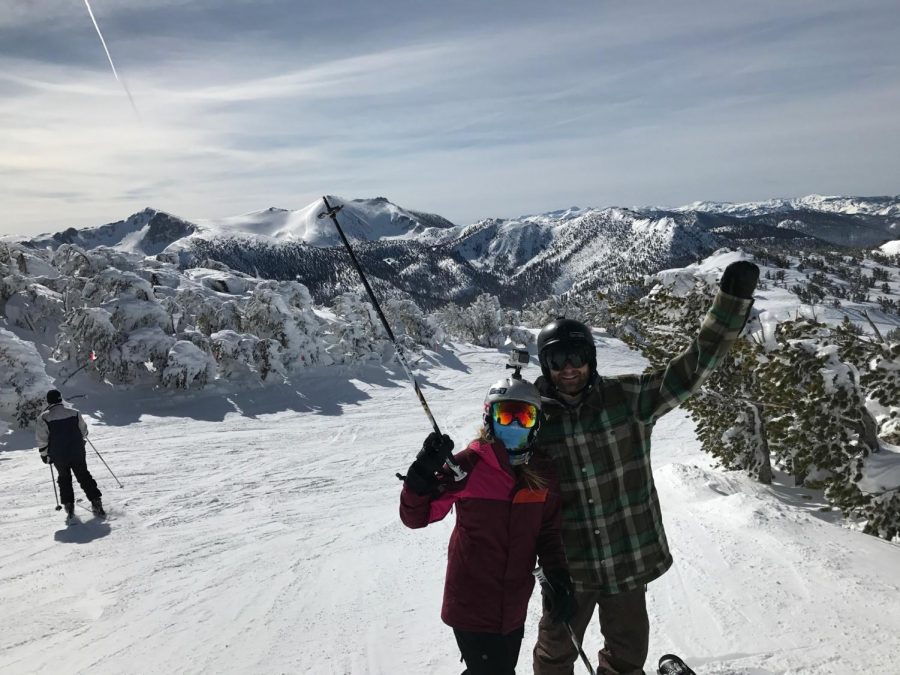 Special to the gazette/ Coons family

Senior Hannah Coons and her brother enjoy a day on the slopes.

A cold white sea floods the mountain, submerging everything in its path in a thick powder. The icy sting of the wind whips through the air as the lifts begin to operate, moving up the hill. The temperature is freezing, and a frost coats the trees: it’s a perfect day to shred.

Winter weekend trips to Tahoe to ski and snowboard are a typical getaway for many students at Granite Bay High. But while these winter sports provide an entertaining athletic outlet, students’ preference on whether skiing or snowboarding ranks higher differs.

“My dad taught me (how to ski) around the age of four or five,” Coons said. “I go to Colorado every winter to ski at Breckenridge and Vail.”

With years of added experience, Coons accomplished the feat of Peak 8, a double black diamond slope at Breckenridge considered expert by the ski community.

“I have hiked Peak 8 which was dope,” Coons said.

On the flip-side of the winter sports spectrum, many students snowboard during the winter.

“I love being out in the woods, and when it’s snowing I like that you can have a bunch of people come out and shred with you” Sanderson said. “It’s just a good time and it’s a lot of fun.”

Last year, Sanderson and a large group of friends were able to take a trip together and snowboard as a group.

“Last winter me and like fifteen other dudes went up and we stayed in a cabin and snowboarded all day,” Sanderson said. “It was just the most fun I’ve had.”

While some students enjoy a select sport, others enjoy the challenges that both snowboarding and skiing encompass.

During the snow season, senior Laine Sorgea is a dual athlete, often traveling to nearby Tahoe resorts Northstar and Squaw.

“I have been skiing for probably ten years,” Sorgea said. “I started snowboarding two years ago.”

Sorgea often returns to her roots to ski, snowboarding only to change things up.

“I actually ski mostly,” Sorgea said. “I like skiing because it’s a challenging sport that’s different than everything else. Snowboarding is just when I get bored of skiing.”

For many, snowboarding is more difficult to learn than skiing, due to the added barrier of being strapped onto a single board.

“I tried snowboarding once but I just couldn’t get the hang of it,” Coons said. “I kept falling on my butt and the next day I went right back to skiing.”

Like Coons, Sorgea also believes snowboarding was difficult to learn.

“Snowboarding (was harder to learn),” Sorgea said. “It felt less natural to have your feet on one board rather than two.”

Similar to Sanderson, Sorgea also loves the social side of ski and snowboard trips.

“My favorite memory is going up with all of my friends last year the day after Winterball,” Sorgea said.

Though students’ opinions may be divided over which sport is their favorite, everyone can agree that snowboarding and skiing are two fun sports to look forward to each winter.

“The best feeling is when you wake up in the morning and there is at least a foot of power outside because you know it will be a fun day,” said Coons.