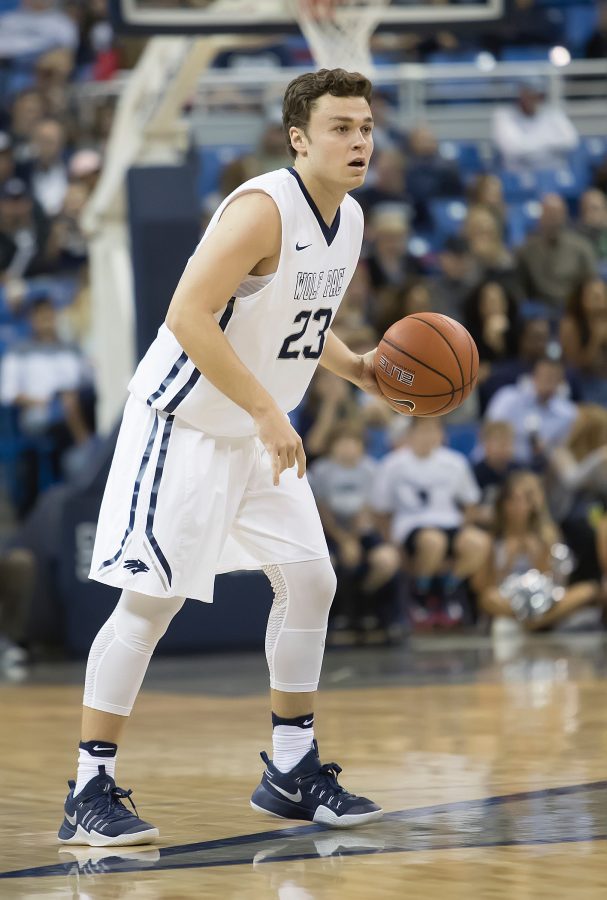 Many Granite Bay High School graduates  are continuing their education and athletic career in top-tier colleges around the country.

Becoming a college athlete  is becoming a  more popular goal for high school athletes and more are striving to get recruited and test themselves in the world of collegiate sports.

One such athlete, in his first basketball season at the University of Nevada, Reno, is Charlie Tooley.

In his career at GBHS, Tooley was a first team All-Sierra Foothill League selection three years in a row. He not only averaged 16.4 points and 5.5 assists per game in his senior season, he also holds the GBHS men’s basketball all-time scoring record with 1,169 total career points.

“The speed of the game is a lot different, faster, and requires more attention to detail,” Tooley said.

In maybe his most influential highlight of the season so far, Tooley kickstarted one of the most thrilling comeback games ever in college basketball.

One of only two true freshmen at Nevada this season, Tooley sank a pull-up 3-pointer off a fast break, to help start an 18-4 run for the Wolfpack against the University of New Mexico with just over a minute remaining in regulation. Nevada had tied  the game just before Tooley challenged New Mexico’s final shot – the Lobos failed to convert the basket, and that sent the game to overtime. The Wolfpack won the game in overtime.

“It was the most insane game I’ve ever been apart of,” Tooley said, and a moment he will never forget.

Tooley is one of many recent GBHS graduates who is experiencing college sports this year.

“If  students have the opportunity to play in college, then they should take that chance and run with it,”  Tooley said.

Last year, 23 GBHS students signed letters of intent for college sports in February and November, with many more athletes committing later in the year.

Being a part of a team in college is mentally and physically difficult, Tooley said, but it builds lifelong relationships and experiences that outweigh the occasional exhaustion.

“The conditioning and practices are a lot harder,” said Tooley, but the experience is rewarding.

Carlin Isaacson, who graduated last May, is now Villanova’s lacrosse team. She committed to Villanova in her sophomore year in high school – most high school athletes don’t commit until their junior or senior years.

“In high school there are typically a few players that stand out by a longshot,” Isaacson said, “but in college, everyone is good.”

With lacrosse season just around the corner, she is excited to play her first league games after weeks of practice and tournaments. Playing on a well-known team against schools that she used to watch on TV is a crazy and rewarding experience, Isaacson said.

As for her older sister Carlin?

Lacrosse in college “gives me something to focus on and keeps me in shape,” she said, “and gives me a great group of girls for support.”