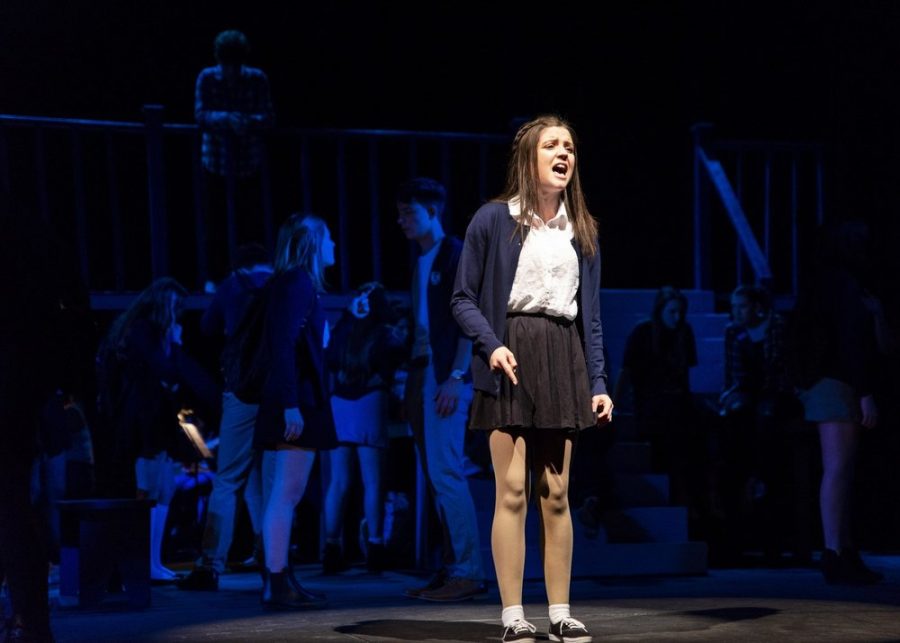 Almost everyone is familiar with the college scandal that broke out early in the year involving Rick Singer, a former college counselor in the Sacramento area that worked with past Granite Bay students.

When the news came out, it was perfectly timed with the premiere of Granite Bay High School’s new musical – Ranked. The coincidence has left everybody shocked on how close the show’s plot was to the headlines of wealthy people bribing the whole admission process.

“ It was crazy to see the musical we were doing literally come to life in the media,” said Grace Putman, who played Grace in Ranked. “It was crazy because people kept saying that the plot line of a student having parents pay for ranks was too much of a stretch but then it actually happened.”

The plot revolves around the identity crisis and pressures students face when trying to fit in in a school structured off of number that defines your value. In the play, parents paid for their students ranks so they can uphold their ego and status.

GBHS is known as a higher academically achieving school in the Roseville area so the message created by the theatre students resonated with a lot more people than they thought.

“I don’t think the intention was to get it big but we wanted students around our area (and all over the country) to know that their experiences and their voices matter,” said Alumni Chloe Boyan, who played Alexis in Ranked. “I feel like a lot of us already knew that there were plenty of ways to unfairly get into college through financial advantages but it was very powerful that our musical was an artistic expression of all the problems that were recently coming to surface to the public eye.”

The first words for the musical was actually drafted back in May of 2018. None of this would’ve happened if it wasn’t for the collaboration between the Director of Theatre Arts at Granite Bay, Kyle Holmes, and musical director, David Taylor Gomes.

“For our spring Musical Theatre class, (David) comes in two or three days a week and teaches everyone how to sing well and then, I do (teach) all of the acting,” said Holmes. “We’ll bring in choreographers sometimes. So that’s how we got where we are.”

Since the coincidence, it has helped with the publicity front for the musical’s future endeavors. So far, it has shown at the Crest Theatre, Ground and Theatre Festival at UC Davis, and is destined to premier nationally.

However, this isn’t the end of the journey. Just a few days ago, a twenty-thousand dollar fundraiser has just closed for Ranked to record a concept album in hopes of continuing to publicize its music and raise funds for their dream destination: Broadway in New York. A few alumnis from Granite Bay, like Boyan, would be contributing to this effort.

“First weekend of December, we’re recording a concept album with a good chunk of the music from the show. In March, we’re in the early stages of putting together an industry reading in New York City. We hire all of these people and they cast the show for Broadway actors and actresses,” Holmes said.

The future for Ranked might be long and unpredictable but the story that the musical holds is enough motivation for the program to keep on pushing forward.

“After a week of rehearsal for the industry reading, we rent a space along Broadway and invite a bunch of producers. We perform the staged version of the show and hope someone likes it enough to pay for a regional production of it… then maybe take it to Seattle or some other market. If that goes well, hopefully New York City would be next,” Holmes said. “We are learning so much every single day. We don’t know the answers to every question but we’re fortunate of everyone that’s guiding us.”

No matter what the end goal might be, there’s something more valuable than fame or attention to the theatre program that they wouldn’t give up no matter what.

“None of this (media attention) was a goal. We wanted to write a musical that was relevant and meaningful to our students, that mattered to them, that they could feel a lot of pride in… Through this whole process, I hope my students realize that art matters.” Holmes said. “There’s people crying in the audience because we made something from [my students] words. That’s a lesson that is going to stay with them forever.”