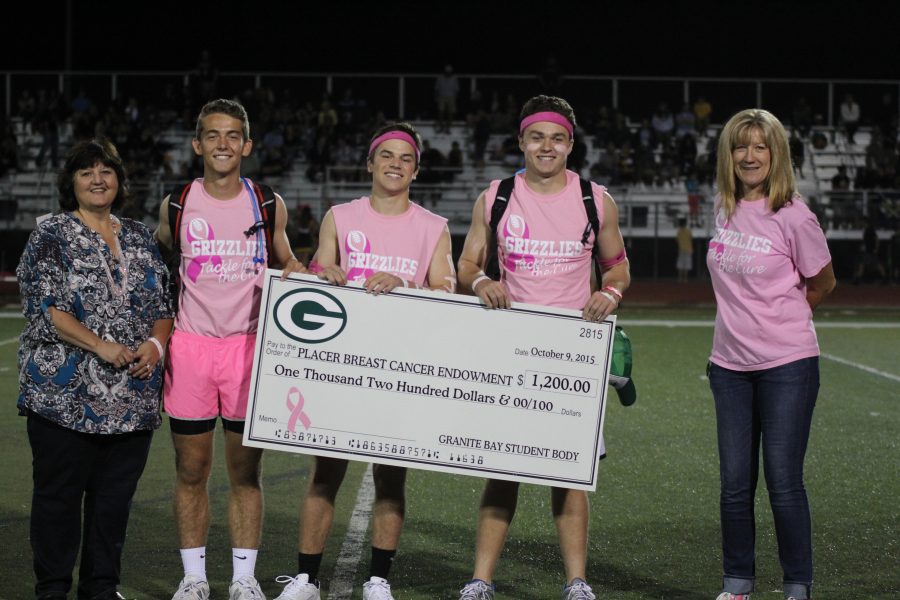 With October underway, pink is definitely a color of the month.

With Tackle for the Cure put on by the GBHS football team, and Dig Pink put on the the GBHS Girls Volleyball team, Granite Bay certainly is aware of Breast Cancer.

Football’s Tackle for the Cure happened on October 9th and was definitely an event to remember.

Varsity captain of the GBHS football team, Ryan MacIntosh said that the event was particularly beneficial to raising awareness this year.

For every pink clothing item that a player wore, they donated $2 to the Placer Breast Cancer Endowment.

“Every game I wear a pink band under my sock, even when it’s not October,”  MacIntosh said.

The Tribe also helps support the cause at Tackle for the Cure.  Everyone in the Tribe wore pink to support and raise awareness for Breast Cancer as well.

Also on campus, Breast Cancer awareness bracelets were sold throughout the week before the Tackle for a Cure game, which resulted in a multitude of students sporting this accessory at the game.

The girls Volleyball team also has an event for arise some support for the Placer Breast Cancer Endowment.

During Dig Pink, the team has many raffle prizes, as well as free food and barbeque.

GBHS Senior and varsity volleyball captain, Emily Demure, said that the event is a great way to help raise awareness for Breast Cancer.

“It reiterates into people’s minds that breast cancer isn’t just something you occasionally hear about, but something that affects many people and the people around them,”  Demure said.

The Volleyball team also wears their “Dig Pink” T-shirts throughout the entire month of October to raise awareness.

“Dig Pink is a very big event for the team, we raise lots of money for the Placer Breast Cancer Endowment and it generates even more awareness,” Plummer said.

Plummer said that during the event there are lots of fun raffles and games going on for the fans, as well as free food along with the snack bar.

“Our amazing boosters program takes on the role of organizing the event and it always turns out great,” Plummer said.

Last year, the GBHS volleyball program generated over $14000 in donations and fundraised money for the Placer Breast Cancer Endowment.

“The girls all wear their Dig Pink shirts and socks and it is makes the night really fun,” Plummer said.

Both programs have raised a significant amount of money for the same cause, the Placer Breast Cancer Endowment.

This foundation has raised over $1.5 million since their opening in July, 2005.

Granite Bay High School is one of many places that assists in the awareness and donations for the cause.

“Breast cancer affects millions of women and their families and this event is a small way to help fund research and treatment,” Plummer said.