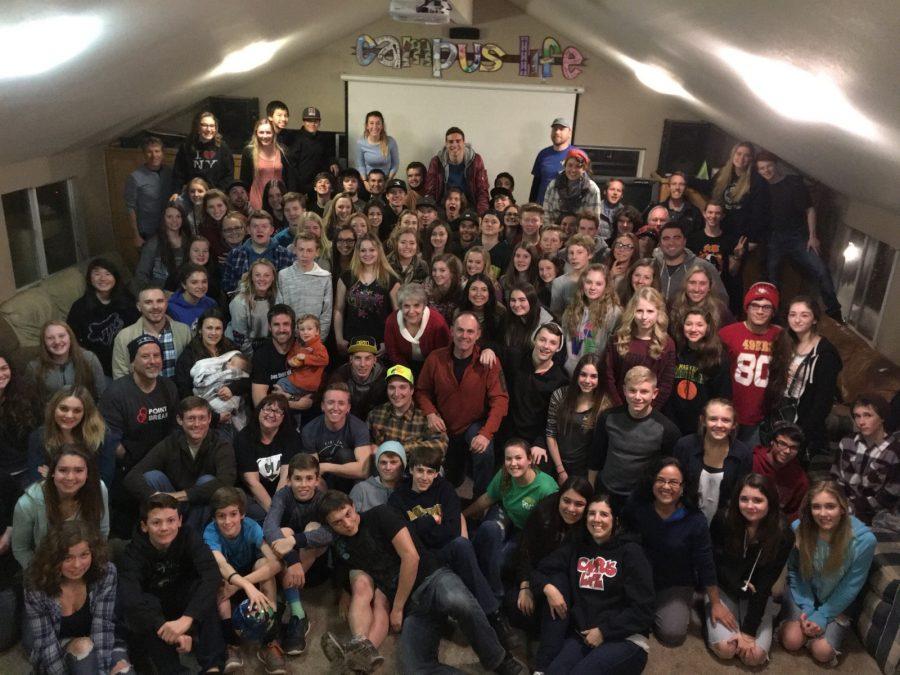 Dating back to 1802, the idea of a separation of church and state can be contributed to Thomas Jefferson, who wrote about it in a centuries-old letter to a group associated with another, different religious group. Although this separation is not guaranteed in the Constitution, it is a guaranteed assurance which took root in a clause issued by the Supreme Court after their ruling in Everson v. Board of Education.

It may be confusing for students then, specifically those at Granite Bay High School, to distinguish why Campus Life, a non-denominational national faith-affiliated organization which is in over one thousand schools, is given access to a public high school campus. Whether seen at lunch on Thursdays sitting at a bannered Campus Life table or intentionally invited by the school district to talk to struggling students, Campus Life has a long history of appearing on the GBHS campus, but in more cases and for more reasons than might be initially thought.

“In my time at Granite Bay (High School), we chaperoned the dances, the freshmen class – even to this year – builds their float at my house and when bad things happen, the school calls us,” said Rob Maxey, Campus Life’s Executive Director of Youth for Christ Ministries in Sacramento. “The principal … will call and say ‘Hey, we’ve got some kids that are in trouble, could you help? (Or) we have a kid that has attempted suicide, … would you reach out to the family and connect with them? (Or) … we have a kid that has committed suicide, would you consider doing the candle light vigil?’ So we’ve really been intricately engaged with Granite Bay for the last 20 years.”

Although many students were under the misconception that Campus Life is affiliated with Bayside, the organization is not related to any one church. Young Life, another Christian-affiliated youth organization has similar goals and similar means in which they accomplish these goals, but is a separate entity from Campus Life.

In regards to the significance of religion in the organization, according to Maxey, the faith component is always optional. In general, Campus Life focuses on character, confidence, responsibility and, as an optional component, faith.

Overall, a large aspect of Campus Life’s goal as a national organization is community outreach and betterment.

“(For) a lot of the underserved kids at (local) schools, we figure out how to pay their life bills,” Maxey said. “We help coach the basketball team at Adelante and buy the kids’ shoes because people can’t afford them. We’re faith-based, (but) we’re not footing bibles in people’s shoes when we give them. When a kid gets suspended or expelled from Granite Bay and they go to the district office, I go as an advocate and sit in on the expulsion hearings, …we’re just trying to (help) local kids that have practical needs. We have that kind of advocacy for kids that don’t have advocates. I’m not just a random guy who showed up one day and said ‘Hey, let’s hang out with kids.’”

Campus Life, as both a community-based local and national organization, has such a large array of responsibilities and past involvements that, for some students, it was hard to distinguish in one clear thought exactly who or what they were. Maxey said that although he thinks they communicate their purpose very clearly outside of school, the purpose for Campus Life’s presence on a school campus may be a little confusing.

Especially for those uninvolved, the confusion over one concise goal might be a reason explaining why some students feel uneasy with Campus Life’s presence at GBHS.

According to Advanced Placement Government teacher Jarrod Westberg, it is a conflict of interest that a religious organization is at GBHS.

“If they are religiously affiliated and (openly admit they are), then it is a huge conflict of interest to be on a school,” Westberg said. “If they say they are religiously affiliated and if they are trying to push their religion on people they should absolutely not be here, in a legal sense. I am sure that that group has found the legal way to get into the school, but looking at it, if that’s what they’re doing, it’s totally wrong.”

However, the fact that Campus Life is a religious organization might not be the sole aspect that makes some students feel uncomfortable. Some students have said they are also perturbed by representatives who come to promote Campus Life – most are adults rather than GBHS students. The lack of other religiously-affiliated school clubs may also intensify a student’s discomfort.

“I think as school clubs, you should be able to have a club surrounded by your religion or talk about your religion or culture (but) if … kids were in charge of it, it would be different because when it’s adults, you feel more of a weird pressure,” Huss said. “I would be open to them having all kids running it for all different religions, all different cultures When it’s adults and it’s only one religion, it’s weird.”

Keaton Dougherty, a junior, said that he also finds the presence of adults on campus to promote a religious school club to be disconcerting. Dougherty said that he is uncomfortable that adults, rather than students, are in charge of the booth.

When asked about her thoughts regarding some students discomfort over the appearance of Campus Life at GBHS, Leighton said she would need to know more about students’ feelings of discomfort but that there isn’t any direct pressure to interact with the club.

“My understanding is that they are positive adults hanging out at the request of our student-run Campus Life Club,” Leighton said. “There’s certainly no obligation to talk to Campus Life adults, or to even go to that far end of the campus where their table is set up.  As long as they are invited by our student club, and have gone through the proper clearance channels – i.e. they’ve checked in at the office and the teacher responsible for the club is expecting their arrival – we can’t deny their presence.”

However, according to Westberg, it is also a conflict of interest not only that the group is religiously-affiliated but also that they are making students uneasy at school – a place where students should be made to feel completely at ease.

“Any group that’s here on campus should absolutely not be here if they are making students feel uncomfortable – whether it’s a Christian group (or) a Muslim group. The number one job of the school district is to protect the students – period. It is not to say ‘Well this group is okay in our eyes.’ If students are being made to feel uncomfortable they should absolutely not be on campus.”

Huss said that, to her, it seems as if GBHS is pushing an “overall ideal of what you have to be to be on this campus” by allowing Campus Life access.

Westberg also said that them being on campus is a “definite indirect endorsement.”

According to Ethan Guttman, a Jewish senior at GBHS who said he attended Campus Life meetings his freshman year with his two friends – both of whom were atheists – although he does not necessarily like Campus Life being on campus, he thinks their goals and aspirations are admirable. When Guttman was involved with the organization, he said the meeting were like a “social group for kids.”

Similarly, Destiny Valencia, a junior who still participates in Campus Life, talked highly of the social aspect of Campus Life when asked why she attends meetings.

“A couple of friends told me how interesting it was and how everybody is so nice and people are there for you so … I went and (that) got me involved,” Valencia said. “(At meetings) we hang out, we talk about God and then we’ll do activities and they’ll have food for us – so it’s pretty fun.”

“(February is) love month, so we’ll talk about parent relationships, peer relationships (and) girlfriend/boyfriend (relationships),” Maxey said. “We spend most of our time in small groups where we really listen. Our goal is (to) talk ten percent of the time and (have) the kids talk 90 percent of the time. It just allows students a venue to be heard, so it’s not a preaching thing – (like) telling you how to live your life – it’s like ‘Here’s some parameters, why don’t you tell us what your experiences are with dating or your parents or divorce.’ We facilitate conversations more than we sit and lecture about stuff.”

Although Maxey himself is not a licensed counselor, the organization does work with such mental health professionals, as well as other services.

“We certainly have counselors on staff and … nationally many of our programs work with licensed therapists,” Maxey said. “(When) we do Point Break, (which) is … an anti-bullying program (and) … an evidence-based faith-neutral all-day workshop. In those all-day workshops we do have licensed counselors and then we actually work with the school counselors and people from the police department. I’m not a counselor, so I don’t offer counseling advice … (but) we refer out and we’re mandated reporters so if something bad happens I’m the guy that calls the school. As a non-profit youth organization all of our staff is mandated reporters.”

At the school level, Campus Life serves as a club on the GBHS campus and sets up a booth once a week. Religion is never discussed on campus but is discussed briefly at meetings held outside of school.

According to the Equal Access Act, school-based clubs cannot be discriminated against over presence on campus, which is what guarantees the Campus Life club the right to exist.

“The … Act states that it’s illegal for public high schools to discriminate among student clubs,” GBHS principal Jennifer Leighton said. “Additionally, public schools have to remain neutral on matters of religion, and nonreligious matters.  That means that no adults – either employees of our school or those that come from the outside – can lead religious activities. Only our students can.”

Although they are guaranteed the right to exist as a club, Campus Life, when visiting the GBHS campus, must follow a certain set of regulations.

According to the Granite Bay High School Roseville Joint Union High School District Student Handbook for 2015-16, “student visitors are not allowed on the GBHS campus during the school day.  Pre-authorized adult visitors must check-in at the front office and wear a visitor’s pass at all times.”

Some students wonder how other organizations with a different religious affiliation other than Christianity would be welcomed on the GBHS campus,

“I’m sure (an Islamic club) would be judged a lot more.”  Dougherty  said, “I feel like there would definitely be complaints (but) I don’t know if they would be removed.”

Huss also said that she thinks the school would never allow a Muslim-affiliated club to come on campus.

However, Leighton said that she has had conversations with different students about inviting different religiously-affiliated groups on campus and that they are more than welcome.

“A Muslim or Jewish (or other religiously-affiliated) organization would definitely be allowed on campus,” Leighton said. “Students have asked me this in the past, and I’ve always answered in the affirmative.  The important distinction is that a student club/group must invite them – it can’t be initiated by their particular organization.”

In regards to their overall purpose, Maxey spoke more of their community-based approach rather than their religious-affiliation, although he says that that is also an important factor in what they do.

“I would say that there is a faith component to everything that we do. So in one sense, I don’t want to dodge the question, I don’t want to say that (faith) is not a motivating factor (because) that’s absolutely part of our motivation is (wanting) our faith to shine through our actions. But, it’s much more than that.”