Does politics affect opinions on handling the Coronavirus pandemic? 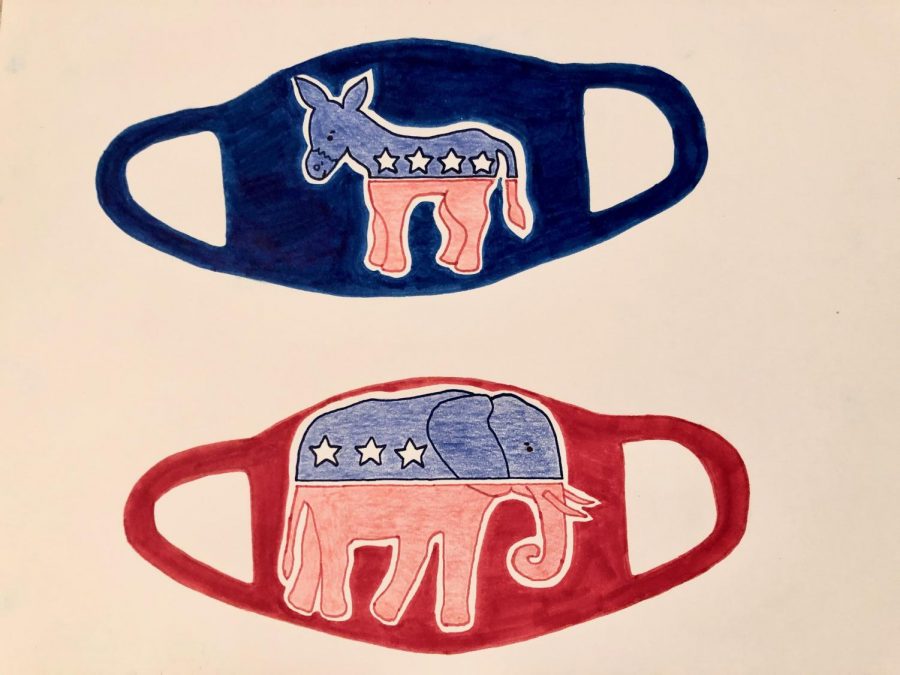 Amidst the pandemic, wearing masks in public has become a political debate.

In an empty room, the lights come up on an older man. He smiles into the camera, connecting with viewers all over America.

“Just judge this president on the facts,” said Biden in his speech at the Democratic National Convention. “5 million Americans infected with COVID-19, more than 170,000 Americans have died, (and) by far the worst performance of any nation on Earth. More than 50 million people have filed for unemployment this year, (and) more than 10 million people are going to lose their health insurance this year. We’ll have a national mandate to wear a mask— not as a burden, but to protect each other. It’s a patriotic duty.”

The following week, another older man walks up to a podium set up in front of a densely packed crowd. President Donald Trump opens his mouth, and his words are the opposite of his opponents.

“When the China Virus hit, we launched the largest national mobilization since World War II,” said Trump in his acceptance speech at the Republican National Convention. “(The) United States has among the lowest case fatality rates of any major country in the world. The European Union’s case fatality rate is nearly three times higher than ours. Altogether, the nations of Europe have experienced a 30 percent greater increase in excess mortality than the United States.”

What these candidates say and do influence thousands of people.

Currently, many people in America are arguing over wearing a mask in public places.

“On any given day, somewhere in the United States, someone is going to wake up, leave the house and get in a huge argument with a stranger about wearing masks,” the New York Times said in an article titled ‘Fighting Over Masks in Public Is the New American Pastime.’

These people are from all kinds of backgrounds and take their cues from those who lead them. Are these people divided because of the politicians?

Junior Denali Lasko is the co-president of the High School Democrats of America club at Granite Bay High School, and she believes that masks should not be a political issue.

“It’s not just putting yourself at risk,” Lasko said. “You’re putting other people at risk— your family at risk, … people who don’t have control over their situation at risk… it’s not just about you. Even if you were fine with COVID, (someone you come in contact with) might not be.”

Currently, Lasko is curled up at home attending school on a computer, with total quarantine— no hugging, no touching, no seeing any friends— everything socially distant. Lasko and her family wear masks every time they go out, and Lasko believes that masks have been politicized beyond reason.

“Instead of being about respect for others, it has turned into an argument about freedom and beliefs, which is a good discussion to have; however, I do not think it is fitting to apply it to masks when the point of them is to keep yourself and others safe,” Lasko said.

Lasko supports Biden and feels that he would help America hurdle through this pandemic.

“I think how Trump handled (the pandemic) was very short-term oriented, and I think that in addition to short-term help, Biden would attempt to provide solutions that will carry people through this pandemic and beyond,” Lasko said. “Biden, believe it or not, is not trying to hurt the economy by wanting to place restrictions on it during this time. I think Biden would have a much stronger and organized federal response to COVID-19 than Trump does currently.”

Even though they are on opposite sides of the aisle, senior Jillian Lewis, a member of the now-on-hold Republican club at GBHS— Young America’s Foundation, agrees with Lasko on the subject of wearing masks.

“It’s a sign of respect,” Lewis said. “I wear a full mask, and even though I’d vote for Trump again, I’d wear a mask regardless. I do not make a stink of it. It’s saving lives and it’s a respect thing as well.”

In addition, however, Lewis believes that the media had a huge part in creating COVID to be more fearful than it needed to be.

“I do think we should take it seriously, and… all precautions are necessary,” Lewis said. “But I do think part of the media took (advantage of the situation) and (used) it to gain viewership… just (to instill) fear among other people to take it more seriously than it really needs to be.”

Freshman Jaxon Whitnack is also a Republican at GBHS and agrees with Lewis on the position of wearing a mask and the media’s role in amplifying the issue to be one of politics.

“I think wearing a mask is necessary and you shouldn’t really complain about it much,” Whitnack said.“(However, the media is) taking (Trump’s) words and making fake news and headlines that say ‘Oh Trump supporters are wanting to kill people because they aren’t wearing masks’.”

Whitnack also agrees with Lewis that the Trump administration has dealt with the pandemic according to the citizens’ needs.

“I think (the Trump administration) has done the best that they can do,” Whitnack said. “Starting all the way back in January, (when Trump) had the travel ban from China and then in mid-March, when the virus got really bad,…(the media said) it was his fault; the people are dying because of him. (But) he only did as much as he could (do).”

Similarly, Lewis believes that the pandemic response from the current administration wouldn’t differ much if the head changed.

“If you put (the government) under anyone else’s administration, you wouldn’t see too much of a difference because we are learning more things every day,” Lewis said.

Politics aside, they all agree that wearing masks and prioritizing health and safety is the right thing to do.