No tax on tampons 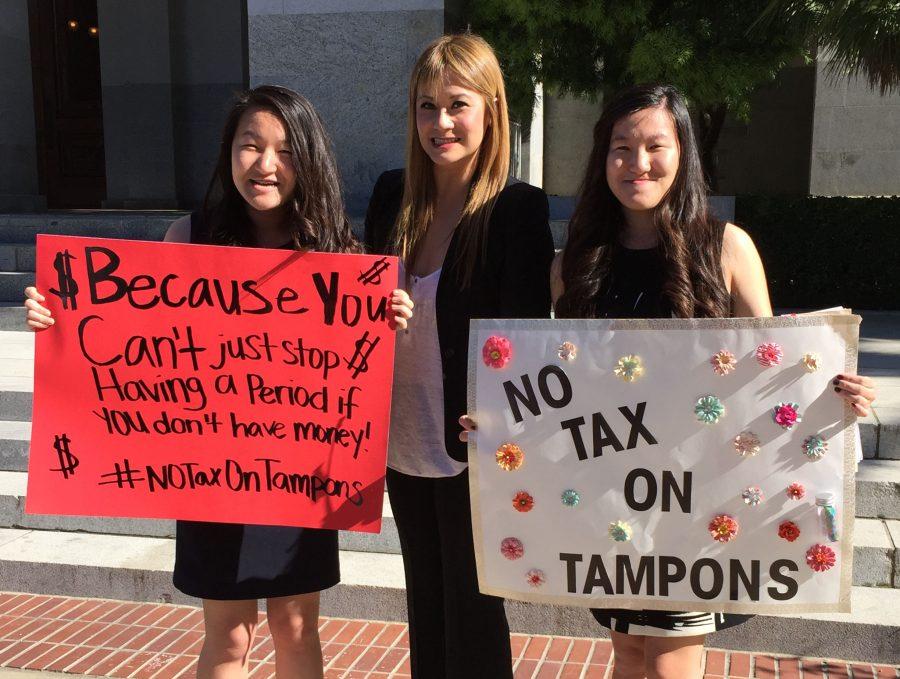 The debate over the so-called “tampon tax” –  the argument over whether or not feminine hygiene products should be exempt from sales tax – has inspired two female members of the California State Assembly, Cristina Garcia and Ling Ling Chang, to introduce a bill which would eliminate the sales tax on all tampons and sanitary napkins, period.

While California is not the first state to introduce such a bill, it is by no means a minority in the taxation of tampons  – 40 states, plus the District of Columbia, have such a “tampon tax.” In general, sales taxes are under the authority of states and are, most often, implemented automatically on all goods and services unless otherwise noted by a state government.

“It being taxed is ridiculous,” Matthews said. “Let’s say someone buys a box of tampons every month, and this goes on for, let’s say, age 12 to 50 – that’s almost 40 years worth (of buying tampons). It adds up, and it’s not like you can control that.”

The Huffington Post calculated that – assuming four tampons a day on a five-day period from a $7 box containing 36 tampons – a woman will spend almost $1,800 on tampons over her lifetime. She will use approximately 9,120 tampons, or 253-plus boxes of 36. In the course of a year, she will have spent about $47.

Using this logic, and the findings from obgyn.net that the mean age for a first-time period is just under 13 years old, the average female will have spent about $235 on just her tampons alone by the time she is 18 and a senior in high school. This cost does not factor in the price of birth control, menstrual medication such as Midol, heating pads or the occasional chocolate bar.

For the entire state of California, assemblywoman Garcia’s office found that the state would lose about $20 million of sales tax revenue per year if this bill passes.

“Given that the size of the loss in tax revenue is small – an estimated $20 million loss to a proposed budget of approximately $170 billion – it is unlikely that removing the tax would be significantly detrimental to California’s economy,” said Sacramento State economics professor Kristin Van Gaasbeck. “While the loss of $20 million will certainly affect spending on certain programs, … the loss in revenue is very small when compared with the overall size of the budget. It accounts for only 0.01 percent of the overall 2016-2017 budget, and only 0.77 percent of sales tax revenue.”

Professor George Jouganatos, an economist at Sacramento State University, said this loss in tax revenue will be minimal, especially because the money saved – which would have been spent on the sales tax – will likely be spent elsewhere.

“It will be a decrease in revenues from this particular product, (but) it may not even be $20 million if the savings are spent on something where there is a sales tax,” Jouganatos said. “Let’s say (it’s a loss of) 50 cents per month per woman … what is she going to do with this 50 cents now? Spend it elsewhere. There will be sales tax, perhaps, on that item (she buys).”

The idea of a multiplier effect – that there is a ripple effect created from purchases because one person’s spending becomes another person’s income that multiplies the effects of the original spending – helps explain why the loss of tax revenue might not be $20 million. If a woman spends her sales tax savings, that becomes someone else’s income, which then gets spent somewhere else.

Most high school females are responsible for purchasing their own menstrual products, but products such as these are sometimes made available to students.

According to Kris Knapp, the Roseville Joint Union High School District’s assistant director of the maintenance and operations department, site nurses at schools in the district are responsible for purchasing their own feminine hygiene products which are then made available to students.

At Oakmont High School, these products are not purchased but are instead donated by Kotex. This was the case at Granite Bay High School until recently.

According to GBHS nurse Jenny Serrano, the school stopped receiving donations about six months ago. She said she purchases about $60 dollars of tampons every three months to stock the restroom in the office.

Placer County’s sales tax is 7.50 percent. Given that GBHS purchases about $20 of tampons per month, after the sales tax exemption the school would save about $1.50 – or, $15 per year.

Not very significant, but savings nonetheless.

Fairness of the pink tax

Sales taxes, in general, are regressive.

“Regressive (means that) the lower the income, the bigger the burden the tax is,” Jouganatos said. “The sales tax depends on the county, but that (designated sales tax) impacts a poor person a lot more than a rich person.”

Mathews, the GBHS feminist club president, said it’s the equivalent of taxing those with a uterus … merely because they happen to have a uterus.

So what determines whether or not products such as this one are taxed?

“It is difficult to draw lines as to what should and should not be taxed,” Van Gaasbeck said. “That being said, I think it is clear that feminine hygiene products are a necessity. There are good reasons to exempt these products from sales taxes. The sales tax is regressive and disproportionately affects lower-income individuals. Since these products are used only by women and they are a necessity, the tax also disproportionately affects women.

“Taxes on feminine hygiene products are certainly regressive and disproportionately burden lower-income individuals because they are a necessity rather than a luxury. While one could argue that these products are not absolutely necessary, I would argue that they are at least as necessary as orange juice, ice cream or popcorn – all of which are exempt from sales tax in California.”

In the case of the pink tax, Assembly members Garcia and Chang have decided to attempt to eliminate the sales tax completely. But there might be different options.

For example, there are ways of making a sales tax progressive – meaning that the financial burden of the tax increases as income increases, poorer classes pay less and richer classes pay more.

“There would be ways, yes, (to make a) sales tax progressive,” Jouganatos said. “It would be complicated, and maybe not feasible. For instance, you would have a luxury tax on goods that are for luxury consumption, a higher tax rate on yachts, really expensive cars, that sort of thing. We (could also) have a return – after the poor person pays the sales tax, which is regressive, then we return the money in a different form to those who qualify. That would be a way to reverse the (inequality).”

In defense of periods

The bill will be examined by California Assembly legislative committees and might eventually be voted on, perhaps even becoming law and thus eliminating the tampon tax.

“I hope the bill gets passed,” Matthews says, “and that people see it as something that needs to be done.”