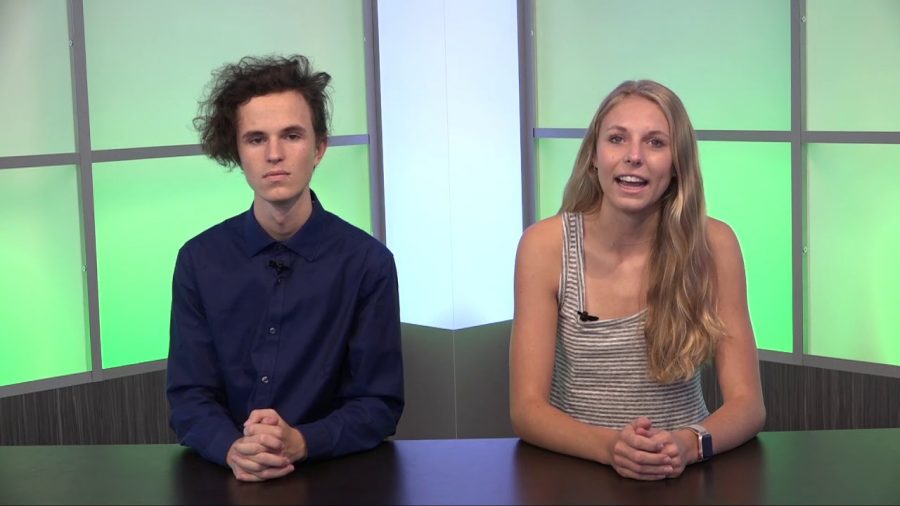 Jake Russell (left) is also one of the anchors during the GBTV bulletins.

Everyone knows about Granite Bay High School’s Emerald Brigade, but have students heard about Dream Pool or Rhonda and the Rest?

Several students at GBHS are musically inclined and bands are a perfect way for them to express their talents with others.

“As a musician, I think everybody wants the opportunity to be in a band,” said Charlotte Teemant, a sophomore at GBHS.

Teemant and her band, “Rhonda and the Rest” enjoy working together as it gives them the chance to be themselves within  a group of supportive people always there for each other.

“Being in high school and being in a band – the best parts about it are being with two like-minded people who think musically, a lot like I do, so our creative visions really get along and we can do a lot when we’re together,” Junior Jake Russell said. In addition to being part of drum line for the Emerald Brigade, Russell plays drums for Rhonda and the Rest.

Not only that, but being in a band a great opportunity for students to set aside time to hang out with their friends and de-stress, despite their busy schedules.

“I love music and I love my friends and they love music too–  so boom –a band was born,” said senior Sofia Arias who’s part of the band, Dream Pool, with fellow seniors Olivia Thompson and Keaton Brasse.

Both bands participated in this year’s Concert in the Quad event at GBHS, like many other student bands.

Both Rhonda and the Rest and Dream Pool typically don’t perform in front of crowds all the time, however they have played at certain venues, such as a cafe.

Teenagers in a band learn valuable skills regarding group work and.

“I think one of the really good things about being in a band, especially with other people, is that you have to figure out how to collaborate and work and you’re working on one common purpose and not everyone thinks the same way,” said Susanna Peeples, a music teacher at GBHS.

Sophomore Mia Peraltas is also a part of the band Rhonda and the Rest.

“There are so many great things but one of the biggest things for me is the sense of accomplishment that you get to experience with the rest of your bandmates,” Peraltas said.

Despite their love of music and how much they enjoy being in a band, the students are not quite sure whether or not they will continue with their bands after high school and pursue it as a career.

“I don’t know where life will take our band,” Dream Pool member Arias said, “But (our memories of Dream Pool) will never be forgotten.”