Music Review: All the Light Above It Too 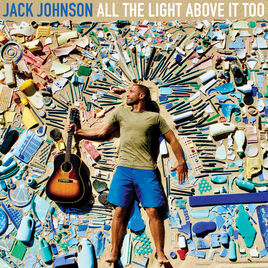 Jack Johnson continues to deliver the ultimate peaceful, comforting, ‘at the beach’ vibes with his new album All the Light Above It Too. Even the title of his new album is an indication of the optimistic feel that the songs bring. With his last album coming out in 2013, he’s had a five year gap to create new music.

It’s comforting that after all this time, his style hasn’t changed. Often artists will change their sound in order to keep listeners refreshed and on their toes. However, I don’t think this is necessary for Jack Johnson.

Maybe for pop artists, rappers, or even alternative artists but Jack Johnson, whose music has continued to exist in the same bright and cheerful tone, doesn’t need to change. In fact, I think his consistency is part of his appeal. People of all ages have been listening to him during the course of his fame and I think it’s easy to agree that it’d be quite a shame if he was anything but himself.

My love for Jack Johnson didn’t necessarily come from his actual music but the memories I have while listening to him. With his beachy feeling music, my family and I often play his music on our trips to Stinson and other northern California beaches. His music very much characterizes the sun breaking through the leaves of the trees and warm sand on your feet. And his new album falls nothing short.

Not only do his songs offer a positive feel but they also relay important and opinionated messages. In his song “My Mind Is For Sale,” he makes indirect criticisms towards Donald Trump, saying “I don’t care for your paranoid ‘Us against them’ walls.”

Like he has with many of his songs before, Johnson expresses his love for his wife through his music. In his new song “Love Song #16” he talks about building a life and a family with his wife, “And finally we made a family make a little family fill it up with children.” By singing about his love for his family, Jack further contributes to the happiness his songs create.

Jack also released the song “Fragments” that is featured in the short film “Smog of the Sea.” He was part of the journey taken to create the documentary and it inspired him to write a song about the pollution in the ocean in which he hoped his song would inform people to be more cautionary towards the environment. With many of Jack’s songs delivering a peaceful, beachy vibes, it’s perfect that he would create songs to help protect the oceans.

Jack Johnson’s new album continues to bring happiness and light to listeners of all different ages, including myself.