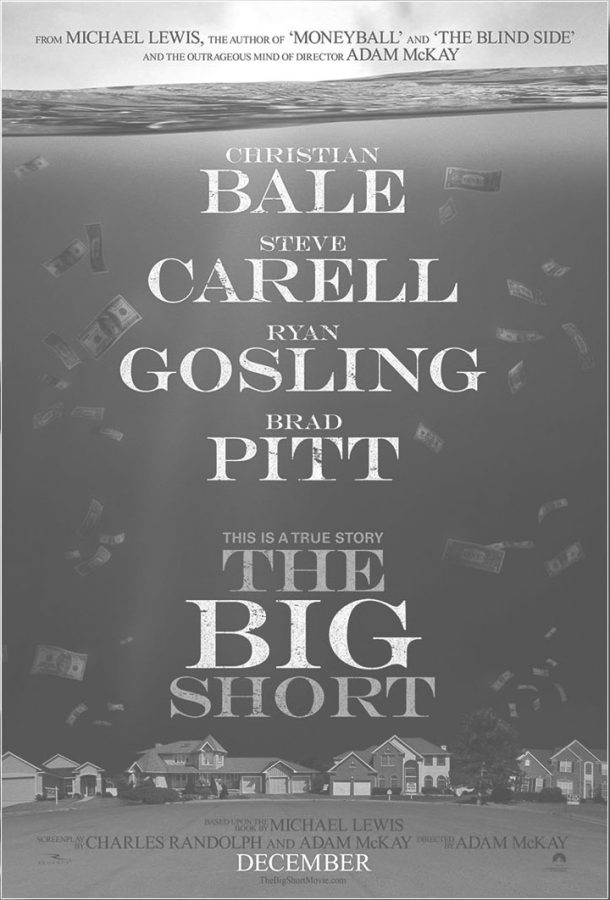 I know we’re all “supposed” to know what happened to the economy in 2009, but honestly I knew the bare minimum; something about the banks that were “too big to fail” failing. Big time.

So as a senior in the midst of my stock project, I was intrigued by the premises of The Big Short.

Basically, a couple of really smart people figured out that the U.S. housing market was built on fraudulent loans, creating a bubble that was a ticking time bomb. These really smart people proceeded to bet against the market and make millions doing it.

Happy story, right? Not exactly because the rest of the country plunged into the biggest recession since the Great Depression and dragged the rest of the world with it. The movie did a good job of getting that point across.

But at the time, I, like the average twelve year old, was in a bubble of my own.  I really had no idea of the magnitude or scope that the economic downfall had on the world.

So, walking into the theater, I had an expectation of something similar American Hustle, Argo, or maybe The Wolf of Wall Street– a healthy helping of talented cast members, a sprinkle of action and a dash of corruption. And of course, all based on a true story.

The Big Short was almost all of that, plus a couple of things I didn’t expect.

The cast, as anticipated, was phenomenal.  Steve Carell still has enough versatility to play the middle aged cynic, Ryan Gosling looks better than ever in expensive suits, and Selena Gomez can explain complicated economic concepts.

My appetite for corruption was eagerly satisfied by the fraudulent deals top Wall Street executives were making.

Although stocks, mortgages, and loans are not normally anything to rave (or rap) about, director Adam McKay (Anchorman, Anchorman 2) kept thing light and interesting, whether it be Margot Robbie explaining subprime mortgages between sips of champagne in a bathtub, or Selena Gomez drawing metaphoric parallels between Synthetic CDOs and Blackjack.

The complicated concepts that normally take a college degree in economics were explained in a comprehensive, simple way, while avoiding the point of being condescending, leaving the pride of the audience intact.

I walked away from the theater feeling like I had just listened to a two hour college lecture on economic without the boredom that normally accompanies something like that.

However, if you’re looking for a more action-forward movie, you may want to skip this one. There are no life or death situations, car chases or shootouts.

Don’t get me wrong, The Big Short  was a movie education, a “movication” if you will.  Not only was it informative, but it made me chuckle, tear up, and shake my fist in anger.

Although lacking some action, The Big Short exceeded my expectations.