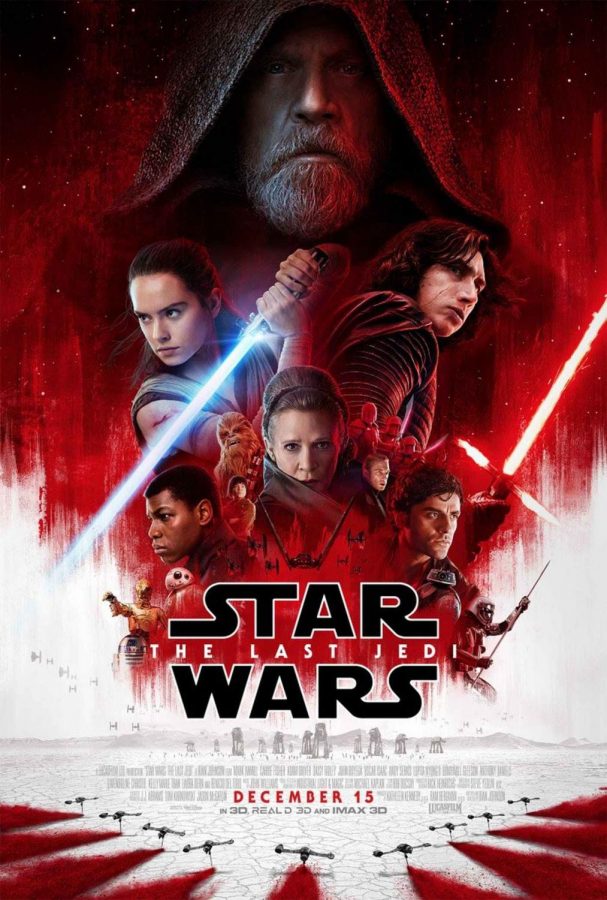 As a lifelong fan of the most famous franchise in entertainment history, I had high hopes for the eighth film in the saga – Star Wars: Episode VIII – The Last Jedi, and the promise of a fresh vision after its monotonous predecessor.

Following the events of The Force Awakens, The Last Jedi unites Rey (Daisy Ridley) and Luke Skywalker (Mark Hamill), while the First Order, led by Kylo Ren (Adam Driver), launches an assault on the fleeing Resistance.

The Last Jedi had many obstacles to overcome. Being the middle chapter in the sequel trilogy, Episode VIII had to not only answer proposed questions arising from The Force Awakens, but also expand and introduce new characters, locations, and plotlines.

What resulted was a mixed bag of wonder, uncertainty, and sheer anger.

From a visual perspective, the movie impresses; the cinematography is absolutely breathtaking. Seeing Director Rian Johnson using actual locations such as shooting on Skellig Michael, an island in the Republic of Ireland, as opposed to perpetual CGI creations is assuring.

Visual effects are also top notch. One sequence in particular is jaw dropping and nothing like I have ever seen in the franchise before.

But only so much can be achieved through pure visual spectacle, and that’s where The Last Jedi begins to falter.

A lengthy side-plot involving Finn (John Boyega) and a new character named Rose (Kelly Marie Tran) involving an attempt to locate a codebreaker is so painfully unrealistic and tedious that I began to vividly cringe in the theater.

Not only was this sequence frustrating to watch when it took away from the more meaningful segments of the film, but it also felt completely unnecessary.

The largest drawback of the movie consists of its tone. Transitioning interchangeably between serious, humorous, and didactic, all without hesitation, The Last Jedi made me repeatedly question if I was viewing an extended fan fiction cut rather than the $200 million blockbuster it’s meant to be.

For a movie so bent on shocking the viewer through plot twists and character deaths, it’s frustrating as a viewer to be treated as ignorant. Why am I being spoon fed a comic relief moment thirty seconds after an important and pivotal set piece?

A lack of vision throughout the new trilogy leaves much to be desired. Plot threads introduced previously are either carelessly resolved or left untouched, awaiting Episode IX in two years to tie up the many loose ends.

A frustrating amount of character inconsistencies are also prevalent. Without spoiling, the actions of returning legend Luke Skywalker do not match his persona from the original trilogy. Another scene involving Princess Leia Organa (Carrie Fisher) is so out of place in the Star Wars universe, I wonder how it escaped the writer’s room.

The marvelous efficiency at continuing the development and relationships of the sequel trilogies’ characters is where The Last Jedi finds its footing.

Where the humor and vision failed, Johnson’s writing excels in crafting interesting stories from Rey and Kylo. Driver and Ridley’s committed performances in selling these interactions were a high point of the film.

I find myself in a predicament on deciding whether or not I like The Last Jedi. Too many unnecessary subplots and a ridiculous amount of bizarre decisions hamper the film, but also beautifully engaging sequences made me ponder if I was viewing the best feature in the forty year old franchise.

I’m not going to ramble and complain about the “death of Star Wars” after labeling it Disney’s weakest film yet.

It is not the worst film in the franchise, nor is it feasibly great. Star Wars: The Last Jedi is flawed, miscalculated, and too experimental for its own good.