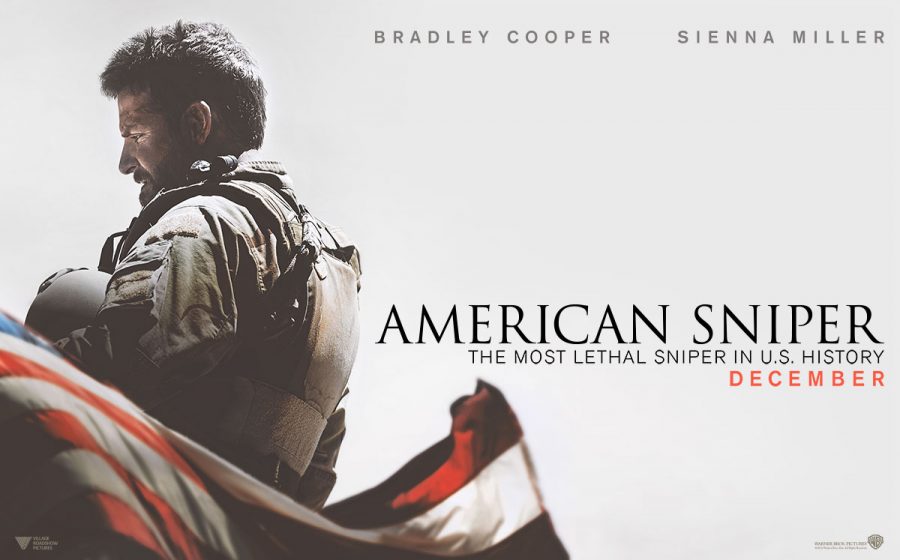 Portrayed by Bradley Cooper, Kyle is renowned for being the most lethal sniper in history, with over 160 confirmed kills. He believes it is his duty as a citizen of America to uphold the principle of “God, country, family” and dedicates his life to service in the military.

To get to the point- I’m not sure if I liked the movie. Although I do not agree with many, if any, of the things that happened in it, it was still well made.

One of the only problems I had with the actual making of it was the extremely obvious fake baby used as Kyle’s daughter. With a 60 million dollar budget, you’d think they’d be able to find a real baby, instead of Bradley Cooper having to manually move the doll’s arm. But obviously, hiring kids for Kyle to kill is more important than hiring one he’s supposed to love.

This, to me, shows where the importance of the film lies; not with the powerful recognition of mental instability and PTSD like many people argue (even though it was only briefly touched upon when Kyle shortly returns home between tours in Iraq and in the end of the movie), but with the hope of making the film as real and war-like as possible.

Which, honestly, wouldn’t even be a problem to me if the movie spent any time focusing on the brotherhood of the troops like in “Band of Brothers” or “Saving Private Ryan”, other than when Kyle’s partner is killed by the “savage, despicable, evil” Muslims (Kyle’s own words).

If the movie would have focused less on how horrible and evil of people Muslims are, I might have enjoyed it more.

I understand that all of these views are from Kyle himself, but the fact that the only “welcoming” Muslims in the film turned out to be greedy, asking for $100,00. And an Iraqi war extremist is a problem for me.

I’m not saying that there weren’t people really like this, because there were, but the film paints the picture that every Muslim or Arab is a savage, as Kyle puts it.

I also understand why Kyle is an “American hero.” Because he did an amazing job fighting for his country, he is appraised.

This movie truly is used to reinforce that America  is the best, and therefore allowed to invade foreign countries and kill its inhabitants in the name of freedom. Kyle has said he doesn’t regret killing any of the people he killed, because it was to save his fellow troops and country.

I think it’s kind of ironic that he wanted to “save” his comrades even though they all willingly traveled across the world to Iraq to fight people who were in their own country.

I truly do respect people in the military, soldiers that fight for their country. They are brave and the things they go through and have lived or died through are horrendous. But I think we need to remember that every soldier goes through these things, even ones from other countries that may fight against the United States. And, believe it or not, there are Muslims and Arabs that are also American.