A past change in approach to teaching math shows improvement 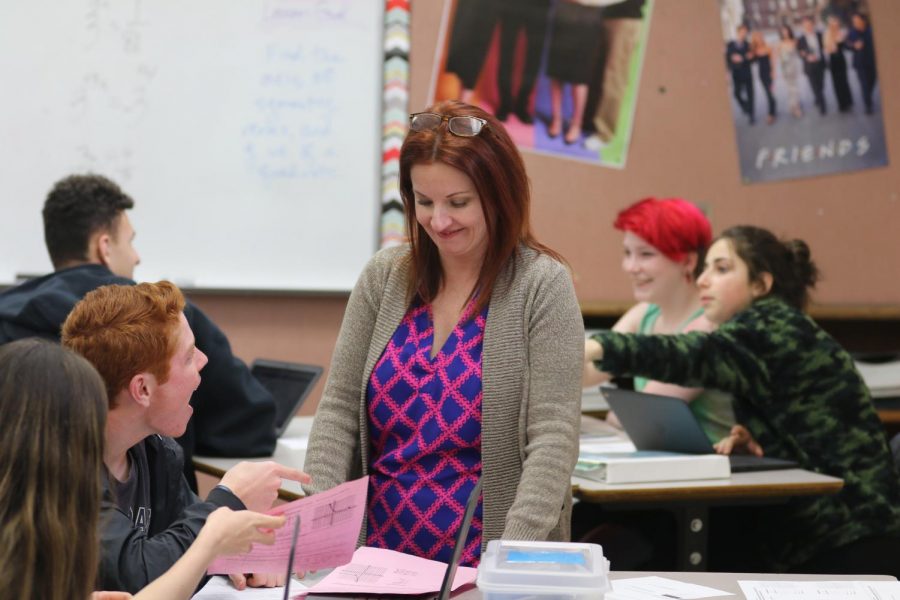 While reviewing for an upcoming test in Integrated Math 1, freshman Aiden Sanchez and math teacher Katie Farias discuss a problem.

Four years ago, the math department switched their style of teaching. Ever since then, students’ grades and knowledge have improved.

“Growth mindset is about persevering. It’s about thinking that your brain is a muscle and that it can grow with hard work, as opposed to a fixed mindset where somebody might think that they just can’t do something,” math teacher Katie Farias said.

Farias feels as if she has always taught students using a growth mindset, even before the math department made that switch as a team.

“Some of the things that we have changed (are) our grading policies so we do skill quizzes and allow retakes. I see that a lot of students that do have a growth mindset (are) benefiting from the retakes and working hard,” Farias said.

Sophomore Skyler Conley is currently in Integrated Math 2 (IM2) and believes that learning with a growth mindset is beneficial.

“It gives students kind of a chance to know that they don’t always have to put themselves down and that if they don’t know something now that’s okay because (they) can still grow,” Conley said.

Knowing that there is flexibility within the learning process is important to sophomore Kevin Seck.

“It can be really helpful for students and you know, when you look at students not learning under that growth mindset style, then they’re not really willing to learn,” Seck said.

Seck knows that having a growth mindset helps improve his will to learn even if he does not believe in himself at first.

“Personally, using that growth mindset style pushes me to focus more on the subject itself. Even though I might not be that great at it, I still keep trying to improve regardless,” Seck said.

Farias encourages students to ask for help whenever they need it because she knows it will help them in the long run.

“Growth mindset is about teaching them to ask for help and work hard. It’s okay if you fail. You learn from your mistakes. You learn from failure. So I think that’s just a good message to teach students,” Farias said.

For freshman Ryan Clark, learning with the growth mindset did not affect him in either a positive or negative way.

“Math is just kind of like common sense. You either get it or you don’t. It’s just something you study and over time your brain is either going to get it or you’re just not going to know it at all,” Clark said.

However, Conley believes that the growth mindset has brought her closer to her classmates as well as just the personal benefits.

“I get to work together with together students more, I’ve come to find, and it’s cool because we can collaborate and help each other,” Conley said.

With the teachers providing this learning opportunity, students like Seck are more positive.

“I think Mrs. Farias is doing a really great job, and I think the growth mindset it definitely helping,” Seck said.