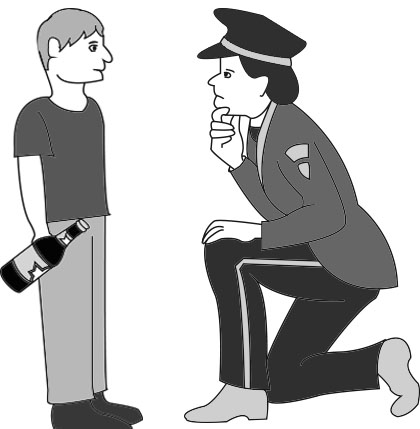 Underage drinking is notorious for being both a popular practice for and potential danger to high school students.  Businesses and employees who sell alcoholic beverages, or adults who buy these products for minors, knowingly break the law–and a few Granite Bay High School  students are now on their way to stop them.

GBHS currently runs undercover operations, informally known as the Minor Decoy/Shoulder-Tap Program; in which students travel with officers to test local businesses on whether or not employees or other adults will sell or buy alcohol for these decoy students.

The programs was put into place by the Department of  Alcoholic Beverage Control (ABC), which is a California state government agency focused on regulating alcoholic beverages.  They were established in 1987 and have been successful ever since.

Deputy Gregg Hopping, GBHS School Resource Officer, has been working with the students involved in the decoy program and is a great proponent to the program’s success.

“The goal (of the program) is awareness and education: educating both licensed businesses, their employees, and also the community about dangerous situations with alcohol use and abuse,” Hopping said.

Hopping is instrumental when it comes to facilitating the program with GBHS students, although it is the student ‘decoys’ that are doing much of the work.

“We call them operations because they’re really not ride-alongs because (the students) are not just observing, they are participating,” Hopping said.

As for the process itself, student participants are responsible for quite a bit of action during operations.

One senior boy has been working on these sting operations for some time, and hopes to continue in the future.  He, along with other students referenced, must remain anonymous in order to preserve the intention and integrity of the decoy program.

“During the decoy operations I either have to show my legal ID or tell them I’m underage before they buy or give me the alcohol,” the senior boy said.  “Once I was served or obtained the beer, I text the officer and let them know, then they pull them over once they leave the public location or go into the restaurant or store and bust them.”

The program’s operations will either be focused on exposing employees and businesses who sell alcohol to minors, or on catching adults who buy it for minors (known as the ‘shoulder tap’).

One senior girl, a new agent with the program, is familiar with the latter.

“I’ve only gone once, but over the night we had to go up to people and ask them if they would buy us alcohol,” she said.  “If they said yes, once they gave it to us we would go around the corner and get into one of the sheriff’s cars and they would find the person and ticket them.”

There are, however, lots of specific expectations of the students in order to not confuse adults.  Participants must  make it absolutely clear that they are minors so that violators are fully aware that they are breaking the law.

“They cannot lie about their age, they cannot wear hats, have facial hair, or extra makeup, (and) they can’t wear college apparel, or they may cause the individual seller to believe that they are a college student,” Hopping said.

Student participants have gotten involved not only because they have a unique opportunity to be an undercover agent, but also because they realize the adverse impact that alcohol has on minors.

“I don’t drink, smoke, or party therefore I have no personal experience in the effects,” said the senior boy cited earlier.  “However, it is a major issue with teens and all we do is help minimize the issue little by little.”

“I  have a ton of fun on my weekends and what not without any substances in my body,” he said.   “Plus, I remember my fun times.”

Another senior girl also has something to say when it comes to underage drinking, especially with the potential that many teens have to drink and drive.

“Accidents are happening every day and it is just dreadful,” she said.  “We need to make a change and find a solution to cause less disasters.”

To the senior girl, the problem goes further than a teenager making a poor decision, which is the basis for the decoy program in the first place.

“To store owners selling alcohol to minors: bad decision,” the senior girl said.”Store owners and clerks should be the smarter person and not sell Keep teens safe and keep the road safe.”