Kaiser engineers going on strike turns into a month-long standstill

Engineers at 24 Northern California Kaiser locations began striking on Sept. 18, due to what they consider unfair wages. A month later, the two parties have not come to a conclusion. 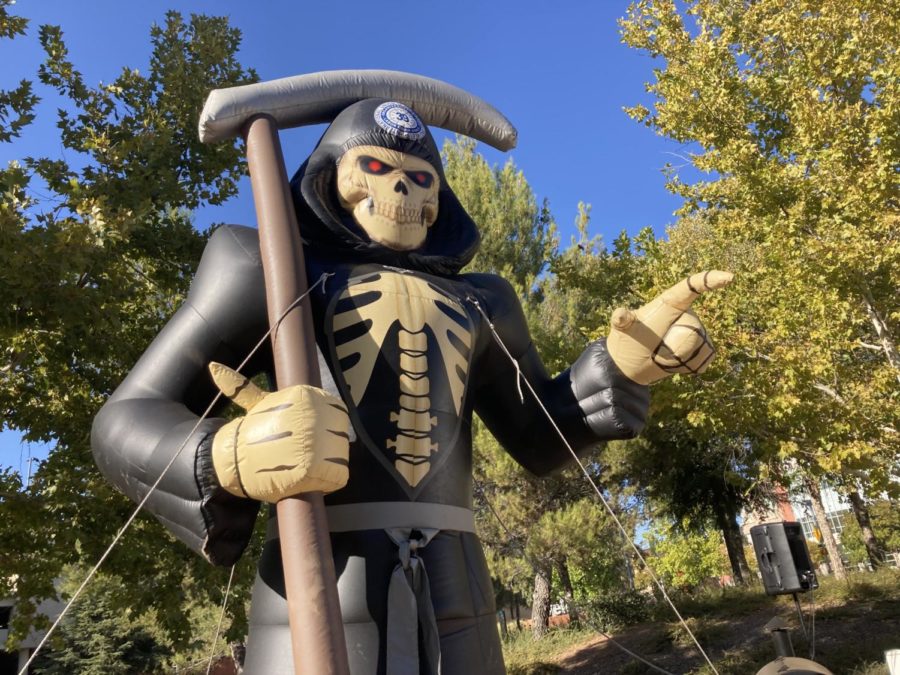 Local 39 engineers are stationed outside the Kaiser Permanente located on Eureka Road. Their strike is comprised of two tents, around a dozen engineers and the inflatable grim reaper pictured above.

It has been more than a month since over 750 Kaiser Permanente engineers began their strike at 24 Northern California locations.

The strike began on Sept. 18 and is primarily being carried out by the International Union of Operating Engineers (Local 39 Stationary Engineers) in protest of what they consider unfair wages.

“Three years ago they gave us this contract that lasts three years and in that contract they gave us three percent for each year and we got a 401K and a pension,” biomedical engineer, Guy Bernstein said. “This time they come up to the line right before we go off to strike because we put in our ten day notice that we were gonna have a strike because they wouldn’t come to the table with us. They said they would give us one percent.”

In addition to reduced pay relative to the rising cost of living, Kaiser’s proposed contract would allow the hospital to move workers to different locations, in order to combat understaffing and to lower expenses.

These factors led the union to go on strike.

“My ideal situation would be that Kaiser would come in with a (wage) equal to the cost of living. For me personally, that would be great,” biomedical equipment technician, John Southward said. “Kaiser waited till the last minute and offered less than half of what everybody else is getting in the area.”

The day after the strike officially began, Kaiser issued a public statement. Notable points in the hospital’s statement include Kaiser providing $600 million in employee assistance during the pandemic, operating engineers in Northern California receiving an average of $120,000 a year and Kaiser negotiating with the union nine times since July.

Kaiser is seeking no takeaways in their contract proposal with Local 39.

“We have an incredible workforce and will always treat them with dignity and respect, which includes providing our employees with excellent, market-competitive wages and benefits,” Kaiser said in their statement. “Unfortunately, this union frequently uses strikes or the threat of strikes as a bargaining tool in its contract negotiations with Kaiser Permanente and many other employers.”

Each camp has a different perspective on the negotiations. While Kaiser has said that they are “committed to continue to negotiate in good faith,” members of the strike are skeptical.

“I don’t foresee (change) until something bad happens and that forces Kaiser to come to the table for a real negotiation. They have not really been negotiating with good faith and then they give incrementals that are so low that it is laughable,” John Southward said. “They have been pushing us out longer so we basically starve to death on this strike.”