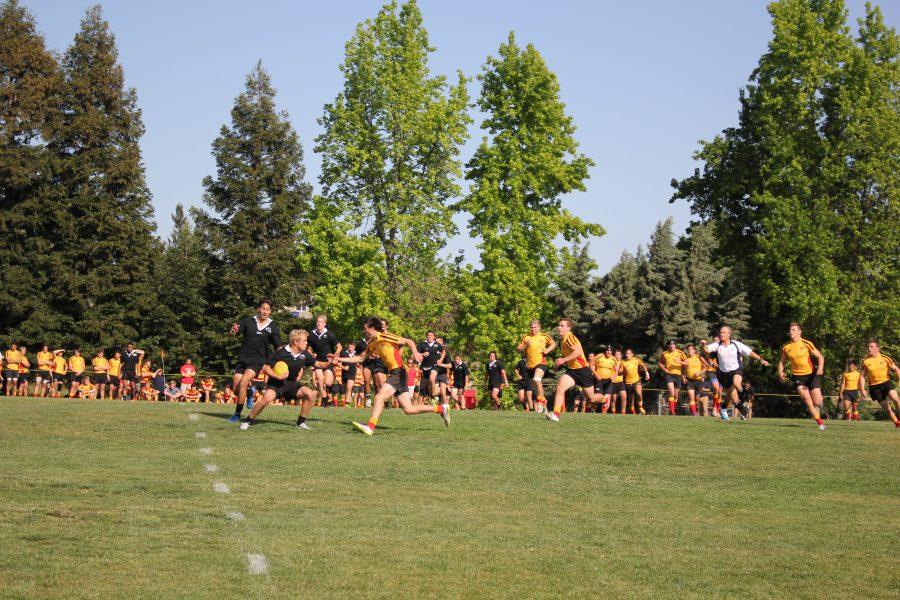 For the first time in history the Granite Bay Rugby team has been selected to play in the 2015 Boys High School National Rugby Championship.

The tournament is set to take place over the course of three days, in North Carolina from May 14-16 this year.

Senior Sean Nogrady said it’s a fairly competitive process even after you’ve been selected to go to Nationals.

To be selected for the tournament, a team’s history and current standings are reviewed.

“The biggest challenge our team faces is how physically demanding the national tournament is,” Rogers said.  “It’s three games in three days and we have to prepare ourselves for that kind of tournament.”

Though a tough feat to achieve, the players are doing everything in their power to prepare in hopes to excel at the national tournament.

Jason Divine, who is in his third season as a coach for Granite Bay Rugby said he has started making practices more challenging.

“We have to keep progressing so we can play our best rugby at Nationals,” Divine said. “We’ve introduced ramp ups in training to make the players hard like iron and fitter than the opponent.”

In the midst of preparing mentally and physically for Nationals, Granite Bay Rugby has managed to stay undefeated in it’s season thus far.

“The season is going very well,” Divine said.  “Our goals for the rest of the season are simple —Beat Jesuit. Win Nor Cal. Win Nationals.”

The team holds itself to high a standard with a plan to remain undefeated. Although they have not yet lost a game, the players said they are still disappointed that some of their rivals  scored against them.

The Granite Bay Rugby team is unusual because it is a club team, and not a school team. Being a club team allows it to have players from other schools, like Oakmont High School, on the team.

Though a majority of their players go to GBHS, there are a few that go to OHS and commute over to play with GBR.

The level of physical training required is quite high in order to succeed in rugby.

“Rugby is a sport where you have to be able to do everything when playing,” Rogers said.  “You can’t just play defense or just play offense — you have to know how to play every aspect of the game.”

The players have to know all parts of the game, making rugby so distinct from other sports where players often specialize in just one or two aspects of the sport.

This year, there is no all inclusive California state championship game, but the team still plans to win the Northern California Championship before competing at Nationals.

In 2013, although GBR won the state championships, they still did not qualify for Nationals.

“Last year we made it to the quarterfinals of Nor Cals and lost to Hayward,” Rogers said.  “This is the first time we have been to Nationals (and) my goals are to win both NorCals and the National Championship.”

Players and coaches alike are hungry for a victory at Nationals with few other goals in mind.

“We are not going for the continental breakfast.” Divine said. “The goal for Nationals is to win. We’re going to let everybody know we’re here.”